For Israeli souk’s old-timers, healthy Mediterranean diet is no secret 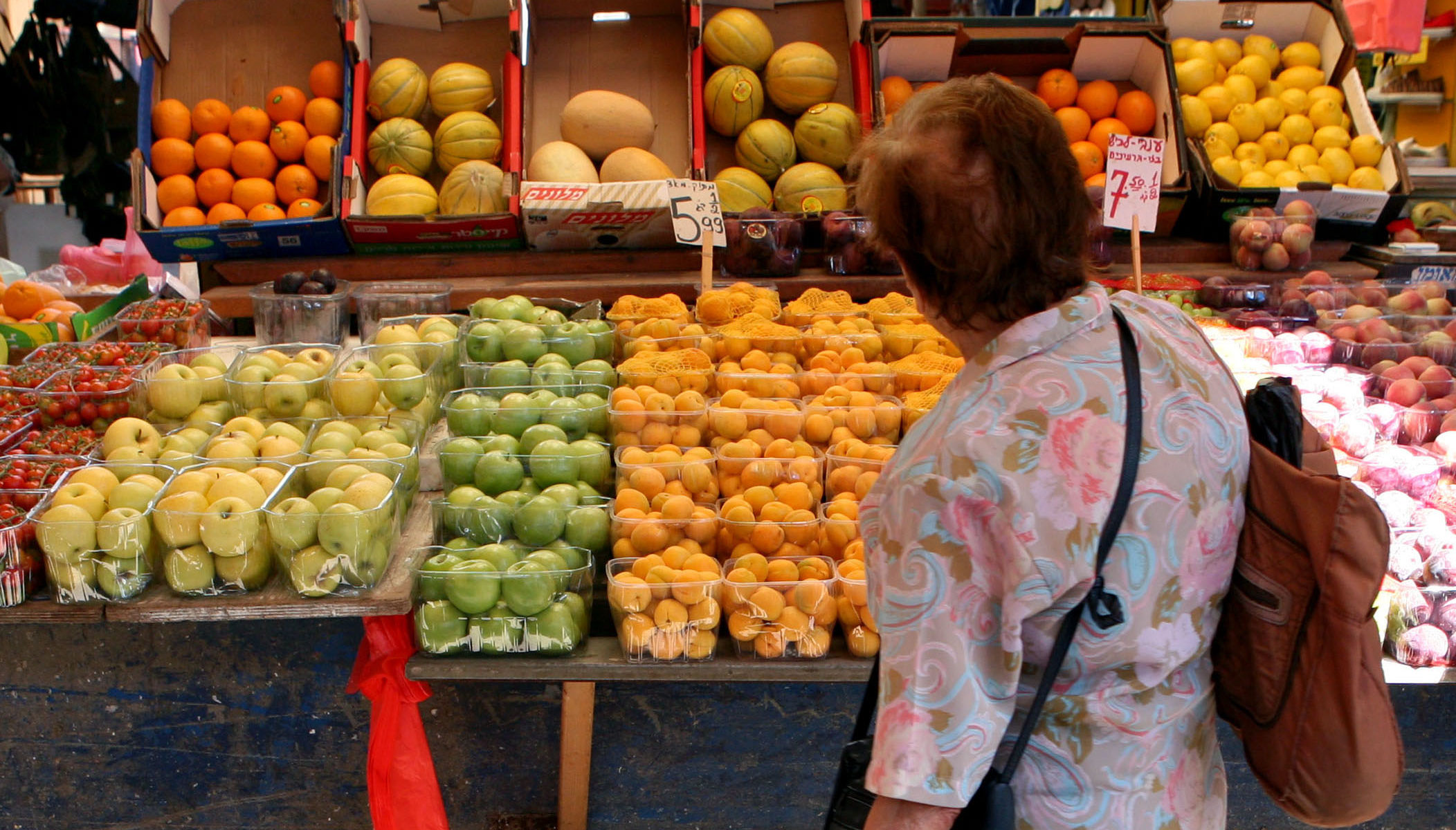 TEL AVIV (JTA) — Puffing on a cigarette, Amnon Tubi says he always knew what scientists only recently have proven about staying healthy.

“I knew that Mediterranean food is the best,” he said, surrounded by tables overflowing with tomatoes, cucumbers and oranges. “The legumes are healthy. There’s a lot of fiber.”

Subtract the eggs, and what’s left are some of the recommendations from a comprehensive dietary study published last month in the New England Journal of Medicine, which found that a Mediterranean diet can reduce the effects of heart disease by up to 30 percent.

The study makes the Carmel Market, the one-lane pedestrian bazaar known to locals simply as “the shuk,” seem like a health food store. Along the souk’s narrow, cramped and sometimes smelly corridor, there are at least three natural fruit shake stands, two stores specializing in varieties of olive oil, several fish shops and endless rows of produce.

Which stand gets business often depends on which grocer can yell the loudest. And some of the market’s most voluble salesmen are happy to point out what they’ve long known about their product.

“I always knew it, of course,” said Yossi, who has worked in the souk for 30 years selling potatoes, onions and garlic. “Mediterranean food is spicy. In Israel, it’s healthy. American food is disgusting. It doesn’t have natural ingredients.”

Tucked away behind one of the vegetable stands is a small doorway, framed in blue and white, whose sign simply says “Hummus.” The restaurant, which has gained a local reputation, is housed in a former synagogue and the food is prepared in full view of the patrons. Employees glop hummus on a dish from a metal bin, scoop in some beans from a large pot, add a sprinkling of spices and maybe some onion. What comes out is the Israeli staple snack hummus ful, or bean hummus.

“It’s made from a natural process without any chemicals,” said Dror Zaidenberg, noting that hummus helps reduce fat and high blood pressure. “Jews and Arabs have been eating it for 5,000 years. Our day-to-day movement is better.”

But even hummus is too unnatural for Yossi, who said that his dietary staple is one of hummus’s core supplements, tahini, the sesame paste he calls “the original material, the most natural and the healthiest.”

American cuisine has had a growing presence in Israel over the past few decades. At the market’s entrance is a large Burger Ranch, Israel’s answer to McDonald’s. If you prefer the original article, there’s a McDonald’s less than a mile away on Rothschild Boulevard. Greasy pizza is ubiquitous here, too, and French fries are a common add-on to falafel.

Other grocers in the souk also claim not to feel threatened by the encroachment of U.S. fare. And they’re not shy about insulting its enthusiasts.

“They don’t know how to eat,” Tubi said. “They just have sandwiches and steak.”

For Tubi, a Yemenite Jew, Americans are hardly the only poor eaters. Ashkenazi Israelis, he says, are just as bad. “Ashkenazim are spoiled,” he said. “They don’t know how to cook, so they go to restaurants.”

Tubi says the superior eating habits of Middle Eastern Jews have far-reaching implications. “Why is Eyal Golan the best singer?” Tubi said of the Israeli pop star of Moroccan and Yemenite descent. “Because he eats healthy food.”

Chaim Bitran, who runs one of the souk’s fruit shake stands, concurs with Tubi’s sentiments.

“All of the Americans are fat, white and sick,” he said, adding that bottled juice from a grocery store is “a waste of time.” Either drink juice within 20 minutes after it’s squeezed, he said, or don’t drink it at all.