Joan Rivers holding a sign in support of a gay Israeli couple that reads, "I want them to have a baby too!" (Courtesy A Wider Bridge)
Advertisement 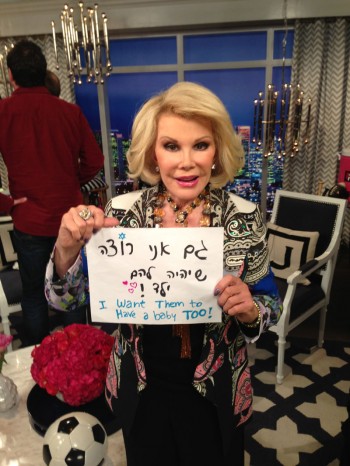 Joan Rivers holding a sign in support of a gay Israeli couple that reads, “I want them to have a baby too!” (Courtesy A Wider Bridge)

NEW YORK (6NoBacon) — Yuval and Liran, a gay Israeli couple, want to have a child — and they are using any help they can get, even from Hollywood. Joan Rivers and Kelly Osbourne have joined a campaign to help the couple by posting photos of themselves holding a sign in Hebrew showing their support.

A Wider Bridge, an organization that connects the Israeli and American LGBT communities, first brought the story of Yuval and Liran to the Internet. The couple started a campaign to legalize surrogacy for gay couples and are trying to raise money to have their baby in the United States.

The “Fashion Police” stars joined the campaign, posting photos of themselves holding A Wider Bridge signs on the organization’s site that read, “We want them to have a baby too” in Hebrew.

Jon Stewart is stepping down from his throne at Comedy Central this summer to direct a film based on a screenplay he wrote.

Stewart is temporarily abandoning “The Daily Show,” The New York Times reports, to direct a film titled “Rosewater,” which is based on the 2011 book  “And Then They Came For Me: A Family’s Story of Love, Captivity and Survival” by Maziar Bahari and Aimee Molloy.

“I am a television person who is accustomed to having a thought at 10 a.m. and having it out there at 6:30 p.m. and moving on, so this is a little scary, yes,” Stewart said. “But one of the reasons we are in this business is to challenge ourselves, and I really connected to Maziar’s story. It’s a personal story, but one with universal appeal about what it means to be free.”

The book is about Bahari’s arrest in Tehran in 2009, when he was imprisoned for four months because Iran believed the Canadian-Iranian journalist was plotting a revolution. Shortly before Bahari was arrested, he appeared on “The Daily Show” in a sketch about being a spy, and his Iranian captors used the footage against him. Stewart struck up a friendship with Bahari following his release and adapted a screenplay after reading his book.

Everyone is loving Babs these days. Only a few weeks after she performed at the Oscars for the first time in 36 years, Barbra Streisand is set to perform at Israeli President Shimon Peres’ 90th birthday celebration, the Times of Israel reports.

Streisand will be the opening act at Peres’ annual Presidential Conference, which is honoring his 90th birthday this year.

The event attracts some 4,500 attendees each year, including former heads of state, academics and scientists. Streisand’s performance is slated for June 18.

Mel Brooks, the Jewish funnyman who brought  "The Producers" to Broadway acclaim, is planning another extravaganza for the Great White Way.

Brooks revealed in an interview that a Broadway adaptation of his 1974 comedy “Blazing Saddles” is in the works.

“Well, ‘Blazing Saddles’ is almost there," Brooks told The Wrap. "I get the feeling that if I could find the time to write three or four more songs, it could be a bold and crazy musical,”

Brooks, 86, said he has no intentions of retiring anytime soon, and has hinted in previous interviews that he’s working on a “Blazing Saddles” show. Last year, Brooks told Broadway World he was “thinking” about it.

“A lot of it is musical already. It has a rather fanciful and fantastic tone to it," he said. "And now that ‘Django Unchained’ has literally used the N word, I think I’m in the clear. I don’t look so bad. He really used that word a lot.”

Along with “The Producers,” a 1968 comedy that featured the tune "Springtime for Hitler," other Brooks films have been adapted for the stage, though not with the same success. While "The Producers," which garnered a record 12 Tony Awards in its run from 2001 to 2007, “Young Frankenstein” arrived on Broadway in ’07 and closed in ’09 after fewer than 500 performances.

The Carrie Bradshaws among us are in mourning: Sarah Jessica Parker’s doctor says the actress has permanent foot damage and can no longer wear heels.

“I went to a foot doctor and he said, ‘Your foot does things it shouldn’t be able to do. That bone there … You’ve created that bone. It doesn’t belong there,” she told Net-a-Porter. ”The moral of the story is, the chickens are coming home to roost. It’s sad because my feet took me all over the world, but eventually they were like, ‘You know what, we are really tired, can you just stop."

The “Sex and the City” star is well known for her footwear collection. The show made shoe brands such as Manolo Blahnik and Christian Louboutin household names.

“For 10 or so years, I literally ran in heels,” Parker said. “I worked 18-hour days and never took them off. I wore beautiful shoes, some better made than others, and never complained.”

Parker is now going to have to lay off the heels for a little bit, perhaps sticking to (gasp!) sneakers on weekends.

Google approached Silverman and Michael Cera about the show, which debuted at the South by Southwest festival in Austin, Texas, on Sunday.

Silverman said her first choice for the show’s name was Josh, but it was already taken.

“We each have pages within Jash and we each can curate those pages,” Silverman told the Hollywood Reporter. “This is what we think is funny. It may not be your cup of tea, but there’s no testing involved, there’s no second-guessing of what a 14-year-old boy would like. It’s just a place to do stuff and fail or not fail.”

Silverman and company are hard at work on material for the show, which will include everything from a “French film noir trailer” to a 25-minute film starring Cera.

A sequel for ‘Oz’

"Oz" hasn’t even been in theaters for 24 hours and Disney is already looking ahead to a sequel.

Despite the film’s somewhat negative reviews, screenwriter Mitchell Kapner has been tapped to write the sequel. According to the Hollywood Reporter, the original film’s cast, which includes James Franco and Mila Kunis, seem to be on board.

“We’re all signed on for sequels,” Kunis told E! Online earlier this week.

“Wherever Sam goes, I’ll go,” added Michelle Williams, referring to director Sam Raimi. "I’d do anything Sam asks me to do. I’d get stuck in quicksand with him.”

Predictions for the film’s opening weekend estimate a $50 million to $75 million take at the box office. Producers are hoping it equals the 2010 film “Alice in Wonderland,” which hit a record-breaking $116 million during opening weekend.

Is the fictional world of CIA agent Carrie Mathison and Marine-turned-al-Qaeda operative Nicholas Brody the answer to the tension in the Middle East? Yes, according to Mandy Patinkin.

The Jewish actor, who portrays Mathison’s mentor Saul Berenson in the hit Showtime series "Homeland," traveled to Canada this week to do press for the show, which is based on an Israeli television production. Speaking with Canada.com, Patinkin said he believes “Homeland” holds the key to peace in the Middle East.

“This Jewish-looking fellow is keeping these two non-Jewish-looking creatures together because he feels that they’re the answer to the world’s problems," Patinkin said. "They both care so much; they have so much empathy towards the human race, even though they are both capable of committing horrific acts of violence. I don’t condone violence but sometimes it happens, I’m not naive."

Following a set-to with Alec Baldwin that caused Shia LaBeouf to leave his role in the upcoming Broadway show “Orphans,” the Jewish actor is fighting again with Baldwin.

“Don’t be too surprised if Alec doesn’t look up from his script much for the first few days,” the email reads. “I suspect he’s not nearly as prepared as you are. Not unusual at all when actors have a good long rehearsal time like we have. I just don’t want it to throw you. I did a reading of another play once with Alec and about 10 minutes in I thought, ‘Oh, I guess he’s just going to read it.’ ”

Baldwin apparently is a hothead and rather difficult to work with.

LaBeouf also posted an email exchange in which Baldwin complains he’s tired, to which LaBeouf replies, “I’m a hustler. I don’t get tired. I’m 26, chief.”

"In the theater," Baldwin said, "we don’t just cook the food and serve it. You go out in the garden and you plant the seeds and you grow it.”

LeBron James sent out his save the dates for his wedding, the weekend of Sept. 13 — exciting stuff for the Miami Heat superstar’s friends. Except the Jewish ones, that is — the date happens to be Yom Kippur.

TMZ obtained a copy of the invitation and notes that James has plenty of Jewish friends, inlcuding “Rabbi to the Business Stars” Yishayahu Yosef Pinto.

No word on whether James will push off his marriage to fiance Savannah Brinson to save the Jews. Maybe he’s thinking he can save money on the food.

Jacob Bernstein, the son of Jewish writer and filmmaker Nora Ephron, who died last summer from leukemia, wrote an article for The New York Times Magazine about his mother’s final days.

The article, titled “Nora Ephron’s Final Act,” describes how Bernstein remained in awe of his mother’s coherent independence throughout her cancer treatments. Ephron dealt with her illness by writing about it, completing a play about the late tabloid journalist Mike McAlary.

“It occurred to me that part of what she was trying to do by writing about someone else’s death was to understand her own," Bernstein wrote. "As she saw him, McAlary was a role model not so much in life, but in death, in the way that he used writing to maintain his sense of purpose and find release from his illness.”

Ephron’s final play will open on Broadway on April 1.

Maroon 5’s Levine is lovin’ it

Adam Levine, the Maroon 5 lead singer who has moves like Jagger and still uses a pay phone, says McDonald’s is his favorite first date spot.

“I always like to dress up in a tuxedo and tell the girl to dress real fancy. I like to pick her up and go to McDonald’s in a tuxedo,” he told Refinery 29 in a recent interview. ”It’s a good, spontaneous, romantic thing you can do that’s also cost effective.

"What if you don’t like the person? It’s only the first date. It’s the first time you’re hanging out — do something quirky and romantic.”

Levine adds, “You might be able to take her to the opera afterwards. If you don’t like her, you can just take her home. If you don’t like the person that much and you can tell it’s not going well, then you just drop ‘em off and they’ll think it was really sweet, really cool."