With the help of Knesset members, Women of the Wall get to pray 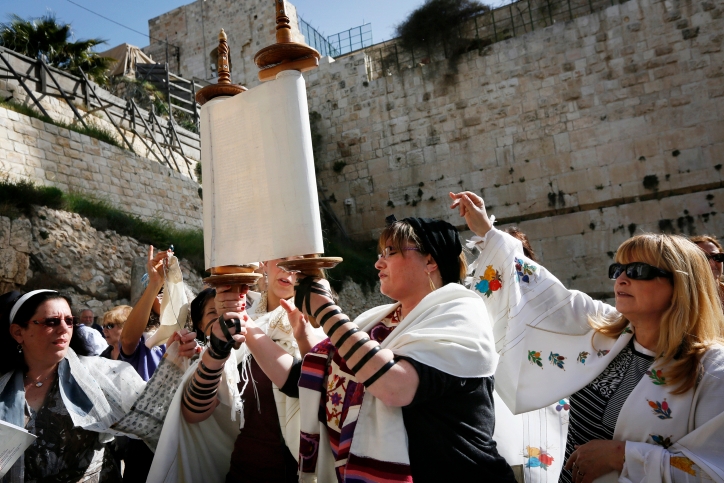 Women of the Wall holding their monthly Rosh Chodesh service at the Western Wall, in contravention of rules barring women from wearing prayer shawls or reading from the Torah at the site, March 12, 2013. (Miriam Alster / Flash90)
Advertisement

JERUSALEM (JTA) — If ever there were a gathering of Women of the Wall that was going to spark a wider conflict, Tuesday’s would have been the one.

For the past several months, police have detained members of the women’s prayer group during their monthly Rosh Chodesh services for wearing tallit prayer shawls at the site, in contravention of Kotel rules. At last month’s service marking the beginning of the Hebrew month of Adar, Jerusalem police arrested 10 women, including the sister and niece of American comedian Sarah Silverman, for disturbing public order.

“Save us!” read posters hung in Israeli haredi neighborhoods, exhorting men and women to show up at the Wall at 7 a.m. Tuesday to oppose Women of the Wall’s service. “The Western Wall will be trampled and desecrated by a group of women called ‘Women of the Wall,’ who wish to desecrate the Wall on Tuesday. Anyone who attributes importance to the place that God’s spirit will never leave will come to protest and cry out!”

Women of the Wall Chairwoman Anat Hoffman lodged a formal complaint with police Sunday alleging “incitement of violence against Women of the Wall” over the unsigned posters, known in Yiddish as pashkevillim.

This time, however, the women were allowed to pray largely undisturbed and without harassment by the police.

When 7 o’clock rolled around, only a few dozen haredim were there to protest the women, and the police were prepared. A few officers kept the haredi group away from the mechitzah barrier that separates men and women, and a few more police officers stood with Women of the Wall, who numbered more than 100.

Most of them — including Knesset members Stav Shaffir of the Labor Party, and Michal Rozin and Tamar Zandberg of Meretz — wore prayer shawls. But no one was detained or arrested, despite the 2003 Israeli Supreme Court ruling upholding a ban on women wearing tefillin or tallit prayer shawls at the site, or reading from a Torah scroll.

The Knesset members used their immunity to enter the area with their prayer shawls, while other women had men bring the shawls in for them.

The biggest disturbances the women had to deal with were a few rounds of haredim chanting and singing “They will devise a plan and it will be foiled” — taken from a prayer cursing enemies of the Jews. Later in the service, a woman stood in front of the group and yelled “For shame!” several times.

Other than that, the Women of the Wall prayed their service complete with self-assured singing.

“For 24 years, the Women of the Wall have been praying at a site sacred to the Jewish people and for years they have been stopped just because they seek to pray in their own way,” Shaffir wrote on her Facebook page. “This morning, following hate banners in the haredi press, I joined them. At first we were prevented from entering the square on the grounds we were disturbing the order but there is nothing that 100 women armed with a shawl can’t do.”

The rabbi of the Western Wall, Shmuel Rabinowitz, condemned Tuesday’s prayer service. In a statement issued to the media, he said the women brought “brothers against brothers in unnecessary confrontation” and noted that the wall next to Robinson’s Arch has been designated as the area for women’s prayer services.

“The Western Wall is the only place shared by all the people of Israel — and it is not the place to decide or express a world view,” Rabinowitz said. “I urge anyone for whom the Wall is dear to do whatever he can to keep disputes outside the plaza, and leave the people of Israel one place where there are no demonstrations, clashes and hatred.”

A spokeswoman for Women of the Wall, Shira Pruce, told JTA that she does not expect the group’s success on Tuesday to establish a precedent at the Western Wall. She surmised that the police didn’t want to arrest the Knesset members or cause a stir just before President Obama’s visit to Jerusalem next week.

Police spokesman Micky Rosenfeld confirmed to JTA that no arrests were made because of the presence of the Knesset members, whom he noted have certain immunity from arrest or bodily searches.

Meanwhile, supporters in Washington held their own rally in support of Women of the Wall, supporters in New York and Cleveland held special solidarity services, and San Francisco supporters were planning a rally for Sunday. At a demonstration late Monday in front of the Israeli Embassy in Washington, some 125 participants, including children, prayed and sang with guitars and tambourines. The women raised their arms to hold aloft prayer shawls in a show of solidarity with their Israeli counterparts.

“The words ‘A woman was arrested for wearing a tallit’ should not be coming out of Israel,” said Rabbi Esther Lederman of Temple Micah in Washington, who took her 1-year-old son to the protest.

A letter from Anat Hoffman, chairwoman of Woman of the Wall, was read aloud to the Washington crowd.

“I want to hug each of you. I want to shake everyone’s hand,” Hoffman said in the letter read by Judy Gelmen, chair of Ameinu, one of the organizers of the Washington event. “We are one in conviction that there is more than one way to be a Jew in Israel and at the Wall.”

Embassy spokesman Aaron Sagui, who went out to greet the protesters, promised to convey the group’s message to Jerusalem.