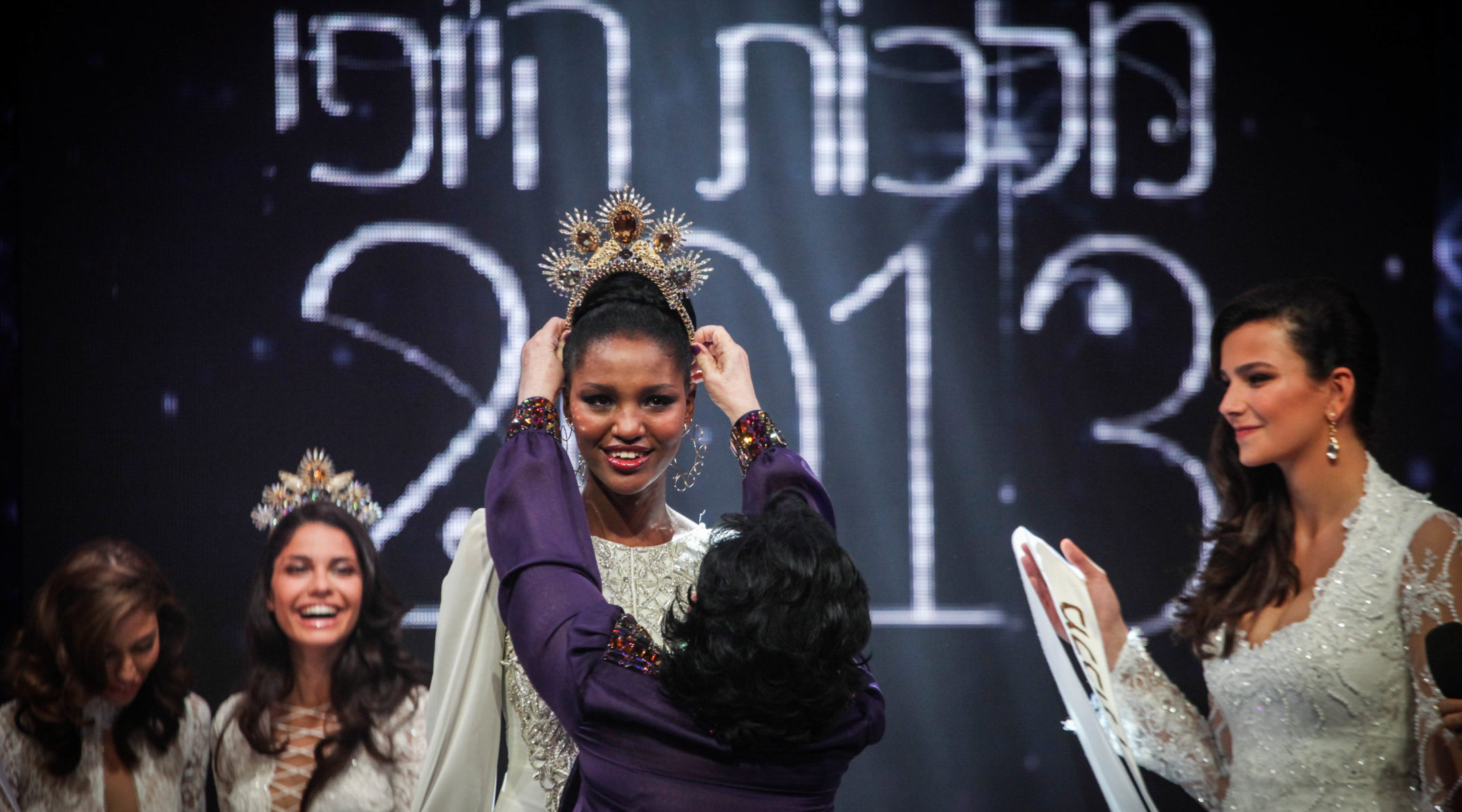 NEW YORK (6NoBacon) — Among Israelis, supermodel Bar Refaeli has been among the more controversial figures.

It’s not because people are jealous of her looks. Or friends. Or wealth. Or success. Well, maybe partly.

But more Israelis think of her negatively because she dodged the compulsory draft in the country. Refaeli married a family friend in order to be exempted from service.

Now she is at the center of a dispute between the Israel Defense Forces and the Israeli Ministry of Foreign Affairs. The reason? Refaeli will be featured in a Foreign Affairs Ministry campaign to build Israel’s image, showing products from everyday life that originated in Israel. The IDF, through spokesman Brig. Gen. Yoav (Poly) Mordechai, said that choosing a representative who escaped service sets a bad precedent for future soldiers.

Foreign Affairs Ministry spokesman Yigal Palmor responded by telling the Israeli news website Walla that the IDF had no right to get involved in its business, and that a campaign about Israeli innovation featuring a well-known Israeli beauty like Refaeli will only boost Israel’s worldwide image.

Not surprisingly, there was some name calling, too: Palmor called out Mordechai for pretending to be the “minister of morals.” Zing!

Anyway, Refaeli, who usually holds no prisoners when it comes to responding to criticism, in this case opted to stay out of the fray. In a recent Instagram photo,   Refaeli said in her caption that she didn’t care whether or not her images are used for the media campaign because she has has more followers than the main Israeli newspaper Yediot Achronot, and that she will continue to focus on issues she finds important. One apparently is the fate of Jonathan Pollard: The caption also called on President Obama to release the spy for Israel.

Serving in the IDF or not, the girl is a fighter.

Aly Raisman will be bringing some star power to the Maccabiah Games this summer.

Raisman, the U.S. gymnast who won gold at the London Olympics and recently made headlines for joining the cast of ABC’s “Dancing with the Stars,” will be competing at the so-called “Jewish Olympics” being held July 17-30.

Maccabiah organizers made the announcement at a recent news conference in Israel. Games chairman Amir Pered said the Jewish champion would be honored at the opening ceremony at Teddy Stadium in Jerusalem.

“We are very happy that an athlete like Aly Raisman, who is at the top of her game, will be coming to take part,” Pered said, according to Haaretz.

At the Maccabiah Games, which like the Olympics are held every four years, Jewish athletes from all over the world compete in 42 events at various venues. This year’s competition is expected to be the largest ever, with some 8,600 athletes from 72 countries.

Yityish Aynaw, the winner of this year’s Miss Israel competition, will be having dinner with President Obama during his trip to Israel, The Jerusalem Post reports.

Obama’s staff reached out to the 21-year-old bombshell — the first Ethiopian-born winner of the competition — for the invite to dinner at the home of Israeli President Shimon Peres. Aynaw said she was “very excited” to have the opportunity to meet Obama, as he had a “notable influence on her life” as “someone who accomplished things by dint of his hard work.”

Aynaw speculates she was invited because she is “the first black Miss Israel to be chosen and [Obama] is the first black American President. These go together.”

But Obama and Aynaw have something else in common: Both consider the civil rights activist Martin Luther King Jr. as a major influence in their lives.

“He fought for justice and equality, and that’s one of the reasons I’m here,” Aynaw told audiences during the Miss Israel competition. “I want to show that my community has many beautiful qualities that aren’t always represented in the media.”

Meanwhile, Aynaw was invited to the Friends of the IDF gala in New York last week but couldn’t make it because she was unable to obtain a tourist visa in time. Maybe she should have asked for a note from the POTUS.

Even if shock radio jockey Howard Stern did call her a “little fat chick,” writer-actress Lena Dunham of HBO’s “Girls” wouldn’t have her body any other way.

For the April issue of Playboy, the Jewish “voice of a generation” posed naked behind a white Playboy shirt and explained in an interview that she is much happier looking like an average girl than a model.

“There would be all kinds of weird challenges to deal with, I don’t think I’d like it very much,” she said about having the body of a Victoria’s Secret model. “I don’t want to go through life wondering if people are talking to me because I have a big rack. Not being the babest person in the world creates a nice barrier.”

Dunham doesn’t need to go through life pondering what people know about her rack because the actress already has broken plenty of nudity boundaries on her show: We’ve seen her topless in just about every episode, sometimes playing ping pong and other times eating cupcakes.

Speaking of cupcakes, Dunham did admit she wouldn’t mind living in the body of a Victoria’s Secret model for a day — to score some free food at restaurants.

“Then I’d call a doctor and see if she could return me to my former situation,” she added.

Paltrow talks about her kids’ diet, her miscarriage

Beyond her acting, Gwyneth Paltrow is known for some rather offbeat eating habits and love of GOOP — the detox program she created. Now she acknowledges that she has projected the dietary restrictions on her children.

In her new cookbook, “It’s All Good,” which comes out next month, Paltrow talks about how she will not feed Apple and Moses any carbohydrates like pasta, bread or rice. She does say, however, that her kids are often left “craving” for those types of food, the Daily Mail notes.

Paltrow, 40, assumes that gluten is unhealthy in general for her entire family.

“Every single nutritionist, doctor and health-conscious person I have ever come across . . . seems to concur that [gluten] is tough on the system, and many of us are at best intolerant of it and at worst allergic to it,” she writes in the cookbook.

Paltrow delineates the following foods to avoid in her “elimination diet”: coffee, eggs, sugar, shellfish, deepwater fish, potatoes, tomatoes, eggplant, corn, soy, bell peppers, dairy, meat and wheat. All of which apparently leaves room for nothing but kale and onions.

In addition, Paltrow finally spoke about losing her third child in a miscarriage that nearly killed her, too. In an interview Sunday with British You magazine, Paltrow said she and her husband, Coldplay frontman Chris Martin, suffered a miscarriage, though she refused to indicate when it happened.

Paltrow said she has desired an addition to her family for the longest time.

”My children ask me to have a baby all the time. And you never know, I could squeeze one more in. I am missing my third, I’m thinking about it,” she said. “But I had a really bad experience when I was pregnant with my third. It didn’t work out and I nearly died. So I am like, ‘Are we good here or should we go back and try again?’ ”

In addition, Paltrow admits that seeing her friend Jay-Z and wife Beyonce with their baby, Blue Ivy, has made her “very broody,” and also adds that the royal baby is “totally delish.”

Paltrow, who said she may have “missed the window” to become a mother again, had accolades for her hubby’s parenting skills.

”Regardless of what happens in our marriage, I chose the best father,” she told You. “He is so good to the children, and to know that you had kids with such a good man is like a real weight off you. We are committed co-parents, we make all the decisions together and we lean on each other for support as well.”

Sandler and Barrymore are back

Adam Sandler and Drew Barrymore are teaming up again. The duo from “50 First Dates,” “The Wedding Singer” and “Date Night” are making a new romantic comedy, Warner Bros. announced last week. Barrymore and Sandler will play divorced parents who go on a date that takes a terrible turn (yes, this sounds sort of like “Date Night”) when they find themselves at a theme park with their kids.

Frank Coraci, a Sandler expert, will direct the as-yet untitled film, which made the rounds to various studios after being pitched several years ago by screenwriter Ivan Menchell.

Sandler’s films have been on a swift decline since the days of “Billy Madison” and “The Water Boy.” His latest, 2012′s “That’s My Boy” barely grossed $37 million, and 2011′s “Jack and Jill” (starring Sandler in both lead roles) nearly made $75 million and was considered “one of the worst films ever” by movie critics. No wonder Sandler has won multiple Razzies.

Hollywood must have noticed the cute duo’s onscreen chemistry. We hope the recently de-tattooed Barrymore will be Sandler’s saving grace to prevent another sweep at the Razzie Awards.

Maybe Egypt is extra touchy because Passover is soon?

Egyptian security services banned the documentary “Jews of Egypt” from screening on the eve of its release in theaters, Reuters reported.

The film is about the advancement of the Jewish community during the 20th century and focuses on themes of tolerance and identity. Producer Haitham al-Khamissi said Egypt’s Censorship Bureau is insisting that state security views and clears the film before it hits the cinemas, although he’s already obtained a permit to have it screened.

“I’m only asking for a renewal of the permission,” Khamissi said, “but until now I haven’t received it.”

“They are worried about us, the people who think. The content is controversial politically,” he said. “After the creation of Israel in 1948, the worldview of Jews changed. There were worries that any Jewish Egyptian could be an Israeli spy.”

Khamissi said he screened the film in Egypt last year, but the permit had only allowed a few people to watch the movie. The permit he applied for this year requests the film be shown to the public — a request he says that Egyptian security will not grant.

Most Egyptian Jews left the country after the Suez Crisis in 1956, when the late President Gamal Abdel Nasser expelled Jews deemed disloyal from the country. The film’s trailer received plenty of buzz in Egypt, since there is little material produced about the Jewish community. Director Amr Ramses told the French news agency AFP that he plans to take legal action to have the film screened.

Dylan bringing rock to American Academy of Arts and Letters

Additions to the academy come from music, literature and the visual arts, and Dylan was anointed as an honorary member because of “the diversity of his work” and “his iconic place in the American culture,” said the academy’s Virginia Dajani. She added that Dylan “is a multitalented artist whose work so thoroughly crosses several disciplines that it defies categorization.”

Dylan will be inducted in May, but he likely will not attend the ceremony since he’s booked tour dates during that time.