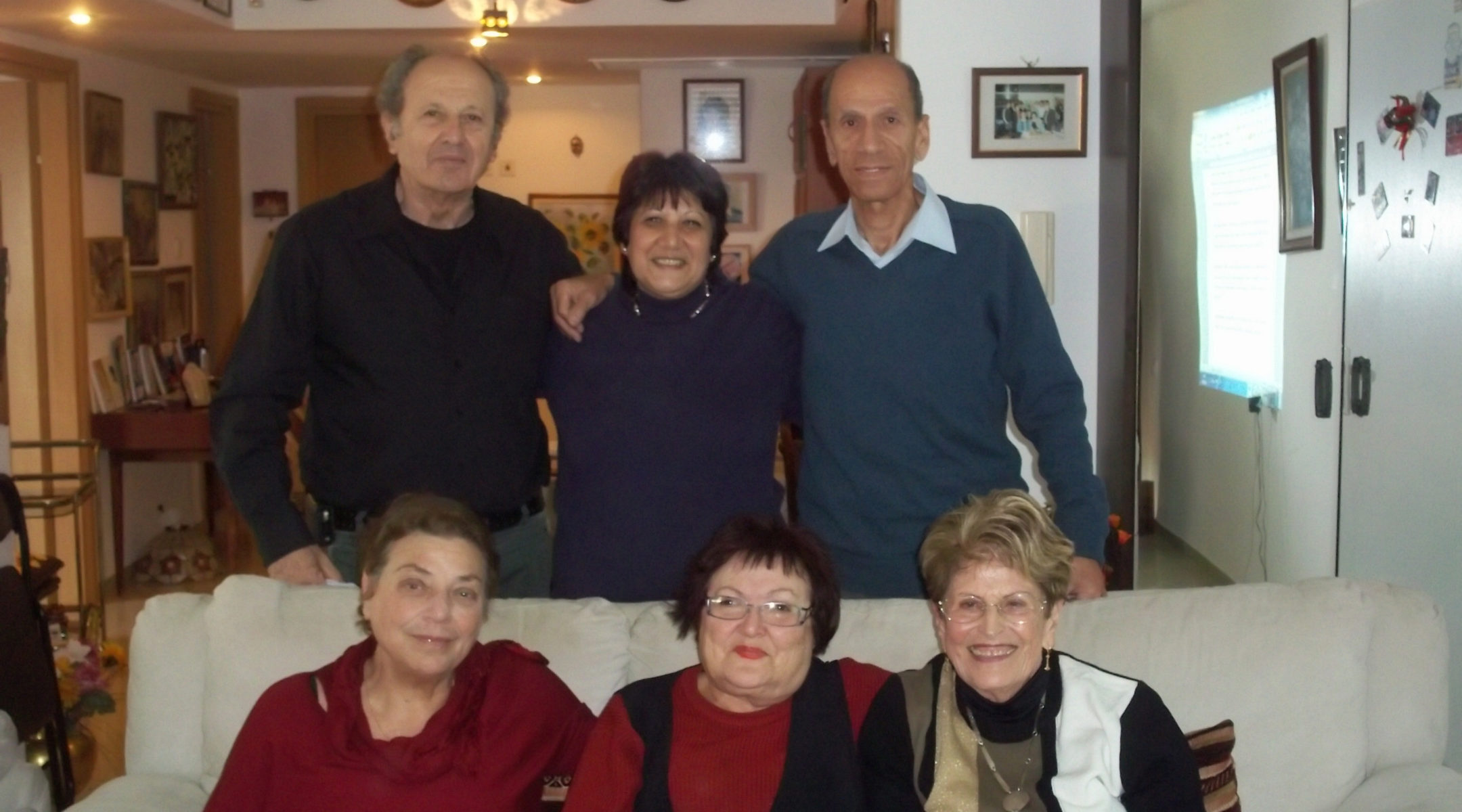 Avi Casuto sitting on his father’s lap in Cairo before their departure to Israel in 1956. (From â€œThe Golden Age of the Jews From Egypt,â€ courtesy of Ada Aharoni) 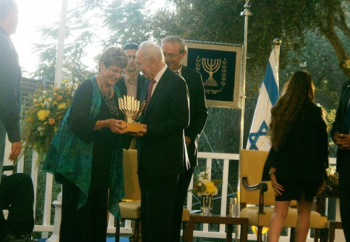 Ada Aharoni receiving an award from Israeli President Shimon Peres in Jerusalem for her efforts to promote peace through literature, 2012. (From â€œThe Golden Age of the Jews From Egypt,â€ courtesy of Ada Aharoni)

Eli Haim, right, with his parents and younger brother in Port Said in 1945 during a summer vacation, after his father immigrated from Egypt to British-ruled Palestine. (From â€œThe Golden Age of the Jews From Egypt,â€ courtesy of Ada Aharoni)

(JTA) — Frolicking with her fiance in the cool waters of the Suez Canal, Lilian Abada would never have imagined she was about to experience the first of a string of events that would ultimately lead her to flee her native Egypt for Israel with only one suitcase.

When Abada and her future husband, Nisso, emerged from the water that day in 1956, a security agent was waiting for them. The two teenagers were arrested for spying for Israel and interrogated for days. They were released and then rearrested, along with hundreds of Jews. Finally, they fled to Israel.

“We realized the Egyptians wanted us out,” Abada said.

Abada’s account of her family’s flight is set to appear in “The Golden Age of the Jews From Egypt,” a forthcoming book that aims to preserve the memory of this North African Jewish community against what many Egyptian Jews see as an attempt by the country’s Islamist leaders to blot out their history.

The rise to power of the Muslim Brotherhood last year has generated much angst in the Egyptian Jewish Diaspora, descendants of a 2,000-year-old community all but destroyed in a mass emigration in the two decades following Israel’s establishment in 1948 — a period that community members refer to as the “second Exodus.”

In the wake of the election of Mohamed Morsi to the presidency last year, there were reports that Egypt had denied entry visas to Rabbi Avraham Dayan and several others who were due to travel to Alexandria to lead High Holidays services at the city’s Eliyahu Hanavi synagogue. Services apparently will not be held there on the upcoming Passover holiday.

Jewish sources also say a nascent restoration project of some of Cairo’s crumbling synagogues has been suspended, despite the 2010 announcement by Egypt’s then-culture minister that the government would shoulder the cost of the project.

In January, a Muslim Brotherhood politician resigned as a presidential adviser after he drew international attention by calling on Egyptian Jews to return. More recently, authorities censored a film on Egyptian Jews that was to be screened in Egyptian cinemas, though the director, Amir Ramses, tweeted this week that the film will be screened later this month after producers “won the war against security forces.”

“It appears that under President Mohamed Morsi, Egyptian authorities are trying to tear out the pages about the Jewish minority from the book of Egyptian history,” said Ada Aharoni, the editor of “The Golden Age of the Jews From Egypt,” which serves as a kind of Egyptian Jewish haggadah.

A Cairo-born retired sociologist, writer and researcher at Haifa’s Technion, Aharoni initiated the book project, which is being prepared for print just as Jews around the world prepare to remember their own ancestors’ flight from Egypt on Passover. But the holiday was not Aharoni’s main consideration in terms of timing.

Living witnesses to the uprooting of Egyptian Jewry are dying out, she said. And the recent censorship of the documentary film created an additional sense of urgency.

“This film claimed Jews had it good in Egypt and left only to America and France, not Israel — and still it was banned,” she said. “The Morsi regime is determined to delete our history in Egypt and our heritage. In a way, Morsi’s regime wants to return to periods even darker than the one that caused the Second Exodus.”

The 400-page book contains 68 testimonies and will be published in Israel in the coming weeks and sold in bookshops. Though most of it is written in Hebrew, some accounts appear only in French, a tribute to the sizable community of Egyptian Jews that settled in France.

According to Aharoni, only half of the 75,000 to 100,000 Jews who left Egypt settled in Israel. Many went to France, but also to the United States, the United Kingdom and even Brazil.

One of the non-Israelis featured in the book is Aharoni’s younger brother, Edwin Diday, who lives in Paris. In the days leading up to the family’s flight, Diday felt “the same fear that we felt during World War II, as the Nazi forces of Erwin Rommel neared Egypt,” he wrote in the book. Diday says anti-Semitic caricatures were “everywhere, one showing an arm tattooed with a Star of David holding a bloody red knife.”

On an outing to the Rio cinema, a local told Diday’s parents that a gang of hooligans was coming to lynch them.

“Mom and dad took us in their arms and ran with us home, which was fortunately not far,” Diday recalls.

But Diday has other memories of roaming alone as a boy in the Museum of Cairo. And Aharoni recalls her best friend Kadreya, who was not Jewish, at Alvernia, an elite English-language school for girls situated in a well-to-do neighborhood of the Egyptian capital.

“People don’t realize it, they think of all North African Jews as one bloc,” Aharoni said. “But Egyptian Jewry lived in a European enclave in the heart of Cairo.”

According to Aharoni, part of the reason Jews were able to live in such an enclave was that 95 percent were not Egyptian citizens, despite having lived there for generations. The discrimination deprived them of equal rights, but also freed them from the duty of sending their children to Arab state schools, serve in the army or align themselves politically with any one party, Aharoni says.

To help bring the lost enclave back to life, the book features dozens of rare photographs of Egyptian Jewish life. One taken shortly before Aharoni left with her family in 1949 shows nine smiling teenagers from Maccabi Cairo, the local branch of the international Zionist sports organization. Its activities were banned a few months later, Aharoni says.

The book also contains a copy of Nissim Rabia’s 1948 Maccabi membership card with text in Arabic, Hebrew and French. Another reproduction shows the travel document Egyptian authorities gave Jewish families they expelled. Stamped on them were the words “One way — no right to return.”

Many pages in the book are dedicated to the property that Egypt’s well-to-do Jewish residents were forced to leave behind. Diday’s father, Nessim, mistakenly believed his life savings were secure at the Cairo branch of a Swiss bank; the government requisitioned the funds. Benny Roditti recalls how, just before leaving in 1956, he tried to withdraw his family’s savings from a different Cairo bank but was told the account had been “suspended indefinitely.”

Thousands had similar experiences, according to Aharoni.

In recent decades Azi Nagar, the founder of the Association for the Promotion of Compensation for Jewish Refugees from Arab Lands, tried to start restitution talks with the regime of Hosni Mubarak, whose 30 years in power ended in 2011 in a revolution that led to Morsi’s election. Nagar, an Israeli born in Cairo, also was keen to see Egypt honor its announcement that it would cover the costs of renovating the country’s synagogues.

Nowadays, Nagar says, Egypt’s tiny Jewish community cannot even get the government to approve renovations at the community’s expense.

In January, Nagar broached the issue of financial restitution in letters to Morsi, who has not replied.

Aharoni believes speaking about the loss and trauma suffered by Egyptian Jews is important but views restitution talks as a side issue.

“Yes, a staggering amount was left behind in Egypt,” she said. “But going after it is like asking a beggar for a handout.”