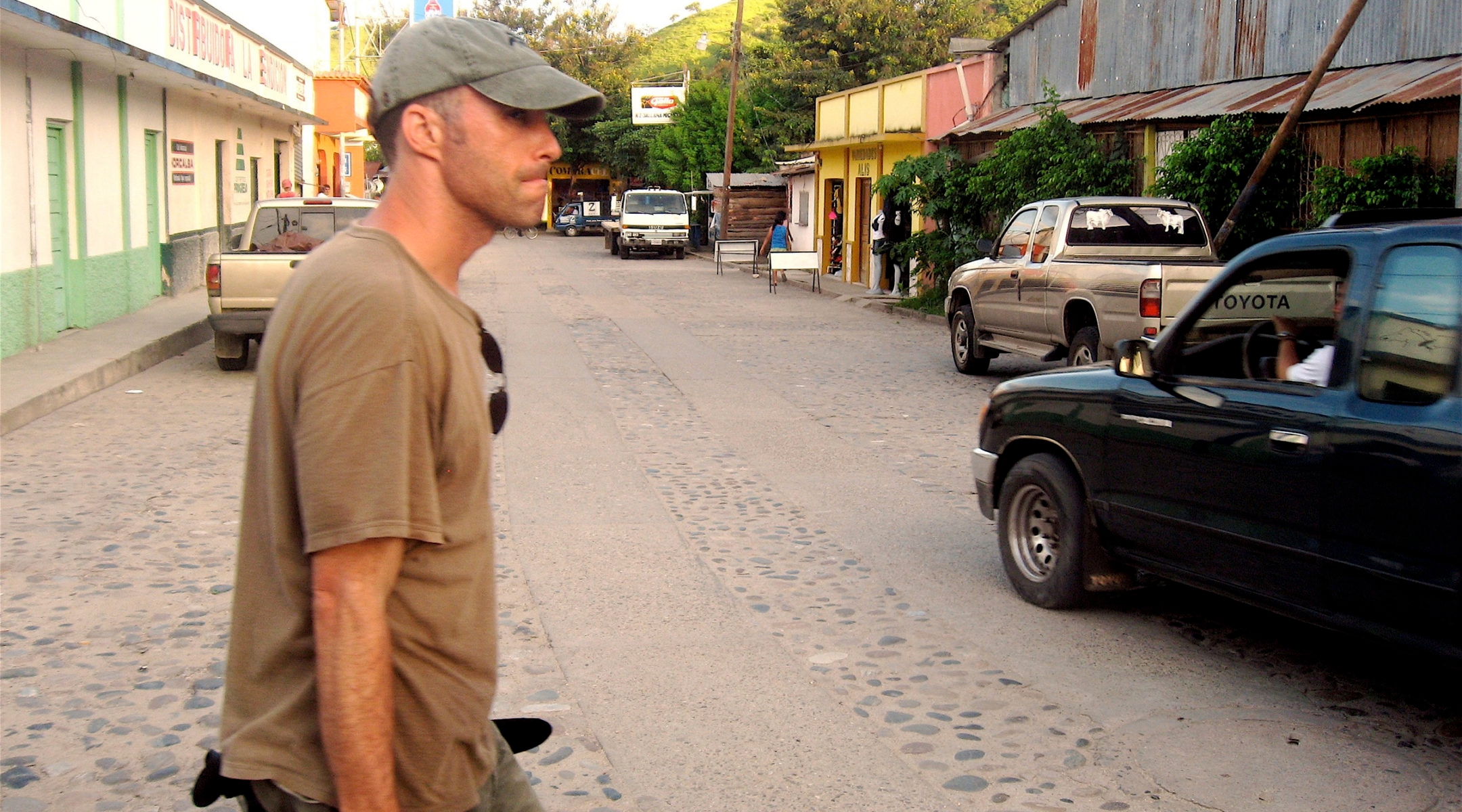 Filmmaker Boaz Dvir on location in Guatemala for his documentary on the fledgling Israeli Air Force. (Courtesy Boaz Dvir)
Advertisement

An overseas volunteer pilot helping the Israeli Air Force in its first days in 1948. (Israeli Ministry of Information & Diaspora)

LOS ANGELES (JTA) — Some 65 years after a band of foreign volunteers took to the skies to ensure Israel’s birth and survival, filmmakers are racing to bring their exploits to the screen before the last of the breed passes away.

Among the competing producers and their financial backers are such famous names as Spielberg and Lansky. And though their budgets fall well short of Hollywood blockbuster standards, their competitive spirits are just as intense.

Nancy Spielberg, the youngest of Steven Spielberg’s three sisters, is the producer of “Above and Beyond: The Creation of the Israeli Air Force.” Her main challenger is Mike Flint with his “Angels in the Sky: The Birth of Israel.” His father, Mitchell, battled the Japanese in the skies of World War II before joining Israel’s famous 101st Squadron in 1948.

Spielberg, who lives in the Riverdale section of the Bronx, N.Y., and Flint, of Los Angeles, are facing competition from Boaz Dvir of the University of Florida in Gainesville, who has been working on “A Wing and a Prayer” since 2007.

The three films focus on the overseas pilots who made up 90 percent of the fledgling Israeli Air Force in the first desperate months after Israel declared its independence in May 1948. The pilots came mainly from English-speaking countries; nearly all of them were veterans of World War II. In Israel, they were officially members of Machal, the Hebrew acronym for “volunteers from outside the land.”

Of the four Spielberg siblings, Nancy is the most connected to Israel, having spent a year working on a religious kibbutz. About 10 years ago, the Hollywood grapevine had it that Steven Spielberg was planning a feature film on the genesis of the Israeli Air Force. So when Nancy started to become serious about her own project, she alerted her Academy Award-winning brother.

“I didn’t want to step on my big brother’s toes,” she said.

But Steven encouraged his sister to go ahead, contributed a modest amount toward her $1.3 million budget and noted that if her documentary was well received, it might inspire a feature film down the road.

Spielberg’s film, which she aims to complete in 2015, is aimed at a North American audience and highlights the stories of American and Canadian fliers. She speaks of them with obvious awe.

“These men are heroes and the stories of their exploits are incredible,” Spielberg said. “It is an honor to talk to them and to show others what they did.”

Mike Flint is similarly ebullient. An enthusiastic promoter, he hardly pauses for breath — or for anything else — when describing his documentary.

“I’ve been preparing for this film all my life, ever since I heard my dad talk about his experiences as a fighter pilot,” Flint said.

Flint, the former head of the story department at Paramount Pictures, pegs his budget for the documentary at about $4 million, or three times larger than Spielberg’s. He says he has two-thirds of the amount pledged or in hand.

By far the largest backer of the film, and its executive producer, is Mark Lansky, who is also producing a film about his uncle, Meyer Lansky, best remembered as the “accountant” of the Lucky Luciano and Bugsy Siegel organized crime empires. That film, “The Devil Himself,” will focus on his uncle’s role in breaking up pro-Nazi rallies in New York, aiding the U.S. war effort by keeping dockworker unions in line, and clandestinely supplying an emerging Israel with money and weapons. The film is based on the book “The Devil Himself” by Eric Dezenhall and others.

Mark Lansky, a self-described retired businessman and financial adviser, would not give specific dollar figures, but said he and a small group of fellow investors are covering the bulk of the Flint film’s budget. The motive, he stressed, is his conviction that “those who support Israel are blessed.”

Dvir in making “A Wing and a Prayer” has the advantage of hands-on experience in the genre — he teaches documentary filmmaking at the University of Florida — and the handicap of a very modest budget of $189,000, mostly his own money.

The Israel native has interviewed 20 pilots, co-pilots and radio operators, as well as family members of those who died during and since the 1948 war.

Like Flint, Dvir has a personal link to his film, which he hopes to release to television and through DVD sales by the end of this year.

“My father told me that as a little boy in Tel Aviv, he stood on the balcony of his Tel Aviv apartment while an Egyptian Spitfire was bombing the city,” Dvir said. “Then my father looked up and saw a plane piloted by one of the Machal volunteers blast the Spitfire out of the sky. These men saved the city … but for them, I would not be here today.”

Though it’s not unusual in filmmaking for similarly themed projects to go public at about the same time, the nearly simultaneous arrival of these three films raises some questions. For one, some 4,000 volunteers from 58 countries fought in Israel’s War of Independence, the overwhelming number in the infantry, artillery and other ground forces. Two low-key documentaries about their exploits were released last year. But the lion’s share of film and media attention has been on the dashing flyboys — to the intense annoyance of the land-based grunts who always saw the beribboned airmen walk off with the prettiest girls.

The producers of the forthcoming films counter that the airmen lend themselves to more dramatic treatment and that telling the story of thousands of foot soldiers would diffuse the focus of their films.

On the question of why they didn’t pool their resources and talents and produce one major production, the filmmakers say several attempts to do so foundered on such Hollywood cliches as “creative differences” and on conflicting egos.

Dvir said he attempted to make common cause with the two other producers, while Flint said he tried several times to enlist Spielberg’s cooperation. Flint also charged that Spielberg had “lured away” some of the pilots slated to be interviewed in his production.

Spielberg denied the claim and observed that filmmaking is above all a collaborative effort. A joint enterprise with Flint, she said, “wouldn’t be the right fit.”

Such squabbles aside, the volunteers who served in the ground forces generally agree that the war was won by the Israelis themselves, who bore the overwhelming brunt of casualties in dead and wounded. Moreover, few would question that the story of the Machal volunteers on the ground, in the air and on the seas is worth telling, if only to redeem in some small measure the inaction of Diaspora communities during the Holocaust.

With the vagaries of filmmaking and shuttered projects endemic to the trade, the hope is that one of the projects, or even all three, will stay the course and preserve a brave chapter in Israel’s history for this and future generations.