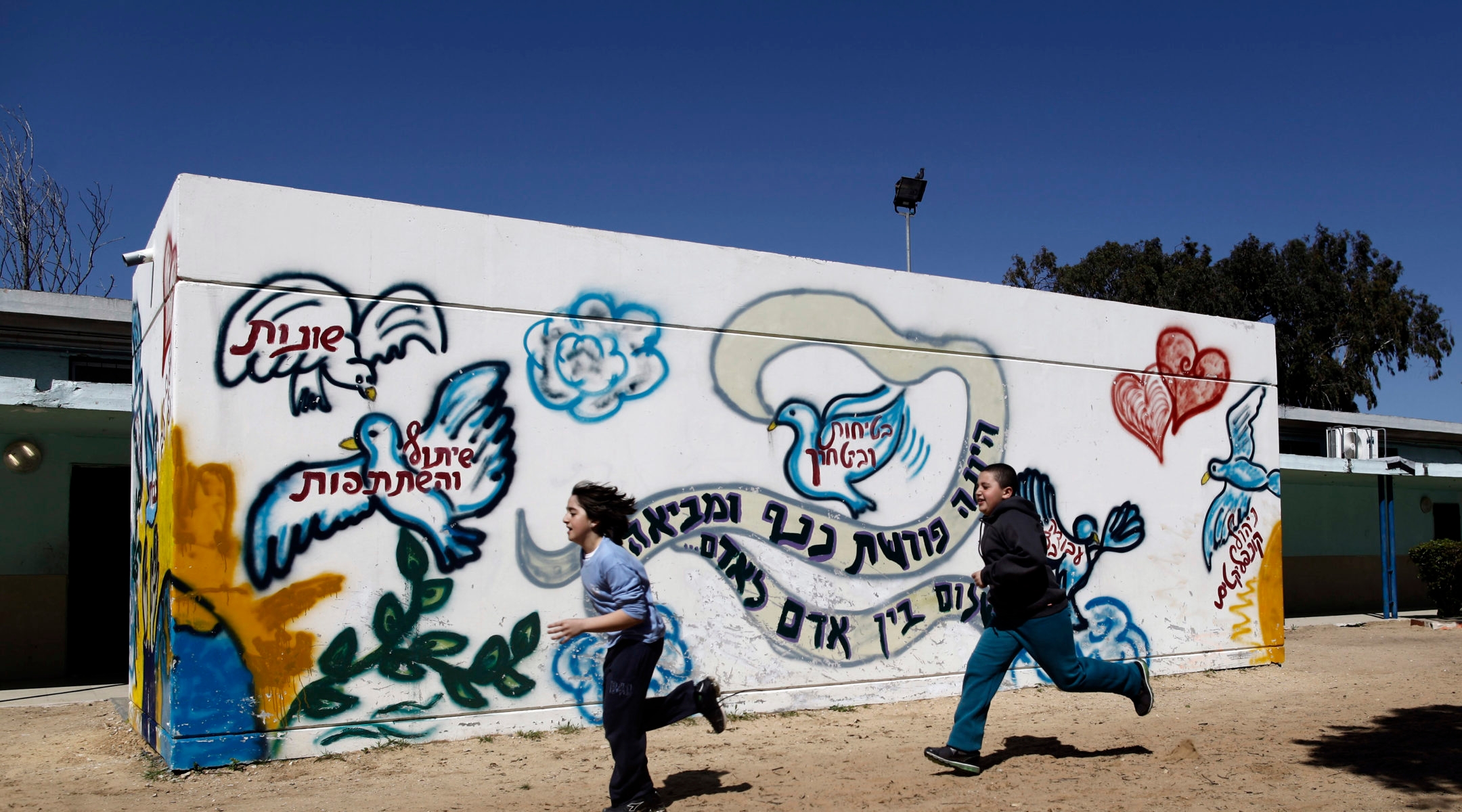 Israeli students running by a bomb shelter at an elementary school in the coastal city of Ashkelon, March 18, 2012. (Tsafrir Abayov/Flash90)
Advertisement

An app that helps Israelis locate the nearest bomb shelter was updated in response to the civil war in Syria.

The Merkhav Mugan app had been launched six months ago for southern Israelis being bombarded by rockets from the Gaza Strip. Now, with the Syrian unrest spilling over the border into northern Israel, the app will include all secure bomb shelters and areas throughout Israel, the Tazpit News Agency reported.

In addition, anyone can add information about shelters and secure spaces that do not appear on the app.

The GPS-based app, whcih was developed by the Israeli smartphone application development company i-Apps, also helps users find the fastest route to a bomb shelter, according to Tazpit.

Life behind the stethoscope

Move over “Grey’s Anatomy,” an Israeli reality series set in a Tel Aviv hospital is providing a look at life through the eyes of overworked and overtired doctors.

“Ichilov” follows the doctors from several wards at Ichilov Hospital as they care for patients.

The series, which took two years to film, is airing on the Yes Doco channel, a satellite television station.

“The idea was to tell a story through doctors’ eyes. A story experienced over their shoulders, through their eyes, through their experiences,” Israeli filmmaker Ruthie Shatz told Haaretz. “We wanted to show what it’s like to be a surgeon and the burden one carries after picking inside human bodies all day long.

“One must deal with these changes, between looking a person in the eye and being human and compassionate and being focused enough to save his live. If you’re not the best at this job, you cannot continue doing it.”

Shatz and her partner, movie director Adi Barash, decided to tackle the documentary series after Shatz and her mother were patients at Ichilov Hospital. Shatz’s mother had cancer and died, while Shatz suffered from complications of pregnancy.

Jerusalemites and visitors to the city have a place to chill — at least until the end of the month.

The Jerusalem Ice City Festival, housed in the city’s old train station, features an ice world with sculptures, a bar, and large-scale models of Jerusalem and landmarks of other world cities. Fairy tales and Bible stories also are illustrated in ice.

The second annual festival, which closes at the end of April following a run of more than two months, is part of a cultural exchange with China. The Great Wall of China also is prominently featured in the display, according to Ynet.

Two million pounds of ice were used to create the ice city using special equipment brought from China. It took 30 people to make the displays.

With temperatures in Jerusalem rising in recent weeks to the 90s, it’s a wonder the ice city has not melted away.

Academy Award-winning director Ang Lee will tackle television for the first time, directing a pilot for a show written by the Israeli writer who created the popular drama “Homeland.”

Gidi Raff’s pilot for “Tyrant,” about an American family caught up in a Middle East country, was picked up by the FX cable channel. FX announced last month that Lee will direct the pilot this summer.

It is Lee’s first project since the “Life of Pi,” Reuters reported — Lee won the Oscar for best director.

The Israeli TV network Keshet is collaborating on the series.

The new Chevy SS is off-limits here because of its name.

The Nazi Schutzstaffel, or SS, was a German paramilitary group during World War II. SS in the case of the General Motors’ car stands for Super Sport.

According to the Hebrew daily Yediot Achronot, the General Motors model will not be imported to Israel due to Jewish sensibilities.

Chevrolet spokesman Michael Albano told FoxNews.com that ” Chevrolet has no plans to export the SS to Israel.” So there.