An illustration of Natan Sharansky's proposal, which will expand the Western Wall and create a permanent egalitarian space in the Robinson's Arch area. (Creative Commons/Graphics by Uri Fintzy)
Advertisement 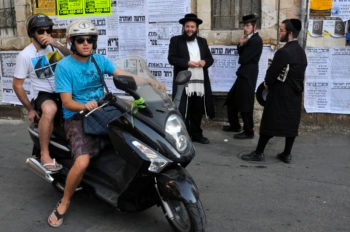 Israelis on a motorcycle piquing the interest of haredi Orthodox Jews in the haredi Jerusalem neighborhood of Mea Shearim. (Serge Attai/Flash90)

JERUSALEM (JTA) – Natan Sharansky’s proposal last week to expand the space for non-Orthodox prayer at the Western Wall could be historic.

But for most Israelis, changes at the Western Wall are of only trivial interest. Far more pressing are state restrictions on marriage and conversion, Sabbath bans on public transit, and haredi Orthodox exemptions from Israel’s mandatory draft.

The haredi draft exemption was a central issue in January’s elections for the Knesset, and it has been a hot topic of debate for the last year or so. A comprehensive bill is now in the works to draft haredi men, providing financial incentives to those who enlist and penalizing those who don’t.

A few political parties — notably the large, centrist Yesh Atid — have promised reforms on marriage, conversion and public transportation, too. But with the government’s coalition agreement giving each party veto power over any change in the state’s religious policy, sweeping changes on marriage and conversion are unlikely because the nationalist Jewish Home party is unlikely to approve such reforms.

The Orthodox-dominated Chief Rabbinate nearly has a monopoly over marriage and conversion in Israel. Non-Orthodox wedding ceremonies, interfaith marriages and same-sex marriages are not recognized in Israel unless such couples wed and obtain a valid marriage certificate overseas.

When it comes to conversion in Israel, there is only one kind: Orthodox. Non-Orthodox converts to Judaism from overseas may be granted citizenship under Israel’s Law of Return, but the Rabbinate can prevent them from marrying, divorcing or being buried as Jews once they are in Israel.

Perhaps a milder issue by comparison, many secular Israelis chafe against Sabbath-day limitations on public transit and commerce. While not entirely banned on Saturdays, they are subject to severely restrictive laws.

There have been some reforms in all three areas in recent years.

In 2010, the Yisrael Beiteinu party, which draws from a secular Russian immigrant support base, led a push for civil marriage. In a compromise, the watered-down bill passed by the Knesset legalized civil unions only for couples with no religious faith, not for Jews or interfaith couples.

Yesh Atid hopes to use that law as a template for allowing civil unions for any Israeli.

“We plan to work together on these issues,” Yesh Atid Knesset member Dov Lipman, an American-born rabbi, told JTA. “There’s already been significant discussion with all of the religious bodies on compromising on these issues. I do believe we can make significant changes.”

By some measures, the conversion issue has been thornier.

In 2010, a Yisrael Beiteinu Knesset member, David Rotem, proposed a bill meant to give would-be converts more leeway in choosing where and how to convert in Israel. But the bill also would have consolidated control over conversions under the office of the Rabbinate, further weakening Reform and Conservative conversions.

Following an outcry from Jewish leaders in the United States, the bill was shelved. Sharansky was tasked with finding a solution to the dispute, but nothing has materialized. In the meantime, Israel’s Supreme Court was subject to a freeze on hearing any cases relating to conversion.

The high court freeze expires at the end of April.

“Who is a Jew is an issue that will come back,” predicted Uri Regev, a Reform rabbi and chairman of Hiddush, an Israeli nonprofit that advocates for religious pluralism. “The courts making it a headline issue will happen within a few months.”

Public transit may be the issue most conducive to compromise because it does not involve questions of Jewish identity or continuity.

The one wild card in Israel’s religion and state debate is David Stav, a Modern Orthodox rabbi who will run for the position of chief rabbi in June. If he wins, supporters of the reform-minded rabbi say he will put a friendlier face on the Rabbinate and help unite a divided society.

But in an interview last year with JTA, the reforms outlined by Stav were mostly procedural. For example, he supports the drive to allow couples to marry under a rabbi of their choice.

Regev says the best chance for bringing about far-reaching reforms lies outside the country — in the form of the American Jewish community.

“At this point it’s all a question of applying sufficient pressure,” Regev said. “This subject can’t be pushed under the rug.”