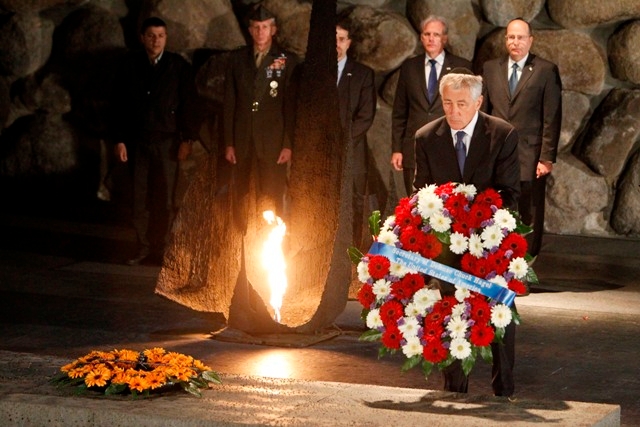 U.S. Secretary of Defense Chuck Hagel laying a wreath in the Hall of Remembrance during a visit to the Yad Vashem Holocaust Memorial Museum in Jerusalem, April 21, 2013. (Photo by Miriam Alster/Flash90)
Advertisement

JERUSALEM (JTA) — U.S. Defense Secretary Chuck Hagel arrived in Israel, where he is scheduled to discuss a major arms deal and the Iran situation with Israeli leaders.

Hagel and Yaalon reportedly will discuss a sale from the U.S to Israel of Bell Boeing V-22 transport helicopters and Boeing KC-135 inflight refueling planes, in addition to advanced radar systems for fighter planes and anti-radiation missiles.

The U.S. defense chief will leave Israel late Monday and continue on to Jordan, Saudi Arabia, Egypt and the United Arab Emirates.

Hagel told reporters Sunday on the flight to Israel that the arms deal, as well as deals to be discussed with Saudi Arabia and the UAE, should send a message to Iran that the military option remains on the table.

He also said regarding Israel and the threat of an Iranian attack that “every sovereign nation has the right to defend itself and protect itself.”

“Iran presents a threat in its nuclear program,” Hagel said, “and Israel will make the decisions that Israel must make to protect itself and defend itself.”