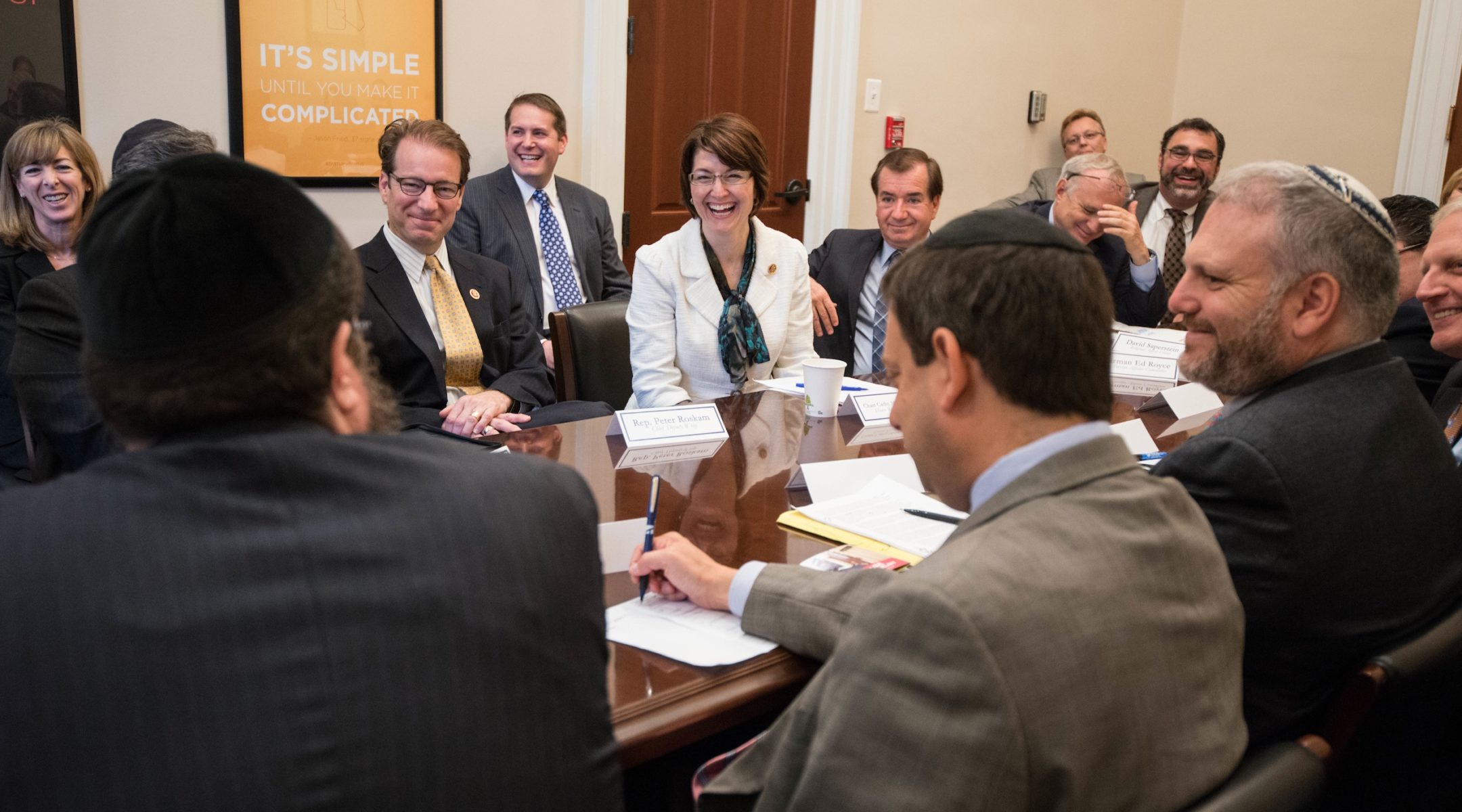 WASHINGTON (JTA) — He had them until abortion.

U.S. Rep. Chris Smith (R-N.J.) was addressing the Reform movement’s Consultation on Conscience conference about his passion — human rights — and his success in creating mechanisms to combat human trafficking and shine a light on global anti-Semitism. The crowd gathered in a large Capitol Hill conference room Tuesday afternoon was transfixed, laughing along with Smith’s practiced self-deprecation and applauding his commitment.

Until Joanna Blotner, a reproductive rights activist, asked him about his other signature legislation — a bid last year to cut all funding for abortion except in cases of “forcible rape.” Why, Blotner wondered, would Smith seek to limit women’s options?

There was a fraught silence. Smith stumbled through a series of non-sequiturs before settling on the classic congressional non-defense defense: The language cited by the woman already appeared in earlier laws.

“We went back to that,” he said, referring to a 1976 law banning funding for abortion overseas.

Forcible rape — the term implies that rape without violence is consensual — became a buzzword last year that helped topple what had been seen as two surefire GOP Senate bids, in Indiana and Missouri, and became a symbol for the party’s supposed alienation from growing swaths of the electorate.

In the wake of Mitt Romney’s sound defeat in the presidential election, Republican leaders have regularly emphasized the need to reach out to groups among which the GOP made a poor showing — women, minorities and increasingly, Jews.

Rep. Cathy McMorris Rodgers (R-Wash.), the chairwoman of the Republican Conference in the U.S. House of Representatives, hosted a roundtable recently for Jewish leaders that brought together figures who rarely find themselves in the same room together, let alone in dialogue.

Hardcore conservatives such as Republican Jewish Coalition Executive Director Matt Brooks and Sarah Stern, founder of the Endowment for Middle East Truth, exchanged laughs with liberal counterparts like Rabbis David Saperstein and Jack Moline, both of whom are known in the media for their closeness to the Obama White House.

“In order to be an effective leader, you have to reach out to the whole community,” said Nicolas Muzin, the conference’s director of coalitions, who leads outreach to minority communities.

Such GOP-Jewish confabs, while never commonplace, once were at least as frequent as the annual get-together between Senate Democrats and Jewish groups. They stopped soon after the 2000 election of President George W. Bush, whose first term was notorious for its with-us-or-against-us posture toward interest groups, and the ascension of an uncompromising congressional GOP led by hardliners such as Rep. Tom DeLay (R-Texas), the former majority leader known for seeking to crush liberal influence in Washington. Leaders of interest groups perceived as liberal — a sobriquet that characterized many of the mainstream Jewish groups — stopped having their calls to Republican leaders returned. Worse, they were told to stop trying.

No longer. After a decade in which Jewish outreach was largely restricted to a small coterie of like-minded conservative groups, Republicans are reaching beyond their comfort zone in an effort to make inroads with the wider Jewish community. Muzin said there are plans to replicate the meeting with other minority communities on the national level and to encourage lawmakers to use the meetings as templates for similar get-togethers in their districts.

Muzin gleefully described the long and effusive “thanks for the invite” voicemail he received from Moline, and how he played it back for his delighted boss, McMorris Rodgers. The congresswoman responded by borrowing the habit cultivated by Democratic politicians of injecting a subsequent speech to a Jewish group with Jewishisms.

“You may not know that much about me, but I grew up in a rural area of eastern Washington where people grow wheat and apples,” she said a few nights later as the lead GOP guest at the Israeli Embassy’s Independence Day celebrations. “We wouldn’t have known a matzah ball from a basketball.”

At the roundtable hosted by McMorris Rodgers, participants focused on shared agendas, in particular getting tough with Iran and keeping the deduction for charitable contributions at 35 percent, as opposed to the 28 percent sought by the Obama administration. Both are softballs when it comes to Jewish-Republican dialogue and have broad community appeal.

But participants on both sides of the table said they anticipate areas of disagreement, like Medicaid and Medicare, two programs popular among Jewish leaders that Republicans hope to restructure.

“On domestic policy there will be differences, and the members were well prepared for that,” Muzin said.

Evidence of the gap between good intentions and working relationships was evident during the Reform confab this week, which was top heavy with Democrats from Congress and the administration. The two Republicans who participated — Smith and Sen. Lindsey Graham (R-S.C.) — emphasized their eagerness to work with the other side, something that Democrats never felt the need to do.

Graham, like Smith, earned a warm welcome. He addressed an area of agreement with the Reform movement, immigration reform, and delivered several thinly veiled digs at Romney, whose rhetoric was seen as driving away Hispanics.

“My party has turned a corner,” Graham said. ” ‘Self-deportation’ is not a good idea.”

At the McMorris Rodgers meeting in her office, some potentially contentious issues such as immigration reform and preserving entitlements came up briefly when the organizational leaders were asked about their priority agendas. Participants, speaking on background because the contents of the meeting were off the record, said even asking such an open-ended question was refreshing.

Saperstein, the head of the Reform movement’s Religious Action Center, said the meeting suggested that the party was ready to listen.

“They could not have been more attentive, more politely responsive at the range of views they heard, more open to engaging with the community,” he said.

Royce outlined his bid to expand Iran sanctions beyond those currently targeting its energy sector to encompass virtually anyone doing business with the country — a model he said had helped moderate North Korea’s behavior in the past. Roskam discussed the charitable deduction, comprehensive immigration reform and the U.S.-Israel relationship.

Stacy Burdett, the director of the Anti-Defamation League’s Washington office, was impressed at how the meeting appeared to be more than a polite exchange. Royce and Roskam were well briefed on what interests the Jewish community, she noted, and McMorris Rodgers wrote down every suggestion.