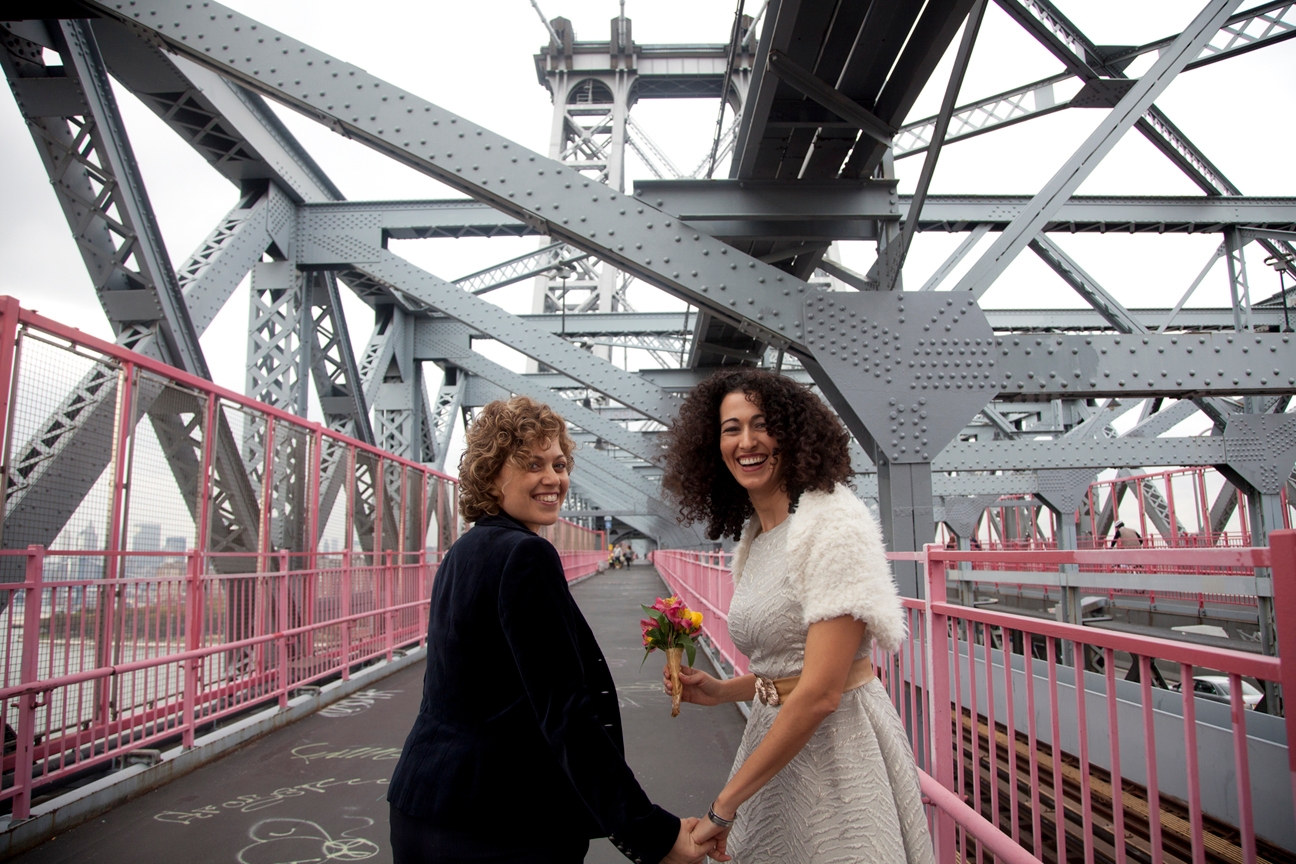 WASHINGTON (JTA) — A same-sex Israeli couple struggling against U.S. immigration laws are set to become the faces of the fight to extend one of the foundations of immigration policy to gays and lesbians.

Adi Lavy and Tzila Levy have been caught in the bureaucratic red tape of the American immigration system since Lavy, who suffers from a kidney ailment, arrived in the United States in 2011 to seek treatment.

The couple, whose New York marriage is not recognized by the federal government, have been able to stay together during Lavy’s illness and her subsequent return to Israel to care for an ailing parent thanks only to a series of interventions by Sen. Kirsten Gillibrand (D-N.Y.). But an estimated 36,000 binational LGBT couples are potentially at risk of separation should one partner be forced to leave the country.

Now the Brooklyn couple’s struggle is being highlighted as part of an effort to extend residency rights commonly granted to straight couples to gays and lesbians.

“Adi fears that she and her wife could be torn apart,” said testimony submitted last month by the Immigration Equality Action Fund to the Senate Judiciary Committee, which is considering a bill proposed by Sen. Patrick Leahy (D-Vt.) that would extend residency rights to the foreign-born permanent partners of U.S. citizens.

“She fears being left alone to face her chronic health issues without her primary caregiver and emotional support,” the testimony said. “Without a lasting immigration solution, this family will continue to face a life filled with uncertainty and fear.”

The fund, which is spearheading advocacy for the Uniting American Families Act, selected the couple in part because of their compelling story, said Tom Plummer, the fund’s lawyer. The fund receives more than a thousand calls a year, Plummer said, and he takes on only the dozen or so cases likeliest to “help move the issue” of same sex-family reunification.

“They’re a loving couple and they’re married and it’s also Adi’s health,” said Plummer, explaining why the couple were chosen as faces of the campaign. “They really need to stay here for her health care needs to be met.”

Lavy and Levy met in Tel Aviv in 2010 and have been a couple since early 2011. Lavy, 34, a Chicago-born photographer and dual U.S.-Israeli citizen, has suffered from kidney disease since her teen years. In December 2011, her condition worsened and she traveled to New York for treatment by a specialist.

Levy soon joined her on a tourist visa, and last October they married on New York’s Williamsburg Bridge. In their wedding photos, the women — Levy in a white bridal gown, Lavy in a black suit over a white top — can’t stop smiling. In one photo, a cyclist rolls by, oblivious.

Once married, Levy, 33, an aspiring screenwriter, applied to become a permanent resident. Spousal petitions are often granted for straight couples, but Levy was denied. The State of New York, which legalized gay marriage in 2011, recognized her as Lavy’s wife. But the federal government, relying on the 1996 Defense of Marriage Act, did not.

Plummer appealed for a deferred action, a mechanism that lifts the threat of prosecution of undocumented immigrants for two-year periods. Gillibrand interceded on the couple’s behalf and in February, U.S. Citizenship and Immigration Services granted Levy a stay — rare for someone who arrived as an adult.

But just as they got the good news, more bad news was in the offing. Lavy’s mother, who had been in remission from cancer, relapsed and Lavy returned to Israel to be with her. Levy wanted to join her but could not; immigrants enjoying deferred action lose the privilege if they leave the country.

Again, Plummer appealed to Gillibrand; again, the senator came through. On April 23, USCIS granted Levy permission to return to the United States. She flew to Israel on May 1.

Just prior to her flight, Levy told JTA that she was grateful for Gillibrand’s “wonderful” assistance and hoped to return in three months — her permitted time abroad — to a more welcoming United States.

“The future after these months is not cloudless,” she said. “I hope that the U.S. by the summer will be a country with a different atmosphere.”

Levy’s hopes rest on the Leahy bill and parallel efforts that could end the bureaucratic tangles resulting from the federal government’s refusal to recognize gay marriages performed in the growing number of states that allow them.

In March, the U.S. Supreme Court held a hearing on a petition that could result in the overturning of the Defense of Marriage Act, or DOMA, which since 2011 the Obama administration has refused to defend in court. During the hearing, a majority of the justices appeared ready to strike down the law.

Meanwhile, Democrats in Congress have legislation pending that would repeal DOMA should the court not strike it down. Its passage is unlikely, however, in the Republican-controlled U.S. House of Representatives, where a version of the Leahy bill introduced by Rep. Jerrold Nadler (D-N.Y.) also is under consideration.

“We must lift the hardship for LGBT families until the Supreme Court rules on the constitutionality of DOMA,” Gillibrand said. “Regardless of the court’s ultimate decision, it is well past time for Congress to recognize the marriages of all loving and committed couples and finally put the discriminatory DOMA policy into the dustbin of history.”

The Immigration Equality Action Fund leads a coalition of about a dozen advocacy groups seeking relief for what Plummer estimates is 36,000 binational LGBT couples in the United States. Among the groups is Bend the Arc, the Jewish liberal activist group that has been leading efforts in the Jewish community for family reunification rights for gays and lesbians.

Other Jewish groups, including the leading immigration rights group, the Hebrew Immigrant Aid Society, for years have advocated extending such rights to same-sex couples. Hadar Susskind, Bend the Arc’s Washington director, said its congressional lobbying is required because of resistance to Leahy’s proposed law by conservative groups — among them, Roman Catholics and Evangelical Christians — that otherwise support immigration reform.

“We felt it was critical to demonstrate that those folks may have that view, but it’s not unanimous within the faith community,” he said.

In the meantime, couples like Levy and Lavy will continue to face the perils of a complex immigrations bureaucracy.

“The last year was one of uncertainty for me and Adi,” Lavy said. “The uncertainty is still going on.”