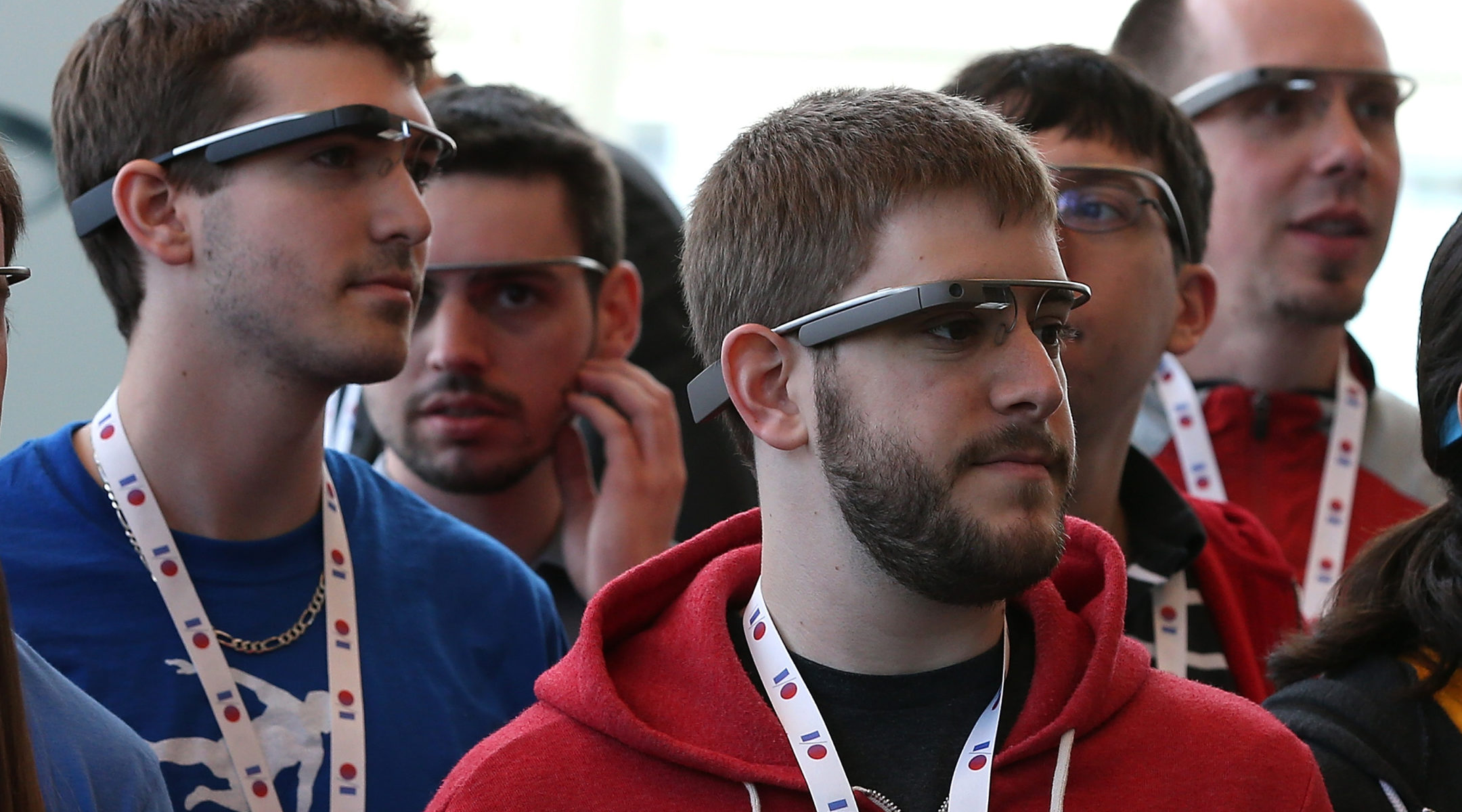 (JTA) — Over the past few weeks, strangers have begun stopping high school computer science teacher Chaim Cohen on the street. A few accuse him of recording them without their knowledge. Even fewer blame him for all of society’s ills.

But many just want an answer to a simple question: Is he wearing Google Glass?

Cohen is among the approximately 2,000 developers throughout the United States who are trying out the search giant’s much-hyped wearable computer, a futuristic Internet-connected gadget that users wear like a pair of glasses and enables them to stream information from the Web directly into their field of vision.

“I offer to let them try it on,” Cohen said. “My goal is to advocate for this and show people that this is not a bad thing. It’s a good thing.”

Well before Google Glass is expected to be publicly available sometime in 2014, the device already is generating controversy. Critics worry that users will be able to surreptitiously take photographs with an app that permits wearers to snap pictures just by winking. Some bars and casinos, citing privacy concerns, have preemptively banned the device. In West Virginia, legislators have tried to make it illegal to wear Glass while driving.

But none of this concerns Barry Schwartz, CEO of the Web development firm RustyBrick, who can hardly wait to get his hands on it. Schwartz is one of the 8,000 “explorers” chosen by Google to receive the device for $1,500 apiece.

“We would be programming Jewish-related apps to help Jewish people use the technology to live their Jewish lives,” said Schwartz, whose company has already developed popular Jewish applications for smartphones, like a digital prayer book and Hebrew translator.

Schwartz’s vision of a Glass-enabled Jewish life sounds incredibly futuristic. Notifications flash when it’s time to pray. Nearby synagogues or kosher restaurants are instantly located. Important Jewish dates such as yahrtzeits and holidays are never forgotten.

Recently, a Chabad rabbi at Stanford University set up a Google Glass tefillin stand. Men who chose to don the ritual leather straps then put on Glass and the blessing flashed before their eyes.

Google Glass, which is generating controversy even before hitting the market in 2014, is being seen as a powerful technology for Jewish applications. (Google)

“Let’s say you want to buy an etrog,” he said. “You can create a Google Hangout and have a rabbi look at the etrog as you are looking at it. The rabbi can ask you to turn it to the right and turn it to the left, and can give you an opinion about it right away.”

Mike Vidikan of the Washington, D.C.-based organization Innovaro, which provides insights about how new technologies will shape the future business environment, expects that Glass also could significantly change how consumers shop for kosher food.

“As they start inspecting a particular group of foods,” he explained, “notifications could pop up with information about the kosher certifications, as well as reviews, and who in their social networks recommend it.”

In education, where information technology already is transforming the classroom experience, Glass could be yet another game-changer. Hebrew school classes could tour Israel virtually, seeing the country though the eyes of a guide equipped with the device. Students in various locations could participate in classes together, following text as seen through the eyes of a teacher.

Cohen, who teaches at a public school in central New Jersey, plans to develop an application that will help him learn his students’ names.

“I don’t remember all the names of my students during the first weeks of school,” he said. “I want to be able to look at them and have their names overlapped on top.”

Despite the enthusiasm, tech experts from Jewish day schools are skeptical. Price is one factor. At $1,500, Glass is significantly more expensive than an iPad or similar devices.

Educators also are understandably uneasy about a device that can snap pictures, literally, with the wink of an eye. Others point out that since Glass’ apps are still being developed, its educational value remains to be seen.

“In a traditional classroom, I don’t see where wearing the computer on my face is an enormous quantum leap in ease of use, efficiency and productivity over traditional computer modalities,” said Seth Dimbert, director of educational technology at the Scheck Hillel Community School in North Miami Beach, Fla.

“It’s actually less useful if only I can see a computer screen. Classrooms are about collaboration with the people around you and making screens bigger and more portable, so more people can gather around them at once.”

“Teenagers are freaked out by Google Glass,” he said. “Who would want to have these glasses on all the time? It’s scary.”

Ultimately, however, many believe that it’s just a matter of time before Glass becomes more widely accepted. Many technologies now considered indispensable were greeted initially with skepticism.

“If people adopt it at the rate that they adopted smartphones,” Schwartz predicts, “then it will have a huge impact on Jewish life.”