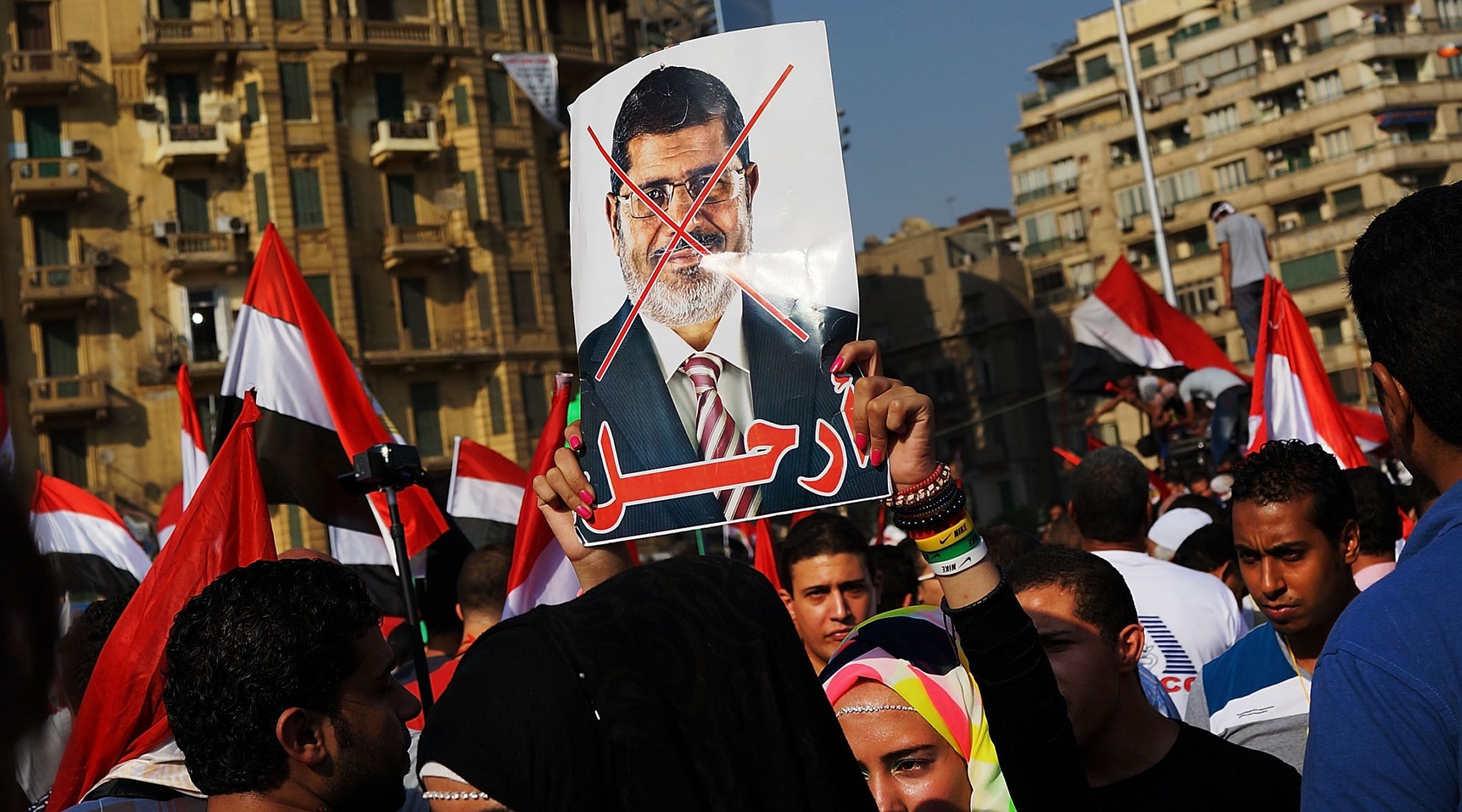 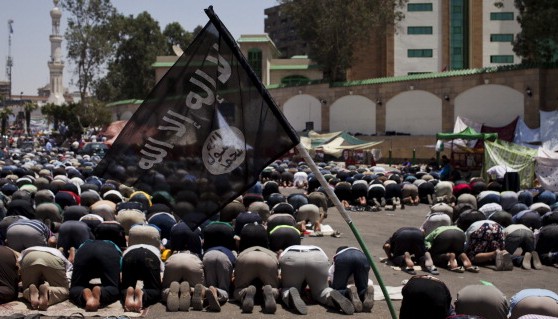 A black flag associated with Salafist Islamist movement flies in Cairo in front of supporters of former Egyptian President Mohammed Morsi during prayers the day after he was ousted from power, July 4, 2013 in Cairo, Egypt. (Photo by Ed Giles/Getty Images)

Adli Mansour, chief justice of Egypt’s Supreme Constitutional Court, was sworn in Thursday as Egypt’s interim president less than a day after Morsi was deposed by the country’s military in a near-bloodless coup. Morsi, the country’s first democratically elected president, reportedly is being held by the military under house arrest. Mansour will serve in the position until new elections are held.

Israeli Prime Minister Benjamin Netanyahu ordered his cabinet ministers not to give interviews or offer any public opinions about the current situation in Egypt, Haaretz reported Thursday. Still, according to Israeli media, the Israeli government is following the events in its neighbor to the south carefully.

Former Israel Defense Forces Chief of Staff Gabi Ashkenazi told the Jerusalem Post on Thursday that the toppling of Morsi’s presidency does not place Israel in immediate danger, since the Egyptian army is currently too busy with domestic issues.

“Even in the year the Muslim Brotherhood was in power, they did not renege on the (1979 Israeli-Egyptian) peace treaty, and as far as stopping smuggling (from Sinai into the Gaza Strip) and handling Hamas, they were reasonable,” he told the newspaper.

But there could be a risk that Islamic militants would take advantage of a decreased Egyptian military presence in the Sinai Peninsula in order to attack Israel, he said, according to the Post.

Labor lawmaker Benjamin Ben-Eliezer, in an interview with the Israeli daily Haaretz, praised the deposing of Morsi and warned that democracy would not last much longer in Egypt.

“The shake-up in Egypt will continue no matter who is elected, until Egypt returns to its secular base. It’s not just the Muslim Brotherhood in Egypt that’s the problem, but the entire (Islamist) movement – that hoped to take over the regime after 85 years.”

“Interim President Adli Mansour is a man of the old regime, and I assume he will work quickly to abolish the constitution and bring about new elections,” he also told Haaretz.

Meanwhile, Palestinian Authority President Mahmoud Abbas praised the ouster of Morsi and the Muslim Brotherhood, Haaretz reported, while top PLO official Yasser Abed Rabbo said: “This is a historic day for Egypt, and we are learning a lesson from the Egyptian example. Hamas should take note of what popular will can achieve.”

Several hours after the expiration of a 48-hour ultimatum by the military ordering Morsi to respond to the demands of tens of thousands of protesters who have taken to the streets in recent weeks, Defense Minister Abdul Fattah Al-Sisi said Wednesday evening that the army had fulfilled its “historic responsibility” and ousted the president.

In an announcement on state television, the military said it was not taking power for itself, but only ensuring that “confidence and stability are secured for the people,” The New York Times reported.

According to the Times, Al-Sisi outlined a plan for the post-Morsi era that would include the temporary suspension of the constitution and the appointment of the Supreme Constitutional Court to manage affairs of state until a new presidential election is held.