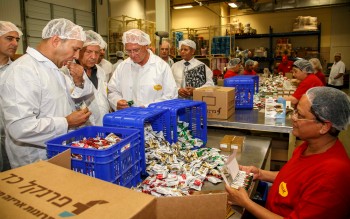 THE HAGUE, Netherlands (JTA) — The intensity with which Israel reacted this week to new European guidelines prohibiting support for projects based in disputed territories surprised not only EU diplomats, but also their Israeli counterparts.

The guidelines, which preclude already nonexistent EU grants to Israeli entities in the West Bank, Gaza Strip, Golan Heights and eastern Jerusalem, prompted Israeli Prime Minister Benjamin Netanyahu to convene an emergency meeting and release a sardonic statement telling Europe to butt out and go deal with Syria or Iran.

“The European Union and its important members have been very careful not to invest or incentivize what they regard as Israeli settlements,” a senior Israel diplomat told JTA. “Territorial clauses exist in virtually all contracts between Israel and the union.”

The diplomat added, “This whole thing is much ado about nothing. I don’t know why they are making so much noise about it in Jerusalem.”

The Israeli outburst over the relatively marginal issue of grants is even more inexplicable considering the silence with which Netanyahu’s office has greeted similar and seemingly more consequential EU resolutions.

Netanyahu issued no response to the EU’s recent move to label goods produced in Israeli settlements. Nor did he react to the statement by EU foreign ministers in December saying that agreements with the union don’t apply to territories Israel has controlled since 1967.

Those with inside knowledge of Israel-EU negotiations on this issue offer varying explanations for the apparent inconsistency, including an aggressive attempt at damage control and Israel’s supposed interest in escalating a crisis with Europe to diminish its influence on U.S. Secretary of State John Kerry’s peace drive.

But whatever Netanyahu’s reasons, a knee-jerk reaction to a surprise announcement likely isn’t among them, despite claims to the contrary in the Israeli media.

The four-page guidelines, a copy of which was obtained by JTA, were sent July 5 by the European Commission’s Middle East diplomacy chief, Christian Berger, to Israel’s mission to the European Union. According to a senior diplomat serving in Europe, they were urgently transmitted to the Ministry of Foreign Affairs and from there to the Prime Minister’s Office. Berger’s letter suggests that Israeli officials knew about them as early as May 31.

The text, which applies to “grants, prizes and financial instruments funded by the EU,” restricts the support to “Israeli entities having their place of establishment within Israel’s pre-1967 borders.”

Their aim is to “ensure the respect of EU positions and commitments in conformity with international law on the non-recognition by the EU of Israel’s sovereignty over the territories occupied by Israel since June 1967,” the document says.

The European Commission, the EU’s executive arm, is scheduled to send the guidelines on Friday to its various departments for implementation starting in 2014. They apply only to EU bodies, not individual member states.

Sandra de Waele, deputy head of mission at the EU embassy to Israel, was baffled by the Israeli reaction. In an interview with the Times of Israel, she confirmed that Israel had known about the document ahead of its release.

“If people knew what it was really about, they would be much less upset,” she said.

When the document reached Jerusalem, it may have raised more questions than it answered, according to Oded Eran, a former Israeli ambassador to the EU and now a senior researcher at Tel Aviv University’s Institute for National Security Studies. The document’s ambiguity, he said, is key to understand Jerusalem’s worry.

A severe interpretation could lead to withholding EU funds from institutions within the pre-1967 borders if they employ settlers, Eran said. A mild interpretation would merely formalize the existing situation in which EU institutions carefully steer clear of projects based in or directly connected to Israeli activity in disputed territories.

“The truth is no one knows what these guidelines will mean on the ground because no one knows precisely to what degree they will be carried out and interpreted,” Eran said. “It could end up being harmless or cost hundreds of millions of euros in grants, or something in between.”

Netanyahu’s attempts to sound the alarm may be a move to push the European Union in the milder direction. But other observers connect the storm to Kerry’s upcoming visit to Israel, the sixth in a series of thus-far unsuccessful attempts to get the Palestinians to return to negotiations and persuade Israel to facilitate the effort with goodwill gestures.

“Over the past weeks, European leaders increasingly pitched in Kerry’s drive,” a pro-Israel lobbyist from Brussels told JTA on condition of anonymity. “But the U.S. and the European Union have different attitudes. The Europeans believe Israel should come under greater pressure and have moved to apply it. It may be that Israel is taking the opportunity to escalate the guidelines into a full-fledged yet temporary crisis to block the European involvement.”

The connection between Kerry’s initiative and the guidelines was made as well by European Jewish Congress President Moshe Kantor, who met with Netanyahu on June 28, the day the new guidelines were adopted.

“On the eve of another visit to the region by U.S. Secretary of State John Kerry in the hope of restarting negotiations,” Kantor said Tuesday, “some in the EU have decided that now is a good time to throw a spanner in the works and inflame tensions between the parties.”