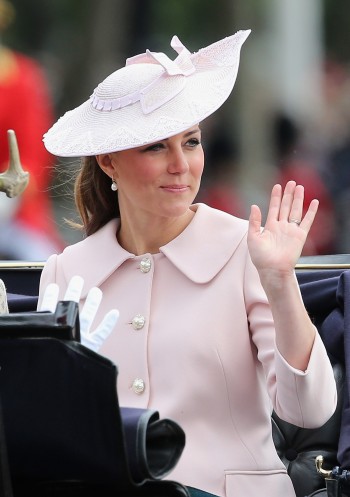 Kate, the duchess of Cambridge, shown riding in a carriage back to Buckingham Palace in London in June 2013, is in labor in a hospital wing of St. Mary’s Hospital named for a wealthy Jewish man. ( Chris Jackson/Getty)

When the duchess of Cambridge, Kate Middleton was rushed to the Lindo Wing at St. Mary’s Hospital early Monday, anxious to avoid hundreds of paparazzi camping outside, she almost certainly missed the little plaque at the entrance. The memorial pays tribute to the anonymous donor “who was not unmindful of his neighbors’ needs” and who paid for the wing in 1937.

In fact he wasn’t so anonymous: the wing is named after him. Frank Charles Lindo was a wealthy Jew, descended on his mother Adeline’s side from the Heilbut family, and on his father Charles’s side, it appears, from one of London’s most famous Sephardi families. While it is not clear exactly how he is related, the Lindo name is particularly associated with the silver Lindo Lamp, the earliest known English menorah, which was commissioned in 1709 on the marriage of Elias Lindo to Rachel Lopes Ferreira.

Born in 1872, Frank Lindo married Violet Portman, a member of a British aristocratic family and a member of the board of management at St Mary’s. When Lindo died in 1938, he had donated £111,500 to the hospital, including £5,000 on the morning of the opening of the Lindo Wing so that it could open free of debt. While nowadays considered state-of-the-art, at the time it was meant for  “patients of moderate means” who could not afford private care but were too well off to be treated in a charity hospital for the “deserving poor”. In his will, Lindo left his house at Aldeburgh to the hospital as a convalescent home for the nursing staff, with an endowment fund of £25,000 for its maintenance.

“His gifts, sympathy and understanding made possible the erection and equipment of this building for the relief of sickness and suffering,” says the memorial plaque, “and will remain for all time a monument of his outstanding generosity.”

Surely he would have shepped much nachas from the royal baby born in the birthing suite he funded.