The Mahindra Reva, an electric car from India that can be charged using home outlets, is part of the electric car plan in Israel. (Mahindra Facebook)
Advertisement

TEL AVIV (JTA) — It was perhaps the biggest startup failure in Israel’s history.

Five years of bombastic hype. $850 million of funding burned. Networks planned in at least seven countries. A founder who spoke of changing the world.

When the electric car company Better Place declared bankruptcy in May, it marked an unhappy, though perhaps unsurprising setback for those who dreamed of Israel revolutionizing the global auto industry and freeing drivers from the tyranny of volatile oil prices.

After so public a downfall, it was reasonable to wonder if and when Israel’s electric car industry would rise again.

Two initiatives are now trying to salvage the remains of Better Place and keep battery-powered rubber on Israel’s roads.

Last week, the solar energy entrepreneur Yosef Abramowitz, in partnership with the Association for the Advancement of Electric Transport in Israel, won a bid to buy Better Place’s Israeli infrastructure and intellectual property for about $11 million. Abramowitz will be the new president of Better Place and Efi Shahak, AAETI’s chairman, will serve as board chairman.

The Mahindra Reva, an Indian electric car that can be charged using home outlets, may be available for sale in Israel before the end of the year. (Mahindra Facebook)

Meanwhile, Electric Vehicle Environments — known by the acronym EVEN — plans to import electric cars and motorcycles to Israel that will be able to use the 2,000 Better Place charging posts already installed around the country. Rather than the single model offered by Better Place, EVEN will offer seven cars ranging from the luxury American vehicles made by Tesla to the Indian compact Mahindra Reva.

“The issues that exist in the States don’t exist here,” said Marc Harel, who manages EVEN in Israel. “Vehicles aren’t going more than 125 miles. The one place you might go, Eilat, we can put a charging station in the middle.”

With its innovative solutions to problems that had long confronted electric car makers, Better Place, led by its exuberant and self-promoting CEO Shai Agassi, had raised hopes that a viable alternative to fossil fuel-powered transportation was within reach. But despite its high-profile flop, entrepreneurs continue to put money behind their faith that a small country like Israel is an ideal market for electric cars.

Abramowitz hopes to transform Better Place from a large car retailer to a slim infrastructure operation managing the charging posts and the company’s battery swap stations, where drivers can exchange a spent battery for a fresh one in about the time it takes to fill a gas tank.

The company will be run more like a startup, with 50 employees instead of the 300 it had before the bankruptcy. The slimmed-down operation will operate 15 swap stations, down from 30, and have a budget of just $12 million per year. 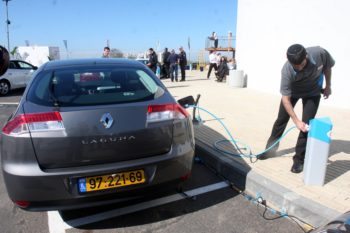 Better Place “tried to conquer the whole world,” Abramowitz said. “We’re not doing it that way. We’ll serve the Israeli market and grow it organically.”

Both companies have a long way to go, and a lot of skepticism to overcome, to prove that electric cars have a bright future in Israel. Among those obstacles are government regulations that could mean the difference between success and failure for both ventures.

Harel hopes to begin importing Teslas at the end of this year, and to start selling Mahindra Revas in Israel a few months later. But in order to import the cars, he’ll have to pay a $2.5 million deposit to the government.

“In Israel it’s one obstacle after another,” Harel said. “This is an extremely challenging market to deal with. The Transit Ministry has put a lot of barriers to entry.”

Abramowitz, meanwhile, will have to prove that investing in a network that failed two months ago isn’t just throwing good money after bad. He is still trying to raise the money to buy Better Place, and said 5,000 electric cars will have to be on the road within two years for the company to break even. Better Place sold only about 1,000 cars.

Harel and Abramowitz are lobbying to extend a tax benefit, due to expire at the end of the year, that offers electric car importers a vastly lower rate than their gas-fueled competitors. Currently, importers of electric cars pay an 8 percent tax, while gas cars pay 83 percent.

Abramowitz also hopes to convince the government to adopt Better Place’s network as a national infrastructure project, a designation that would provide a range of benefits to help the industry develop, including loan guarantees and a more favorable regulatory environment. Abramowitz and Shahak also want the government to populate its car fleet with electric vehicles and give electric car drivers benefits like free parking.

The government has not agreed to these proposals, telling JTA that the relevant ministries will wait to see what happens before taking a position. But even if they do, skeptics remain unconvinced that either company has hit on the appropriate model.

Haaretz automotive columnist Yoav Kaveh, while conceding that electric cars eventually will be the norm, said the jury is still out on how best to keep the batteries charged.

“We need to see if it’s going to be battery switching, a fuel cell or a smaller battery,” he told JTA.

Harel says Mahindra Reva and Zero Motorcycles, a model that can plug into a regular home outlet, solve Kaveh’s problem. And even though another charging method might offer some benefits, the Better Place network has the advantage of already existing.

“This is a national program that could make Israel a leader in electric cars,” Shahak said. “We should take this infrastructure and keep it running. It would be a shame to throw it away.”