Jewish newcomers bring optimism, but can they revive small towns in the South? 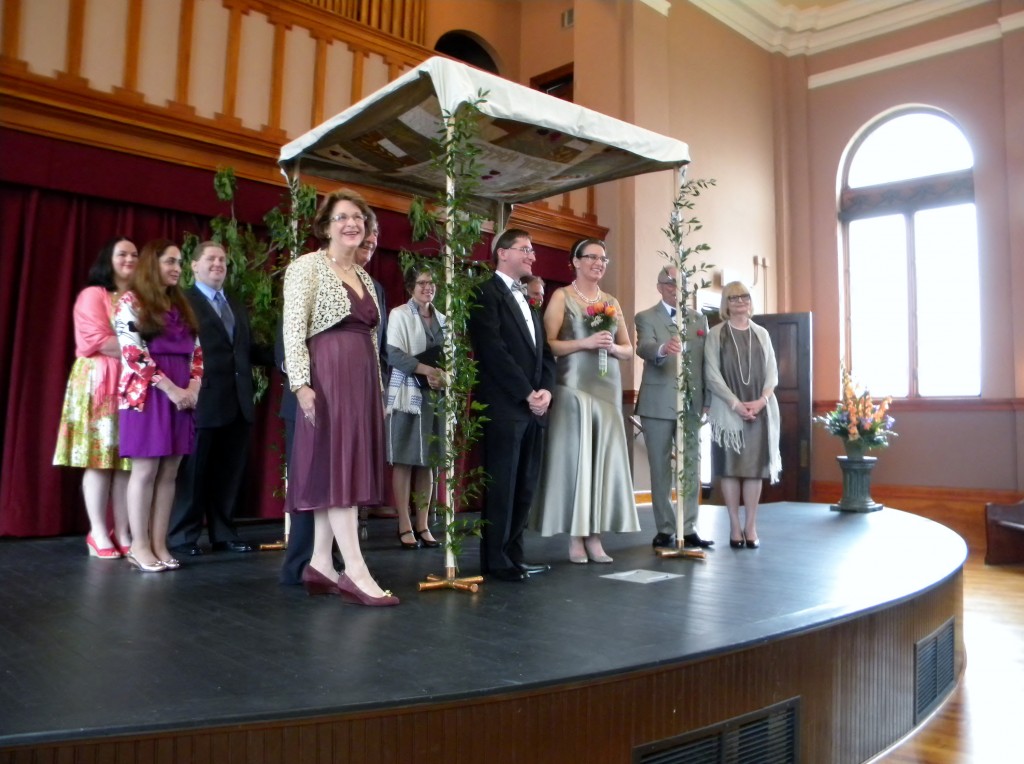 (JTA) — Standing beneath the chuppah during his wedding in May, Doug Friedlander said he felt a “magical moment,” and it wasn’t just because of his blushing bride.

Theirs was the first Jewish wedding in Helena, Ark., in more than 20 years.

An ailing Mississippi River town of 12,000, Helena once was home to a Jewish community of 150 families. Today, fewer than a dozen Jews remain, most of them 85 or older.

By 2006, the community could no longer support a synagogue, and Temple Beth El was turned over to the state, which remade it as a community center. Friedlander rented the facility for his wedding, which still has a Star of David on the glass dome above the former sanctuary and Hebrew passages inscribed in the doorways.

“I had a feeling it was the end of young people getting married here,” said Mary Lou Kahn, whose daughter Caroline was the last person to be married in the synagogue, in 1989. “It was great that the attendance was so large that many people could see what became of our beautiful temple.”

Helena’s story is a familiar one in the South, where many once-thriving, small-town Jewish communities have all but disappeared, their young people drawn away to better opportunities in bigger cities.

But Friedlander’s recent wedding — indeed, his very presence — is among a number of signs of new Jewish life in the South, which, while perhaps not enough to reverse long-term demographic trends, has injected a dose of optimism into towns accustomed to a narrative of decline.

“We understand one family can truly make a difference for the world and certainly for these small towns,” said Rabbi Marshal Klaven, director of rabbinic services at the Institute of Southern Jewish Life, which provides resources to small Jewish communities in the region. “If they participate in some sort of communal Jewish existence, then Judaism is still alive.”

In 2010, Klaven was asked to lead a holiday service by members of the Upper Cumberland Jewish Community, a small havurah of fewer than 20 people in Crossville, Tenn., a city of about 11,000 people east of Nashville. When Klaven showed up, he was surprised to find 70 people there.

The community now holds Friday night services every other week for about 20 people; up to 75 may show up for holidays services, according to Nort Goodman, the community president. An interfaith Passover seder earlier this year drew about 150.

“We don’t have a real synagogue and we don’t have a rabbi,” Goodman said. “There are probably more Jews than we know of. But for the ones who do it, it’s a way to cling to their faith and socialize with other Jews.”

In Dothan, Ala., a program that provides $50,000 grants to young families or retirees willing to stay for three years has attracted six takers since 2008. The program, which drew national headlines when it was first launched, has helped reverse the fortunes of Temple Emanu-El, which by 2008 was down to 50 families from 110 in the 1970s.

Jewish life in the South has been helped along by a trickle of young, college-educated newcomers drawn to the area by the small-town vibe and the opportunity to do the kind of meaningful work that’s much harder to find in a big city.

One of them is Matty Bengloff, who grew up in Manhattan, came to the South six years ago, and now owns a frozen yogurt shop in Cleveland, Miss., with his fiancée.

Bengloff attends a monthly Shabbat service at the small city’s Temple Adath Israel led by Harry Danziger, a Reform rabbi from Memphis. The synagogue has only about 20 members left, but the monthly gatherings draws about a dozen non-Jews, intrigued by the service and eager to support their Jewish neighbors.

“It’s a little bit more laid back,” Bengloff said. “I definitely enjoy everyone knowing each other here.”

The monthly services include Torah readings, a sermon and a potluck dinner. Danziger said the community’s commitment to Jewish life, including three bat mitzvahs in recent years, is cause for optimism in the South.

“It really flies in the face of a stereotype that Jews from the South are excluded or outsiders,” he said. “There’s a great sense that Jews are part of the community.”

It’s hard to imagine that even these bright spots can reverse the long decline of Jewish life in small towns in the South. Even in Helena, which has managed to continue holding prayer services in a private home after giving up the synagogue, it’s unlikely the arrival of a young newcomer is going to restore the community to anything like what existed decades ago.

“I’d like to get more young Jewish people here, but there’s nothing for them to do,” said David Solomon, the 97-year-old patriarch of Helena’s Jewish community. “Until the economy grows, we’re not going to get the population back.”

Debra Kassoff is a Reform rabbi who traveled regularly to Helena as part of the Institute for Southern Jewish Life from 2003 to 2006 and officiated at Friedlander’s wedding. She now works as a part-time rabbi at a Reform synagogue in Greenville, Miss., a 133-year-old congregation with fewer than 50 members.

“When folks from my congregation start bemoaning there aren’t any Jews left, I’m amazed they’re still looking for people to join the congregation because I don’t think that’s terribly realistic,” Kassoff said. “I remind them what a great congregation they’re a part of. And there’s value in that — in the same way people who work with geriatric populations and individuals can find meaning, even though they’re working with people nearing the end.”

A New York native, Friedlander came to Helena in 2004 as a science teacher with Teach For America, the New York-based nonprofit that sends young graduates to teach in low-income communities across the country. Today, he heads the county’s chamber of commerce, where he is focused on bringing new business and opportunities to Helena, which he believes is ready for its Cinderella moment.

“For me,” Friedlander said, “it’s a place ready to be picked up, dusted off and taken to the ball.”