Victims of sex trafficking say they don't choose the life and cannot extricate themselves from it. (Shutterstock)
Advertisement

“Sarah” became involved with a man 10 years her elder. He began setting her up with his friends for sex. She knew they would sometimes pay him, but she always thought she could trust him. He became her world.

Even though he would beat her, Sarah internalized it as affection. When she tried to leave, threats to her family kept her coming back.

“I didn’t realize I was a sex-trafficking victim until I got out,” said Sarah, who grew up in an Orthodox Jewish home and described her experiences at an April conference on sex trafficking sponsored by UJA-Federation of New York.

“I thought he cared about me,” Sarah told JTA. “I started distancing myself from my family and he was the only support I had.”

While Sarah’s is not a typical story for an American Jewish girl, neither is it unique.

Though exact figures on Jewish girls involved in sex trafficking are unknown, the overall problem is a major one. Some 21 million to 27 million people around the world are involved human trafficking, either as sex workers or forced laborers — an epidemic President Obama has described as modern-day slavery. The U.S. State Department estimates that worldwide trafficking is a $32 billion industry.

Though not an issue that particularly effects Jews, Jewish federations and national organizations have pushed in recent years to bring the scope of the problem to public attention while providing aid and services to its victims.

“It’s a problem in the Jewish community and a problem people don’t want to acknowledge and a problem in society as a whole,” said Nancy Kaufman, CEO of the National Council on Jewish Women, which is developing a strategy to address sex trafficking. “It’s an issue that has not gone away and gotten worse.”

Last year, the Greater Miami Jewish Federation’s community relations council formed a task force on human trafficking. The year before, New Jersey’s Jewish Federation of Greater MetroWest launched a coalition to combat trafficking. And in April, the UJA-Federation conference attracted 450 educators and communal professionals from around the world.

Ahead of the 2014 Super Bowl, scheduled for Feb. 2 at MetLife Stadium in the New Jersey Meadowlands, the MetroWest federation’s community relations council is planning to deliver 10,000 bars of soap imprinted with the National Human Trafficking Hotline number to area hotels. Sporting events are considered major venues for traffickers.

“We believe our main role is to help raise awareness, decrease demand and make sure the right regulations are in place,” said the council’s director, Melanie Roth Gorelick. 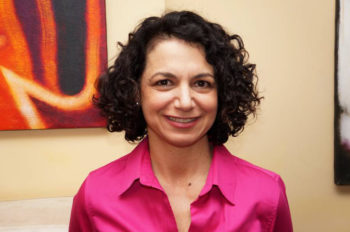 In the late 19th and early 20th centuries, it was common for newly arrived Eastern European Jewish women to be shuttled away into the sex trade, according to Lori Cohen, senior staff attorney for the New York nonprofit Sanctuary for Families and the chair of the April conference. Young, impoverished Jewish women from the shtetls were easy prey for unscrupulous pimps who promised better lives.

“Families were handing their daughters to these pimps who knew how to exploit values in the Jewish community,” Cohen said.

As American Jews climbed the economic ladder, the issue became less pressing, though by no means did it disappear. Still, many involved in combating sex trafficking, in the United States and Israel, say the Jewish community still regards it as someone else’s problem.

“When we started, 90 percent of Israelis didn’t know there was a trafficking problem in Israel,” said Rabbi Levi Lauer, executive director of ATZUM-Justice Works, an Israeli organization dedicated to eliminating trafficking. “There was a general consensus that because these weren’t Jewish women, this wasn’t an important matter.”

That appears to be changing. According to a June report from the U.S. State Department, Israel is in the top tier of countries fighting trafficking. Israel previously had been listed in the lowest tier.

In the United States, the Jewish community also has become more serious about helping the victims of trafficking. In 2009, the Brooklyn-based Jewish Child Care Association launched Gateways, a residential counseling program in Pleasantville, N.Y., for underage sex-trafficking victims. The program serves Jewish and non-Jewish victims like “Kimberly,” who came to Gateways after a prostitution call resulted in rape and abandonment on the street.

“A lot of people think we choose to be in the life, but we’re minors,” Kimberly said. “We cannot choose and cannot consent to sex.”

By age 14, Kimberly was giving her entire paycheck to her boyfriend, leaving her broke. After asking a coworker for a loan, she learned about somebody who would pay her for sex.

Now 20, Kimberly has completed the Gateways program and earned a cosmetology license. She now works with another New York counseling organization to help girls escape the life she left behind.

Rabbi Julie Schonfeld, executive vice president of the Conservative movement’s Rabbinical Assembly, has made it a priority to help girls like Kimberly. Schonfeld is a member of President Obama’s Advisory Council on Faith-Based and Neighborhood Partnerships, which he charged last year with addressing trafficking.

Schonfeld’s group is pushing to turn its 1,700 members into advocates for victims. A conference call with Rabbinical Assembly members this week will focus on modern-day slavery and encourage rabbis to speak about the issue during their High Holiday sermons.

“Part of what we really need is for all Americans to have their eyes and ears and recognize what are the signs of slavery, not only for sex but also for labor,” Schonfeld said.

The signs are not always easy to spot and often are overlooked or explained away. In Sarah’s case, her family wrote off abnormal behavior as typical of an angry teenager. Her pediatrician thought she was just falling in with a bad crowd. She would show up at school extremely tired, dropped many of her friends and often would disappear from home, returning with unexplained injuries.

“There has to be a realization that anybody can be trafficked,” Sarah said. “The Jewish community has to be open to people who’ve had this experience.”