Jewish groups back Obama on Syria, but downplay Israel angle 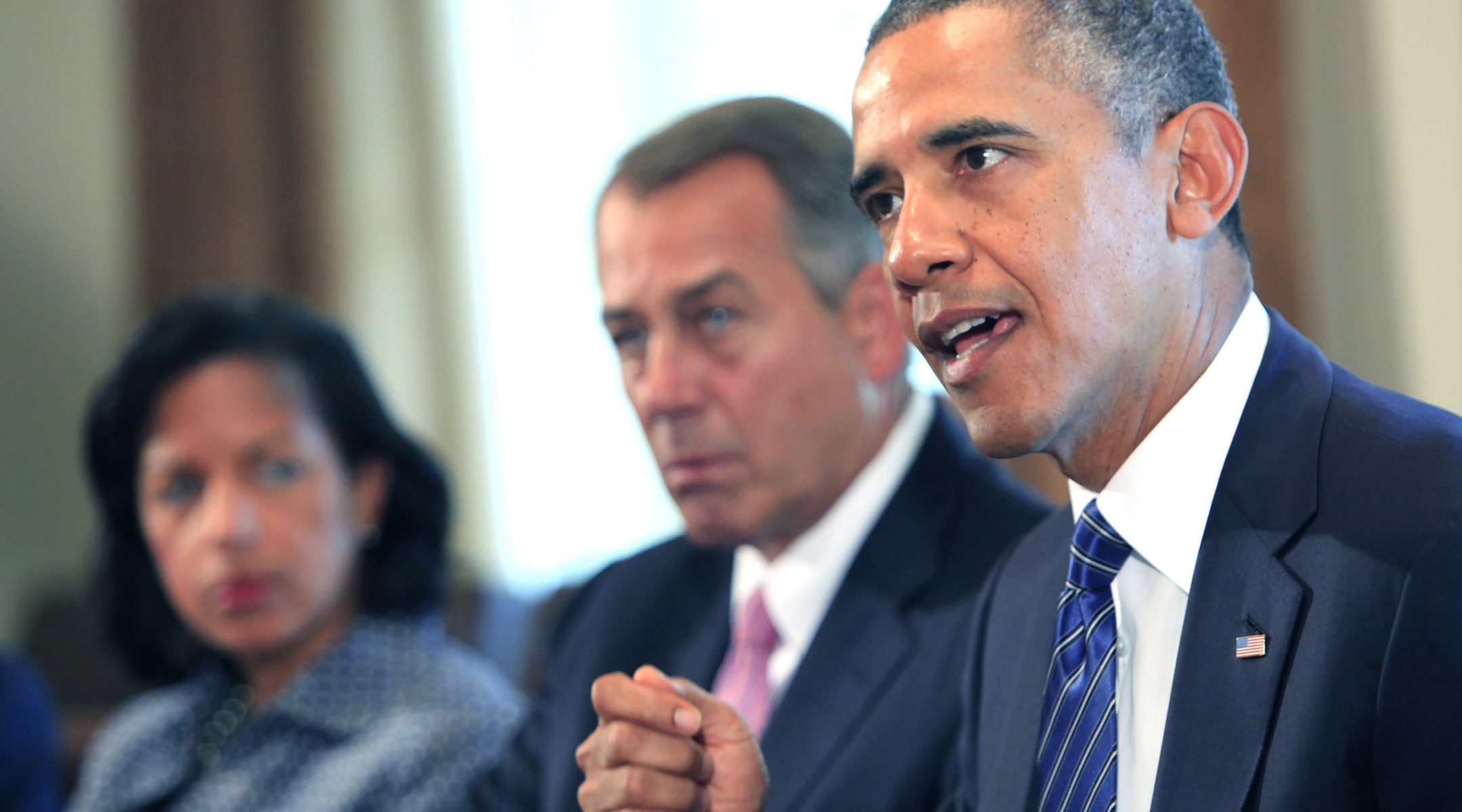 President Obama speaking at the White House with members of Congress about the situation in Syria, Sept. 3, 2013. (Photo by Dennis Brack/Getty Images/JTA)
Advertisement 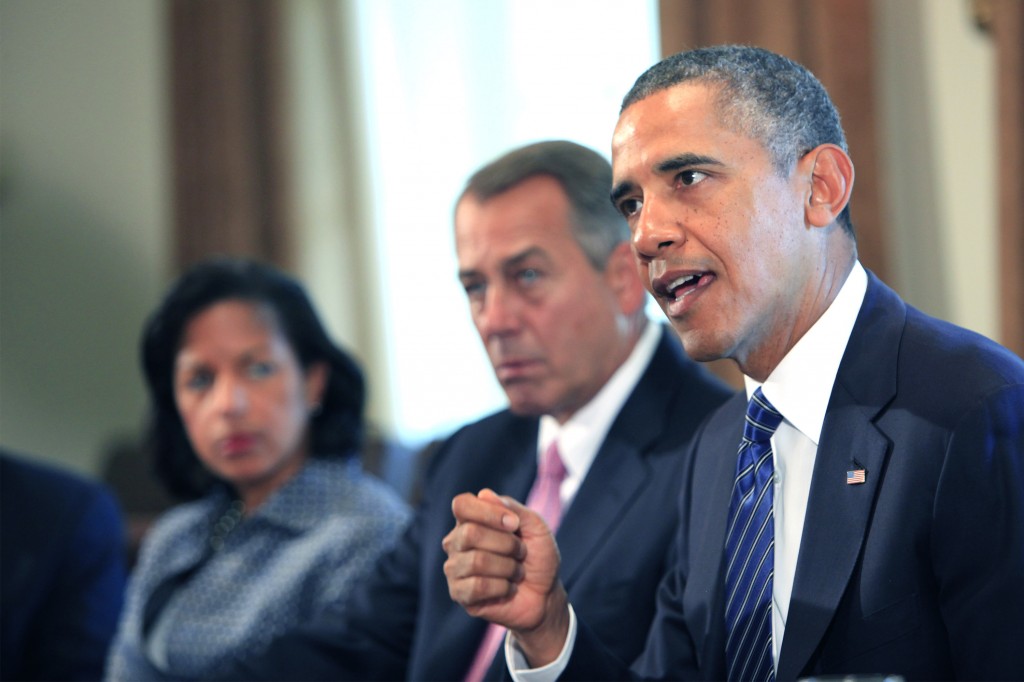 President Obama speaking at the White House with members of Congress about the situation in Syria, Sept. 3, 2013. (Photo by Dennis Brack/Getty Images/JTA)

A lingering sensitivity over misrepresentations of the role of the pro-Israel community in the lead-up to the Iraq War in 2003 kept Jewish groups from weighing in on Syria until it was clear that President Obama was determined to strike. Now that same sensitivity is leading them to downplay any mention of Israel.

Officials of the Conference of Presidents of Major American Jewish Organizations, finishing up a conference call Tuesday afternoon with top security advisers to Obama, waited until the White House staffers were off the call before urging constituent organizations not to make their statements “Israel-centric.”

Notably, Israel was not mentioned in any of the three statements that emerged immediately following the conference call, which was convened to solidify support for Obama’s call for a strike. The statements — from the American Israel Public Affairs Committee and the Anti-Defamation League as well as the Presidents Conference — only alluded to Israel.

“America’s allies and adversaries are closely watching the outcome of this momentous vote,” the AIPAC statement said. “This critical decision comes at a time when Iran is racing toward obtaining nuclear capability. Failure to approve this resolution would weaken our country’s credibility to prevent the use and proliferation of unconventional weapons and thereby greatly endanger our country’s security and interests and those of our regional allies.”

The statements focused on the need to contain a nation that has crossed a red line by using chemical weapons against its citizens.

“Those who perpetuate such acts of wanton murder must know that they cannot do so with impunity,” the Presidents Conference statement said. “Those who possess or seek weapons of mass destruction, particularly Iran and Hezbollah, must see that there is accountability.”

Israel nonetheless loomed large in an off-the-record conference call between Jewish officials and two of Obama’s top national security advisers. One Jewish official asked whether the United States would assist militarily should Syria attack Israel. (The answer: Yes, but it is the U.S. assessment that Syrian President Bashar Assad is not that reckless.)

One of the White House officials repeatedly emphasized that acting to keep Syria from using chemical weapons was a critical step to keeping Iran from obtaining a nuclear weapon.

The vocal support of American Jews comes as Obama ramps up efforts to win congressional support for a military strike. On Tuesday, the president met with top congressional officials and repeated his appeal to support limited strikes on Syria to degrade its chemical weapons capability. Over the weekend, Obama said he would seek approval of Congress before ordering a strike.

“This is a limited, proportional step that will send a clear message not only to the Assad regime, but also to other countries that may be interested in testing some of these international norms, that there are consequences,” Obama said before the meeting.

Until Obama declared his readiness to strike Syria on Saturday, Jewish groups had been reluctant to weigh in — in part because of the hangover from unwarranted attacks blaming Jewish lobbying for the Iraq War. But in the wake of Obama’s declaration over the weekend, those fears seemed to evaporate.

“The president has made his decision and we’re not ahead of it,” Abraham Foxman, the ADL’s national director, told JTA. “He’s not doing this for Israel. This may have serious ramifications for Israel which are negative.”

U.S. administrations have traditionally sought Jewish support for foreign policy initiatives, but in this case, congressional insiders say the influence of AIPAC and other Jewish groups may be checked by the emergence of other foreign policy constituencies.

Since the 2010 midterms, the Tea Party caucus among Republicans, which has a prominent isolationist streak, has resisted AIPAC pressure to back a robust foreign assistance program. Among Democrats, the insiders said, progressives wary of another foreign war are likelier to heed anti-war voices than the pro-Israel lobby.

Rep. Alan Grayson (D-Fla.), who is Jewish and has been a pro-Israel and progressive stalwart, has been a leading voice of skepticism about a strike. Other Jewish lawmakers have robustly backed a strike, preeminent among them Rep. Eliot Engel (D-N.Y.), the top Democrat on the House Foreign Affairs Committee, and Rep. Debbie Wasserman Schultz (D-Fla.), the chairwoman of the Democratic National Committee and one of the highest profile Jewish lawmakers.

Wasserman Schultz invoked the Holocaust in making her case.

“As a Jew, the concept of ‘Never again’ has to mean something,” she told CNN over the weekend.

Some groups have been lobbying for weeks. An official in the office of Sen. Bill Nelson (D-Fla.) said the office has been flooded with calls and emails from Jewish federations and constituents urging the lawmaker to back Obama’s plan.

Cantor cited a key Israeli concern — that an Assad unscathed after using of weapons of mass destruction would embolden Iran — in explaining his support for the president.

“America has a compelling national security interest to prevent and respond to the use of weapons of mass destruction, especially by a terrorist state such as Syria, and to prevent further instability in a region of vital interest to the United States,” he said in a statement.

The government of Israeli Prime Minister Benjamin Netanyahu has remained silent on the Syria matter in part, its officials said, because it sees no good outcome.

Such a posture is markedly different from late 2005, when Israeli officials urged U.S. Jewish groups to talk President George W. Bush out of considering regime change in Syria. The Israelis argued that as bad as Assad’s government was, the alternatives were worse.