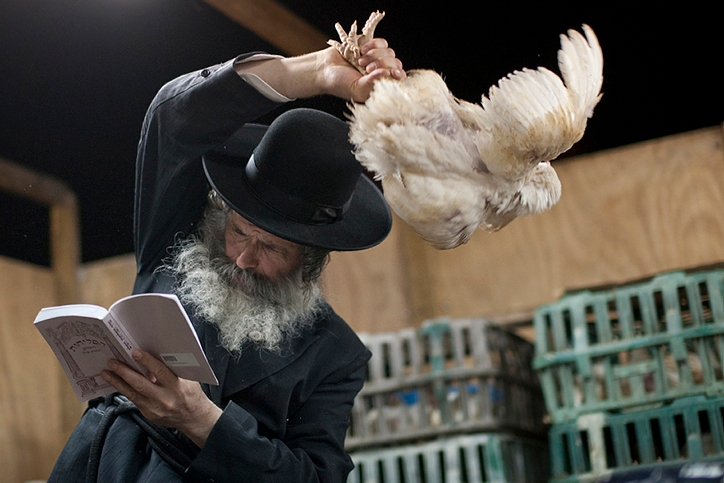 A haredi Orthodox man participates in the kapparot ritual in the Israeli city of Ashdod. (Dima Vazinovich/Flash90)
Advertisement

Brooklyn nurse Rina Deych has been waging a 20-year campaign to stop the use of chickens in the kapparot ritual. (Credit: Linda Obuchoska)

NEW YORK (JTA) — For years, Rina Deych was treated like she was crazy.

Fighting the Yom Kippur ritual of kapparot, she was told things had always been this way and if she kept up the battle, she would only incite anti-Semitism.

Year after year, people would kindly suggest she find another hobby. Cats, maybe.

But today, the Brooklyn nurse and animal rights activist believes the tide is finally turning.

“I’m not an optimist by nature,” Deych told JTA. “But I believe that I will live to see the day when chickens are no longer used for kapparot.”

Animal rights groups long have protested kapparot, an ancient ritual in which a chicken is swung over the head and then slaughtered in a symbolic transference of a person’s sins in advance of the Jewish Day of Atonement. The protests had little effect.

In recent years, however, a small but growing number of rabbis have spoken about against a ritual that continues to be practiced by tens of thousands of mostly Orthodox Jews around the world.

Last week, the recently elected Ashkenazi chief rabbi of Israel, David Lau, warned kapparot organizers that the failure to treat animals decently is a violation of religious law. And a number of other prominent rabbis have expressed concern that the ritual, in which chickens are hauled into dense urban centers by the truckload, makes it virtually impossible to adhere to the principle of “tzaar baalei chayim,” which prohibits inflicting suffering on animals.

“People are starting to think twice about the whole thing,” Deych said.

While many Jews perform kapparot with money or fish, some prefer the live chicken — the meat is donated to charity after slaughter. Many hasidic groups believe the slaughter is what delivers the necessary spiritual punch in advance of the day when tradition says one’s destiny in the year ahead is sealed.

“The main part of the service is handing the chicken to the slaughterer and watching the chicken being slaughtered,” Rabbi Shea Hecht, head of the Chabad-affiliated National Committee for the Furtherance of Jewish Education and the organizer of a major kapparot site in Brooklyn, said in a recent NPR interview. “Because that is where you have an emotional moment, where you say, ‘Oops, you know what? That could have been me.'”

Protestors demonstrate against the use of live chickens in the kapparot ritual in Brooklyn. (Linda Obuchoska)

Deych, 56, lives in the Orthodox Brooklyn enclave of Borough Park. In her three-story house she keeps a dog, two parrots, 14 cats (two of which are on dialysis), a sick kitten and a rotating cast of strays — all of which require approximately four to six hours of care a day.

“You have to be a little bit crazy to do this,” she admits, “but I do it for the same reasons I became a nurse. I can’t stand to see a living creature suffer without trying to help. I feel it’s my duty.”

So when Deych, who is not Orthodox, discovered 20 years ago that the custom of using chickens for kapparot was taking root in her neighborhood, she embarked on a crusade. She begun schlepping from one kapparot site to the next trying to convince organizers that the birds were suffering and that using money — a religiously approved alternative — was a better choice.

During her visits, she would come across crates crammed with chickens stacked on top of each other and left in the sun for days. In most cases, she says, there was no sign that the birds had been given food or water.

Deych would plead with managers to feed the birds and let them roam; sometimes they would oblige.

“Mostly they’d tell me it’s not tzaar baalei chaim because conditions were no worse from what the chickens were used to in the food industry,” she said.

Seeing that practitioners commonly swung the chickens by their wings, Deych would explain that broiler chickens, bred for their meat, had a particularly heavy body and weak wings and by swinging it that way they were tearing the bird’s tendons.

“Every year I’d see little kids tell their parents, ‘The bird is crying!,’ and the parents would say ‘No, it’s singing. It’s happy to help us,’ ” she recalled. “I’d come over and tell them the kid is right.”

Contradicting parents in front of their children did not make her popular, but it did earn her the title of “the crazy chicken lady.”

Despite her efforts, kapparot operations grew. Considering that a chicken costs  as little as a few dollars but reportedly can sell as a vehicle for atonement for up to $30, it’s not surprising.

Among the biggest kapparot sites in Brooklyn is the one in Crown Heights, near the Chabad world headquarters. In 2007, People for the Ethical Treatment of Animals sent a formal complaint to New York City’s Department of Health along with a video showing live chickens being thrown into garbage bags to suffocate along with the dead.

Rabbi Avi Shafran, director of public affairs for the haredi Orthodox Agudath Israel of America, acknowledged in 2009 that there had been “inexcusable” situations in which animals were not treated properly.

In 2007, Shafran’s group enlisted a group of rabbis to supervise the main kapparot centers and ensure that the ceremony confirms to both Jewish law and municipal regulations. But the problems persisted.

In 2012, the Los Angeles Jewish Journal reported that $50,000-$100,000 worth of chicken meat was found in dumpsters around the city. In Israel, Jerusalem authorities centralized kapparot in four supervised locations and closed down others after complaints from residents. And in Tel Aviv, residents petitioned the mayor to stop the ceremonies altogether after dead chickens were found in trash cans.

A haredi Orthodox man participates in the kapparot ritual in the Israeli city of Ashdod. (Dima Vazinovich/Flash90)

Together they helped form the Alliance To End Chickens As Kaporos, which holds yearly protests near kapparot sites in New York and Los Angeles.

The same year the alliance was formed, Rabbi Shlomo Aviner, the head of the Ateret Yerushalayim yeshiva in Israel, joined Israel’s largest animal rights organization in a campaign against the use of chickens for kapparot. By 2012, he was joined by other prominent Israeli rabbis, including Yuval Cherlow and the late Menachem Froman.

All of which has Deych hopeful that the practice is in its death throes.

“This year,” she said, “I’ve already had practitioners tell me you’re right, I’m not doing this anymore.”