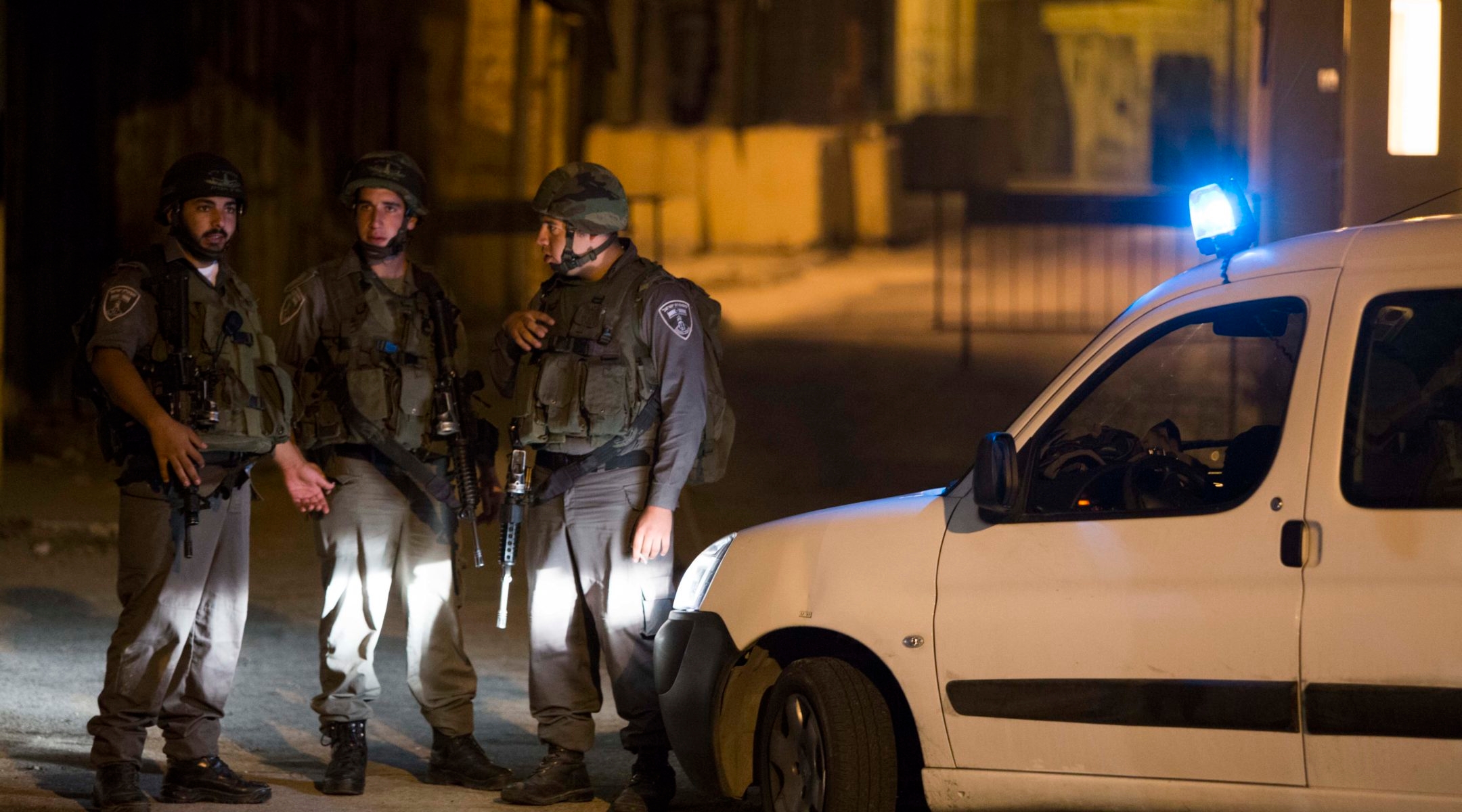 Israeli soldiers in Hebron stand near the scene where a fellow soldier was fatally shot by a sniper on Sept. 22, 2013. (Yonatan Sindel/Flash 90)
Advertisement

JERUSALEM (JTA) — An Israeli soldier was shot at a West Bank checkpoint in Hebron by a Palestinian sniper and died of his wounds, the Israeli army said.

The shots were fired Sunday near the Cave of the Patriarchs.  Hebron remained under a curfew.

The army evacuated some 11,000 visitors from Hebron who were participating in tours and programming for the intermediate days of Sukkot. Worshipers were ejected from the Cave of the Patriarchs following the shooting.

The soldier was hit in the neck by a bullet and rushed to a Jerusalem hospital, where he died. His name was not made public pending notification of his family.

Israeli troops and Palestinian residents of Hebron clashed following the shooting, according to the Times of Israel. Haaretz reported that the clashes began before the shooting.

In response to the shooting, Israeli Prime Minister Benjamin Netanyahu ordered the resettlement of the Machpelah House, a Jewish house near the Cave of the Patriarchs evacuated by the IDF last year. In a statement Monday, Netanyahu said that “those who try to uproot us from the City of the Patriarchs will achieve the opposite. We will continue to fight terrorism and strike at terrorists on the one hand and strengthen settlement with the other.”

The U.S. State Department condemned the Hebron shooting, as well as the killing of another Israeli soldier last week, saying in a statement that “such violence and terror are unacceptable, and undermine efforts to establish the positive atmosphere the parties need to progress in peace negotiations.”

Israeli Opposition Leader Shelly Yachimovich, chairwoman of the Labor Party, wrote on Facebook that Netanyahu “should not capitulate to terror and should continue in the negotiations toward a diplomatic agreement” with the Palestinians.

“This lethal attack illustrates the complex security challenges the IDF faces on a daily basis in Judea & Samaria,” said Lt. Col. Peter Lerner, a spokesman for the Israel Defense Forces. “The IDF will employ the necessary means, operational and intelligence, to apprehend those responsible for this deathly attack.”