Seeking Kin: The quest to honor an Arab hero doctor 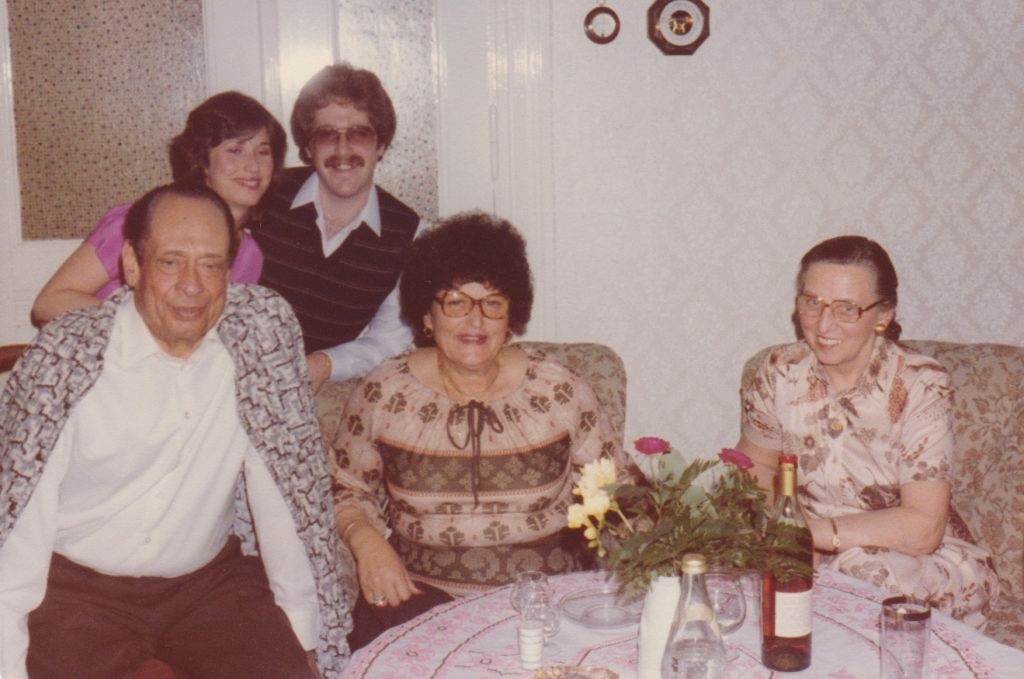 At their Berlin home in 1980, Mohamad and Emmi Helmy flank Anna Gutman; Carla Greenspan and her husband, Barry, appear behind them. (Courtesy Carla Greenspan)

BALTIMORE (JTA) — For Carla Greenspan, the news was upsetting: A relative by marriage of the man who saved her mother’s life during the Holocaust was spurning an award from Yad Vashem.

“It’s a sad legacy for him if this is truly how they feel,” Greenspan said from her home on Manhattan’s East Side. “Their great-uncle went out of his way and risked his life to save my mother.”

Mohamad Helmy, an Egypt native who worked as a physician in Berlin when World War II broke out, helped hide the family of Anna Gutman (nee Boros), Greenspan’s mother. For his bravery, Yad Vashem recently recognized Helmy as Righteous Among the Nations — the first person from the Arab world to be so designated since the award’s establishment in 1963.

But Mervat Hassan, a Cairo-area resident and wife of Helmy’s unnamed great-nephew, told The Associated Press that the couple would not accept the award because of its source — Israel’s preeminent Holocaust-commemoration institution.

“If any other country offered to honor Helmy, we would have been happy with it,” Hassan was quoted as saying.

Greenspan says she doesn’t want to “rush to judge” Helmy’s relatives, since they might face harm or ostracism in Cairo for accepting the award.

She shared with “Seeking Kin” several documents relating to her family’s connection to Helmy. All were contained in an old suitcase that her brother Charles has kept since their parents’ death; Anna Gutman died in 1986. Greenspan also provided photographs that show Helmy.

Despite the spurning by Helmy’s kin, Yad Vashem said it was searching for other relatives so it can have a recognition ceremony. Officials from the Jerusalem institution had told “Seeking Kin” that they possessed no images of Helmy, who died in 1982, and that the publication of such pictures could help spark recognition by relatives or friends.

Helmy and a friend or colleague, Frieda Szturmann, had hid the family — Anna; her mother and stepfather, Juliana and Georg Wehr; and her grandmother, Cecilie Rudnik — in multiple locations in and around Berlin from March 1942 until the war ended more than three years later. The family later moved to the United States.

Dieter Szturmann said in an interview that he would gladly accept Yad Vashem’s medallion and certificate in memory of his grandmother, who died in 1963 at age 66. His late father, Gunther, often spoke of Frieda’s heroism, he said.

“For my grandmother, it was very dangerous to save these people, so he was very proud, and I am, too,” said Szturmann, 67, a retired computer technician for a Berlin high school.

On their 1969 visit to Berlin, a teenage Carla Greenspan is shown with her mother, Anna Gutman, and their hosts, Mohamad and Emmi Helmy (Courtesy Carla Greenspan)

Among the documents shared by Greenspan was the copy of a letter her mother wrote after settling in America. It was sent to the West Berlin municipality and conveyed the circumstances of the heroism displayed by Helmy and Szturmann. Berlin’s archives recently discovered Anna’s letter and forwarded it to Yad Vashem, setting in motion the process leading to the Yad Vashem decision to honor the two.

A document dated June 10, 1943, and typed on the letterhead of Berlin’s Central Islamic Institute attests to Anna being a Muslim. Helmy forged the document, Greenspan said. There is a medical chart for a blood test on one of the Wehrs that Helmy, the family’s physician, conducted on July 27, 1945. Helmy also had employed Anna before the war.

Greenspan remembered traveling with her parents and brother in 1969 to visit Helmy and his wife, Emmi, in their Berlin home. In 1980, Greenspan and her mother visited the Helmys again, this time with Greenspan’s husband, Barry. Anna kept in touch with Helmy until his death, Greenspan said.

For much of the war, Anna was hidden in a bunker on Helmy’s property. Her grandmother was sheltered by Szturmann, who apparently lived near Helmy’s country home. The Wehrs were sheltered elsewhere.

Only after the Nazis’ defeat did the Helmys marry, since their relationship was forbidden under the regime’s Aryan-purity laws. The couple never had children, Greenspan said.

Szturmann has the brief letter that his grandmother received from Willy Brandt, then West Berlin’s mayor and later the chancellor of West Germany.

“The Berlin Senate expresses its thanks and appreciation to Frieda Szturmann for having protected and helped persecuted people during the Nazi regime despite danger to her safety,” Brandt wrote on Nov. 8, 1962.

Szturmann said he learned of his grandmother’s designation by Yad Vashem from a Berliner Morgenpost newspaper article in early October. He then emailed a Yad Vashem affiliate in Germany to tell of his connection, and the email was forwarded to Jerusalem.

While Helmy is the first person from the Arab world to be designated by Yad Vashem,  more than 60 Muslims who saved Jews in Bosnia, Albania and the then-Soviet republics have been recognized, said Irena Steinfeldt, director of the Righteous Among the Nations department.

Despite the Hassans’ refusal to accept the honoring of Helmy, Yad Vashem is pursuing several avenues, including Egypt’s embassy in Tel Aviv, to locate additional relatives.

The Egyptian diplomats “have told us that inquiries are being made in Cairo in the search for other family members of his,” said Susan Weisberg, a Yad Vashem official. “Once a family member has been located, then of course we will have a recognition ceremony and will be able to present his family with the certificate and medal in his honor.”

For now, she said, the items are being displayed in an exhibition, “I Am My Brother’s Keeper,” that marks the half-century since the Righteous Among the Nations program’s launch.

Should Helmy kin be found who’d like to attend the ceremony — usually held at Yad Vashem or in the honoree’s (or relatives’) home country — Greenspan said she would like to attend.

“It would be a very momentous occasion,” she said. “Why wouldn’t I go? Obviously I do appreciate what he did. If it weren’t for him, I wouldn’t be here, and my kids wouldn’t be here.”

On another level, Greenspan said, she is satisfied by having attended a far more important gathering: When she met Helmy and expressed appreciation for his actions.

“I already said thank you to Dr. Helmy,” she said. “I already met the most important man.”

(Please email Hillel Kuttler at seekingkin@jta.org if you know the whereabouts of Mohamad Helmy’s relatives. If you would like “Seeking Kin” to write about your search for long-lost relatives and friends, please include the principal facts and your contact information in a brief email. “Seeking Kin” is sponsored by Bryna Shuchat and Joshua Landes and family in loving memory of their mother and grandmother, Miriam Shuchat, a lifelong uniter of the Jewish people.)