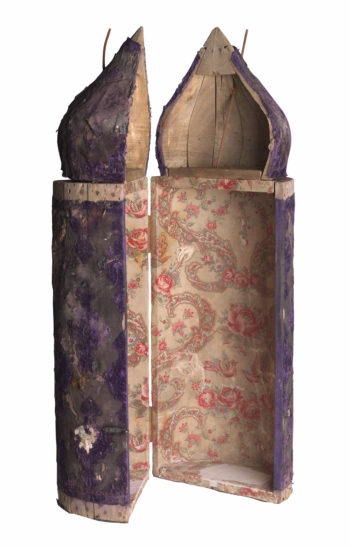 A restored Torah case among the items in the Iraqi Jewish archive. (Courtesy National Archives)

WASHINGTON (JTA) — The National Archives opened to the public an exhibit of Iraqi Jewish artifacts it restored.

The exhibit displays 24 of thousands of items discovered by U.S. troops in 2003, after the U.S. ouster of Saddam Hussein.

The troops found the items in the waterlogged basement of Iraqi intelligence headquarters.

The items were shipped to the National Archives, where experts set about restoring them, and the exhibit that opened Friday, which will be on display through Jan. 5, is the first opportunity to see them.

A number of Jewish groups and U.S. lawmakers have protested plans to return the items to Iraq, where there are virtually no Jews, and want the items to remain in the custody of one of the expatriate Iraqi Jewish communities.

Describing the events of 2003, Anthony Godfrey, the State Department’s director of Iraq affairs, who was attending the media opening on Thursday, said a handover of the archive to expatriate Iraqi Jews was not in the cards.

“The theft and expatriation of all of Iraq’s patrimony was happening and the commitment to the Iraq government at that time was in order to demonstrate that this was not that kind of event,” Godfrey said.

“We wanted to make sure we made this very distinct, and the government of Iraq and the ministry of culture and the coalition provisional authority agreed with the United States only to allow the export of these materials only on those conditions and we viewed this as a very important commitment.”

Godfrey said that the agreement helped salvage the archive.

“I have to underscore that without this commitment and without the preservation of these documents the materials now known as the Iraqi Jewish archive simply would not exist.”

He said an advantage of the return of the archive would be that more Iraqis would “know the important role of Iraqi Jews in Iraq’s history.”