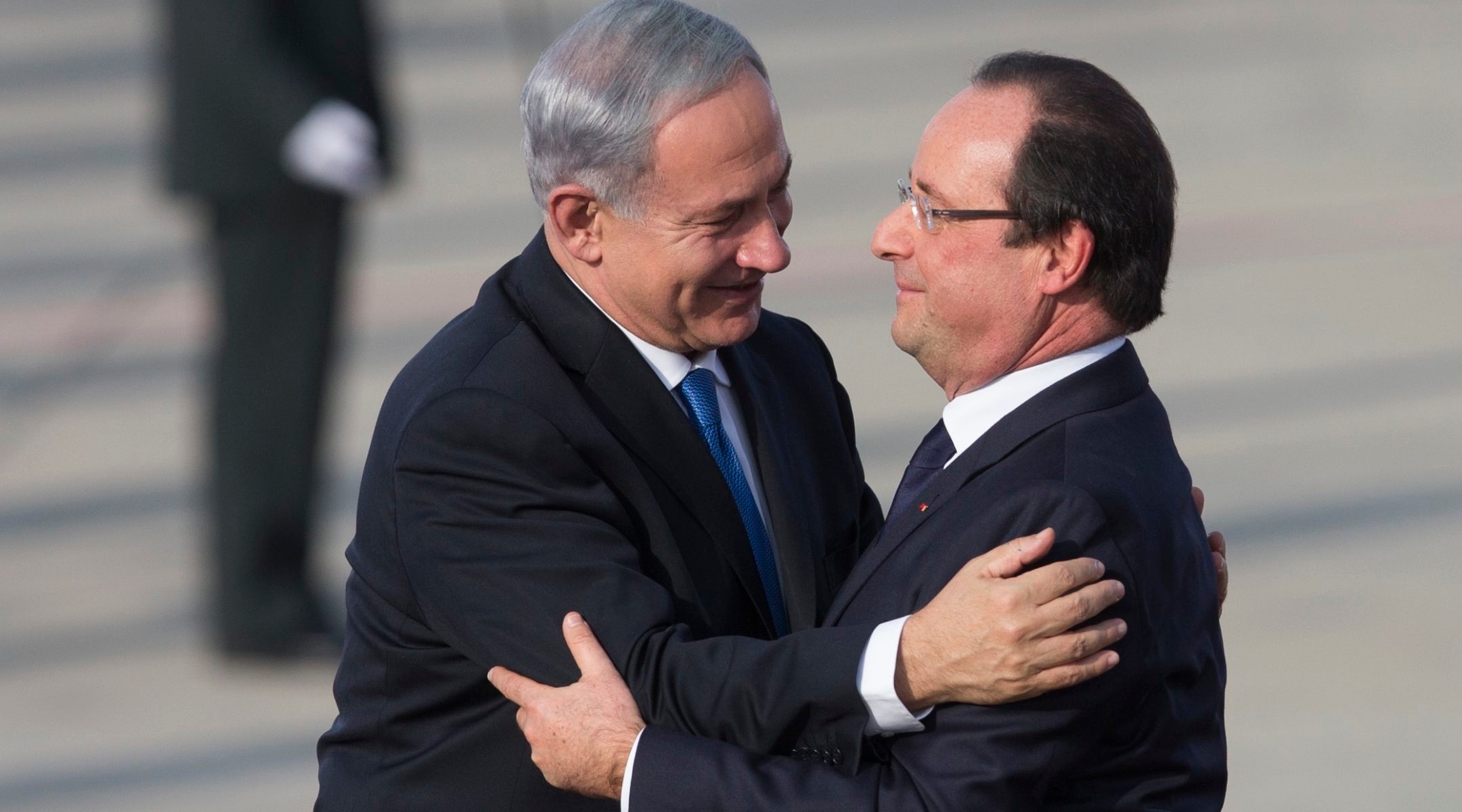 (JTA) — For Francois Hollande, the most unpopular head of state in France in more than half a century, his first presidential visit to Israel and the Palestinian Authority promised a respite from the daily pummeling over his country’s stunted economy and his perceived flimsiness as a leader.

In Israel, everything was set for a hero’s welcome for someone who supported Europe’s blacklisting of Hezbollah’s military unit, waged a relentless war on anti-Semitism and scuttled a nascent deal over Iran’s nuclear program that was stridently opposed by Jerusalem.

“I will always remain a friend of Israel,” Hollande said in Hebrew upon arriving Sunday at Ben Gurion Airport.

Israeli Prime Minister Benjamin Netanyahu returned the sentiment, calling Hollande “a leader with principles and deep humanity” — praises that reflect the gratitude many Israelis and French Jews feel toward a man who has transformed France from one of Israel’s fiercest European critics into an important ally.

Controversy threatened to derail Hollande’s visit even before he arrived.

A planned speech to the Israeli Knesset was canceled briefly after Hollande decided he would prefer to follow President Obama’s lead and address university students. Outraged, Knesset Speaker Yuli Edelstein nixed a reception for Hollande and froze cooperation with the French Embassy on the visit.

France’s foreign minister, Laurent Fabius, ended the row on Nov. 9 with his announcement that Hollande would address the Knesset after all.

“I know you rely on your own strength for defense, but know that France is your friend and will not allow Iran access to nuclear arms, for it would a be threat for Israel and the world,” Hollande said in his address to the parliament Monday evening.

“Everything must be done to solve this crisis through diplomacy,” Hollande said, adding: “We shall maintain sanctions until Iran has renounced its nuclear program.”

In the French media, the Knesset incident received considerable play because it touched on Hollande’s Achilles’ heel: His perceived indecisiveness, even among members of his own Socialist Party.

“Hollande is more of a grayish leader. He’s not a star like some of his predecessors, including Francois Mitterrand and Nicolas Sarkozy,” said Daniel Shek, who served as Israel’s ambassador in Paris during Sarkozy’s term from 2007 to 2012.

Along with this perception of weakness, Hollande is contending with a worrisome financial crisis and a large rise in the unemployment rate, which has reached 26 percent among the young — more than triple the rate in Germany. Earlier this month, the Standard & Poor credit agency cut France’s rating for the second time this year, exposing Hollande to the charge that he is not delivering the growth and welfare he promised.

Indeed, popular support for Hollande is at a record low. A poll released Sunday by the market research firm IFOP found that Hollande’s approval rating had plunged to 20 percent, a dramatic falloff from the 54 percent he enjoyed following his election in May 2012 and two points below the previous all-time low set by Mitterrand in 1991.

But on issues of particular importance to French Jews, Hollande has a stellar record. Since his election, hundreds have been arrested and dozens convicted for anti-Jewish violence and incitement. And last year, the president cleared his schedule unexpectedly to accompany Netanyahu to Toulouse for a memorial for the four victims of a French Islamist attack on a Jewish school there in 2012.

Such overtures may make French Jews more forgiving of Hollande’s shortcomings on other fronts — but probably not much.

“It would be incorrect to call Hollande popular among French Jews, who also worry about the economy as all French citizens do,” said Roger Cukierman, president of the CRIF umbrella group of Jewish communities in France.

On Israel, Hollande reversed France’s objection to the European Union blacklisting of Hezbollah’s military wing. Then, earlier this month, France blocked a deal between world powers and Iran, taking a harder line than the United States over the terms of an accord.

“These moves were not born of any desire to curry favor with Israel,” Shek said, “[but] the French position was nonetheless appreciated in Jerusalem.”

This was not expected of Hollande when he first sought to replace Sarkozy, a right-leaning leader seen as more responsive to Jewish concerns than his predecessors. Some French Jewish leaders — including Cukierman’s CRIF predecessor, Richard Prasquier — warned that a Socialist in the Elysee Palace may hurt Franco-Israeli relations because of a perceived anti-Israel bias among the French left.

“So far, the opposite has been the case,” said Yaron Gamburg, a media adviser at the Israeli Embassy in France. “If anything, there has been a deepening of the sturdy partnership that existed during the term of Sarkozy.”

In addition to his political support, Hollande has been willing to advance bilateral trade with the Jewish state — something his predecessors limited, many believe, to avoid angering Arab states. French exports to Israel currently stand at $1.5 billion — 33 percent lower than Britain and nearly half the volume of Italy.

Joining Hollande in Israel are dozens of French businessmen, and several bilateral trade agreements are expected to be signed during the visit, which ends Tuesday. In his Knesset speech, Hollande said he has decided to jump-start scientific, cultural and commercial exchange with Israel.

Though Hollande has continued France’s condemnations of Israeli construction in eastern Jerusalem and the West Bank, in his visit Monday to Ramallah he said the Palestinians should give up their call for a return of refugees to Israel in exchange for a freeze on Israeli settlement construction.

Hollande in the seat of the Palestinian Authority said it was “urgent” that Israel reach an accord that creates a Palestinian state with “joint control” in Jerusalem.

“The Palestinian issue is the one area where France and Israel differ — and even there, under Hollande the French partners are very open,” Gamburg said. “There are no surprises.”

Some argue that such openness is an improvement to relations under Sarkozy, who despite vowing to improve Franco-Israel relations, cast a surprise vote in favor of UNESCO membership for the Palestinian Authority in 2011.

“Sarkozy, who raised many hopes, ended up disappointing Jews and Israelis because he was unreliable,” said Joel Rubinfeld of the Brussels-based European Jewish Parliament. “Hollande’s presidency began amid doubts, but ended up instilling trust that Sarkozy never had.”