In Jerusalem, calm after the storm 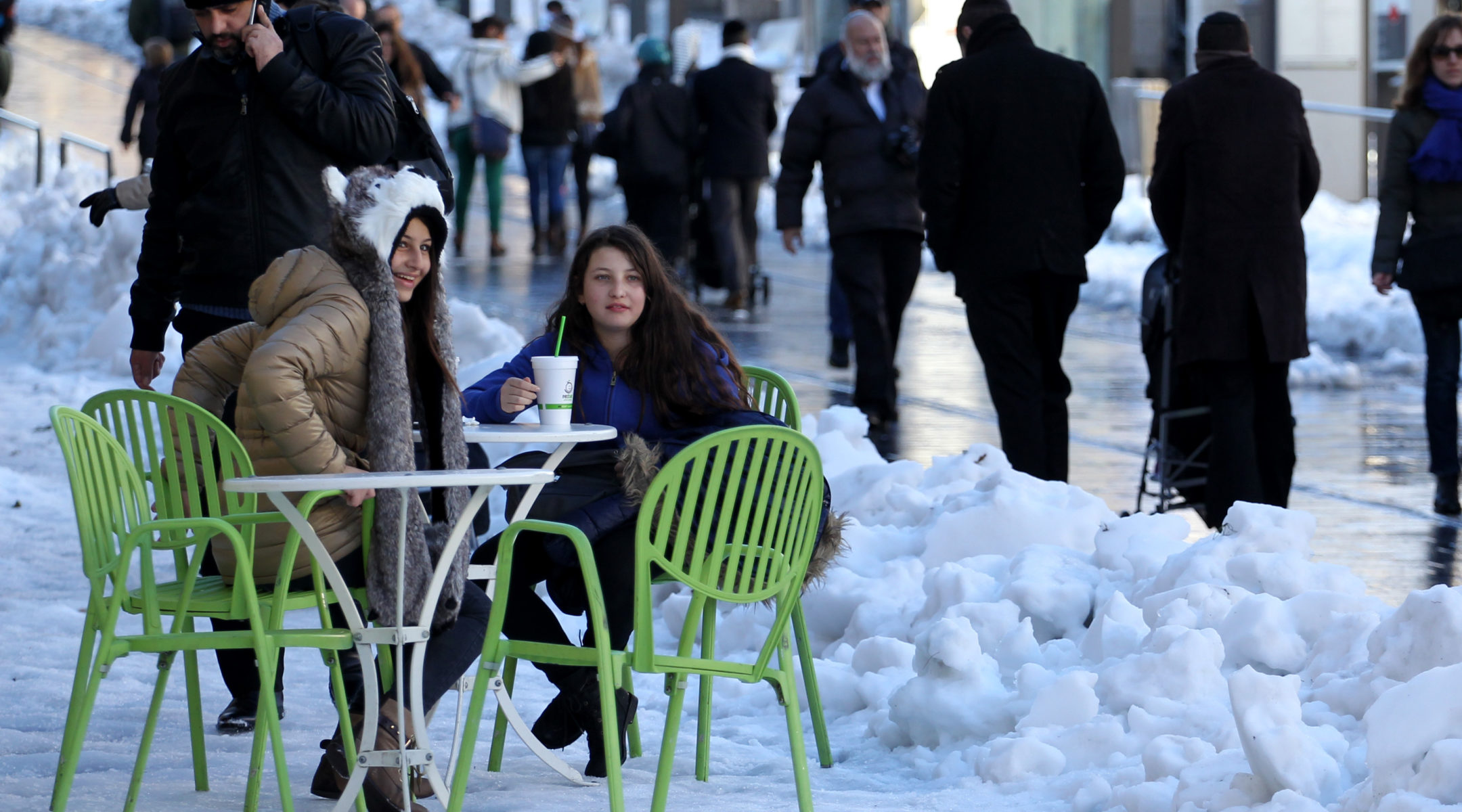 A cafe table is set up amid the snow on Jerusalem's Jaffa Road on Dec. 15, 2013. (Hadas Parush/Flash 90)
Advertisement

Only about 20 minutes outside of the city did it begin to appear — patches of white on the rough hills abutting the road, sprinklings of flakes on the pines. By the time our bus reached Mevasseret Tzion, near Jerusalem, the snow was blanketing the ground, building up in clumps near the highway, caked on the roof of a car parked on the shoulder. Next to the entrance to the Central Bus Station, a six-foot-high snow bank eclipsed the heads of a group of shivering soldiers.

The blizzard had captivated the country since it first hit on Thursday. Up north, cities got three feet of snow; in Jerusalem the figure was 16 inches — the biggest snowfall in half a century, upending Israel’s routine.

Four people died. Thousands remain without power. During the weekend, Prime Minister Benjamin Netanyahu called an emergency meeting of senior officials. On Saturday, for the first time in recent memory, buses ran on Shabbat, allowing access to roads that remained closed to civilian vehicles. The defense minister urged calm while the government plowed through.

To Israel, it was a national emergency, but to me, it felt like home. By Sunday, the worst was over. I could barely see my breath in the Jerusalem air as I walked through the snow, feeling, for the first time in two years, that real winter had arrived. For me, a child of Chicago’s north suburbs, this is what mid-December is supposed to be: snow merging sidewalk and road into a single white sheet, the sun melting it into slush, the movements of the city marked in rows of footprints and tire tracks.

But Jerusalem, of course, will never be Chicago. A storm that perhaps would have upended the Windy City for a day was still shutting down Jerusalem three days after the fact. Exiting the bus station, I walked to the city’s light rail to find it out of service. On my way, a girl formed a snowball in her hand; unsure what to do, she tossed it on the ground.

In the train’s absence, the light-rail track had become at once a pedestrian walkway and a venue for the city’s snow art. A religious man and his daughter fashioned what looked like a snow dragon. A few blocks down, a fan of the Beitar Jerusalem soccer team built an igloo in honor of the club.

Native-born Israelis trudged through in inadequate gear, save for haredim, whose European-style coats and hats came in handy. Americans and Russians, more sanguine, seemed to just go about their business.

Even as Jerusalem slowly came back to life, signs of the storm’s damage were everywhere. Fallen trees and still-unplowed snow rendered empty the usually bustling Zion Square. Outside the Old City’s Jaffa Gate, teenagers posed next to a tree uprooted by the wind. Aside from the Mahane Yehuda market, most of the shops on Jaffa Road, Jerusalem’s main artery, were closed.

As the sun set, men leaving the Western Wall came out the Old City’s other end. With most buses still off the road, taxi drivers offered service to anywhere in the city — for triple the fare. Some people took the deal; others negotiated. A few tried their luck hitchhiking. Snow, after all, can only change Jerusalem so much.