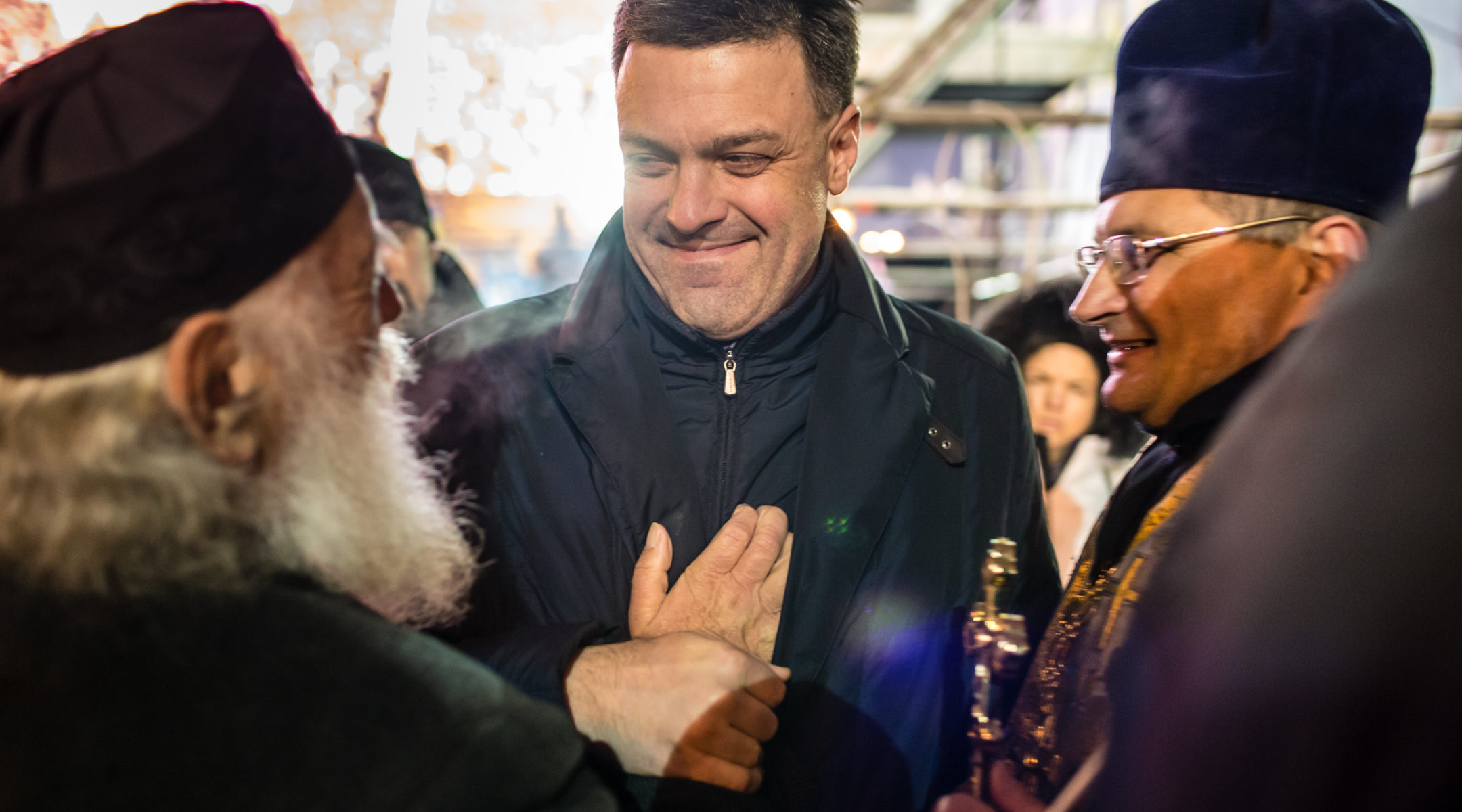 KIEV, Ukraine (JTA) — From the moment of its spontaneous combustion on Nov. 21 and for weeks thereafter, the mass protest encampment in the center of Kiev set up to oppose the Ukrainian government’s decision not to sign a comprehensive free trade agreement with the European Union appeared to represent the epitome of 21st-century European values.

The activities of the vast, multi-ethnic crowd in Maidan Square quickly came to be called Euromaidan and celebrated themes of democracy, pluralism and an end to government corruption. But the uplifting mood began to change in early December when Ukraine’s three main opposition parties — Fatherland, UDAR and Svoboda — began to take control of Euromaidan.

Activists of the ultranationalist, anti-Semitic and grotesquely misnamed Svoboda (Freedom) soon came to the fore, giving the protests a progressively darker and more violent edge. A turning point came during a mass march through the center of Kiev on Dec. 10, when a group of Svoboda activists, led by members of parliament, toppled a statue of Lenin while chanting an ominous warning to the president: “Yanukovych, you’ll be next!”

Ever since the breakthrough success of Svoboda in the 2010 elections, leaders of Fatherland and UDAR repeatedly have declined entreaties from myself and many other supporters of democracy in Ukraine to break their electoral alliance with Svoboda, apparently seeing the party and its leader, Oleh Tyahnybok, as essential partners in the coalition to topple President Viktor Yanukovych.

Yet during the last days of December, as momentum slipped from the demonstrators with news that Yanukovych had buttressed his position by accepting a $15 billion loan package from Russian President Vladmir Putin, Fatherland leader Arseniy Yatsenyuk and UDAR chief Vitali Klitschko must have become acutely aware that Svoboda’s growing profile was tarnishing the protesters’ claim to membership in the camp of modern-day Europe and not the fascist Europe of 70 years ago.

This became crystal clear during a cringe-inducing vertep, a comedic skit based on Ukrainian folk tradition, performed on the main stage at Euromaidan on New Year’s Eve. Based equally on the birth of Jesus and contemporary Ukrainian politics, the lead role was played by a Svoboda parliamentarian named Bogdan Benyuk, who donned black garb and sidelocks to play a stereotypical Orthodox Jewish wheeler-dealer character called Zhyd (Kike). Explaining to the crowd that he is involved in various occupations — including banking, stock market speculation, loan sharking and hosting a talk show — the Jewish oligarch character sings gleefully, “East and West belong to me; our people are everywhere.”

Zhyd creates problems for the newborn Jesus and contemplates taking a bribe from a character evoking both Yanukovych and King Herod to help him crush the protesters. Fascinatingly, the Jew switches sides and joins the opposition when he learns that on orders from the king, the regime’s forces are preparing to kill Jewish firstborns. The audience is given to understand that the shift in loyalty is due not to a belated outburst of conscience, but rather because Zhyd is worried the regime may turn on his own people.

The bottom line of the supposedly all-in-good-fun skit — it was followed by a solemn singing of the Ukrainian national anthem and congratulatory speeches by Yatsenyuk, Klitschko and Tyahnybok — appeared to be that while perfidious Jewish oligarchs care only for the welfare of Jews, given their supposed power and influence it’s preferable for the opposition coalition to have them inside the tent pissing out rather than the other way around.

Even more jarring imagery came to the fore the following day when 15,000 opposition members greeted the new year by marching in a Svoboda-sponsored torchlight parade down Central Kiev’s Kreshatik Boulevard in commemoration of the 105th anniversary of the birth of Stepan Bandera, an ally of Nazi Germany whose followers participated in massacres of Ukrainian Jews. Marchers carried red and black nationalist banners and shouted nationalist slogans as they cheered Tyahnybok and expressed their undying love for Bandera.

On Jan. 7, the U.S. Senate unanimously adopted a resolution calling on the Ukrainian authorities to refrain from the use of force and maintain a national reconciliation dialogue with the opposition, while calling on all parties to refrain from hate speech and anti-Semitic actions. Clearly, while still sympathetic with the declared democratic aspirations of the opposition, neither the United States nor the European Union will long tolerate the growing ascendancy of Svoboda.

To salvage their remaining credibility, Yatsenyuk and Klitschko must immediately denounce the neo-fascist drift of recent weeks and break off their alliance with Svoboda. Then they should sit and negotiate with the Ukrainian government and leaders of the country’s vibrant civil society, including all the religious communities, to find a solution to the protracted standoff in Kiev that gives hope for a democratic future for Ukraine based on rule of law.

(Oleksandr Feldman is president of the Ukrainian Jewish Committee and a member of the parliament of Ukraine.)