Romania has come a long way on Holocaust remembrance, but denial persists 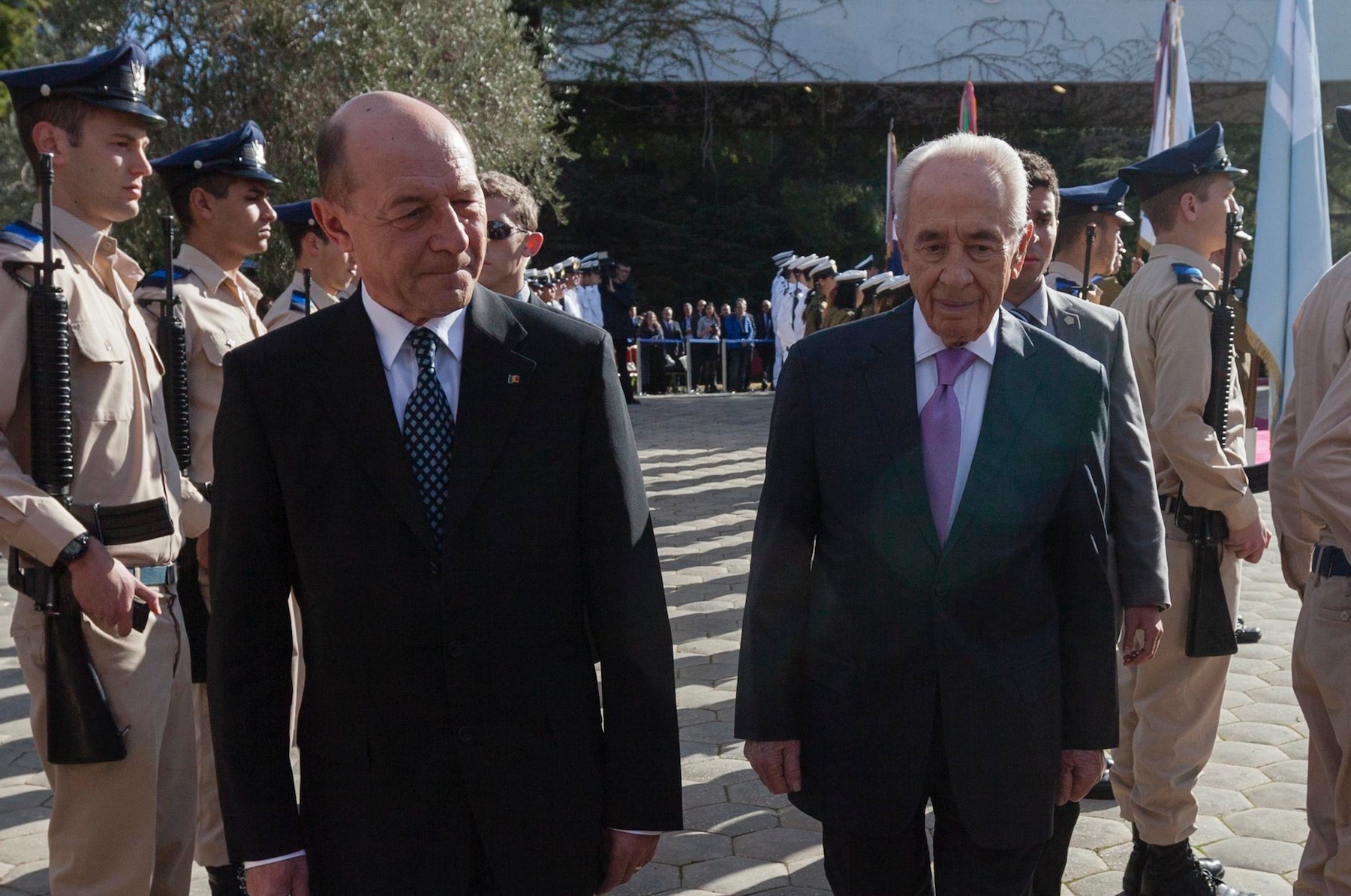 Now here he was in Washington seeing hard evidence to the contrary.

“For over 50 years of communism, we have been taught that Romania did not do that, that this was not real, that we were not involved in the Holocaust,” Basescu told JTA in an interview at the presidential palace Friday ahead of a three-day visit to Israel. “Yet there I was, facing reality.”

A former senior official in the merchant marine under the communist dictator Nicolae Ceausescu, Basescu, 62, wrapped up his three-day visit to Israel on Tuesday. In the region he met with Israeli President Shimon Peres and Palestinian Authority President Mahmoud Abbas.

But it was the visit to Washington nine years ago that convinced Basescu to ramp up Holocaust commemoration efforts. Under his leadership, Romania has owned up to its Holocaust record more directly than ever — progress that has facilitated its integration into the European Union and helped forge lucrative ties with Israel.

The same year as his visit, Romania set up the Elie Wiesel National Institute for the Study of Holocaust. Since the institute’s establishment, more than 100 schools have launched Holocaust education programs, several national monuments have been erected, an official memorial day was designated and laws were passed on restituting lost Jewish property.

Yet failures in the restitution of property and persistent Holocaust denial — even in academia and government — have tarnished the country’s reputation and threaten to eclipse the efforts by Romania to correct the effects of Ceausescu’s denial policy.

“Most Romanians believe the Holocaust happened, but many still think Romanians did not perpetrate it,” Liviu Rotman, a historian at the University of Bucharest, told JTA. “To them it was the Hungarians or the Germans, but never Romanians, despite a wealth of evidence.”

Some 750,000 Jews lived in Romania prior to the Holocaust; approximately half were killed. Romanian troops also were responsible for the massacre of tens of thousands of Ukrainian Jews in Transnistria, the Romanian name for Ukrainian territory occupied by Romania during the war.

In 2012, a politician who denied that Jews had suffered in Romania during the Holocaust was appointed to a ministerial post despite protests by Jewish groups. The politician, Dan Sova, later apologized and said his statement was the result of ignorance.

A few months later, a Romanian member of the European Parliament denied the Holocaust on television. The following year, a prominent historian said it was a “huge lie” that large numbers of Jews were killed in areas under Romania control during the Holocaust, leading to his firing from a teaching post at a German university. And last month, a Romanian state television channel was fined for broadcasting a Christmas carol celebrating the burning of Jews.

Romania has paid a price internationally for the incidents.

The United States and Israel condemned the Christmas carol episode. And last year, the Ukrainian Jewish Committee cited Romania’s supposed refusal to acknowledge responsibility for the killings of Ukrainian Jews in opposing its bid to chair the International Holocaust Remembrance Alliance, a consortium of some 30 countries including the U.S. and Israel.

In the interview, Basescu made no attempt to minimize the problem.

But Basescu’s own record with racism is not immaculate. He has apologized repeatedly for a 2007 incident in which he was heard on tape calling an aggressive journalist a “stinking gypsy.” In the interview, Basescu makes a point of noting that his commemoration efforts are also for “that other minority affected in the Holocaust, the Roma.”

On restitution, Romania’s record also is not without blemish. The country has given the local Jewish community the equivalent of $33 million in cash and stock, a sum that represents a fraction of the hundreds of millions in assets stolen from the Jewish community that the state has promised to return.

“Over the past year, there has been a slowdown in restitution connected to economic problems in Romania,” said Nachliel Dison, the acting director general of the World Jewish Restitution Organization. “So the government is giving us the runaround, bogging down the process in court and negotiations to reduce the payment due.”

Basescu said his country may have been overly confident when it undertook restitution obligations just prior to a real-estate market crash in the first quarter of 2013. But the Romanian leader said he remains committed to returning actual confiscated property — not a monetary substitute — but perhaps only once the economy recovers a little.

“It is an extremely difficult process,” Basescu said, “but it is our ambition to apply this principle.”

Despite low unemployment figures, Romania is one of the European Union’s poorest members and suffers from a drain of skilled labor. On his Israel trip, Basescu sought to deepen economic trade with Israel, an exchange that last year reached $400 million. He also sought to expand cooperation in various areas, particularly in scientific fields, and connect to the 500,000 Romanian speakers in Israel — one of the largest Romanian Diasporas in the world. Some of them are childhood friends who visited with Basescu in 2009 during his last presidential visit.

“They come to see me at the hotel,” Basescu said, “and we catch up.”