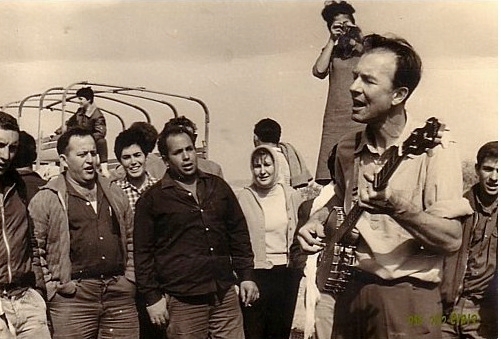 This week, Pete Seeger was being mourned in Israel, as well as the United States.

Several Israelis recalled with nostalgia Seeger’s two visits to the Jewish state in the 1960s. In addition to performances in Tel Aviv and Jerusalem, he played at Kibbutz Kfar Azza.

He also, according to Maya Bloom, an ex-pat Israeli now living in Millburn, N.J., did an impromptu midnight concert at her army base in the Negev.

During Seeger’s 1964 visit (he also came in 1967, just weeks before the Six-Day War), Bloom, whose Bead for Peace group raises money to benefit Jewish-Arab coexistence groups, said her army base’s command car rescued the folk singer and his family, when their car got stuck in a flood. “Our commander pulled out, and he took his banjo out and started to sing,” she told JTA.

These photos of Seeger at Kfar Azza, taken by a now-deceased kibbutznik, were recently posted on Tel Aviv University history professor David Assaf’s Oneg Shabbat blog and are reprinted with his permission.