Anti-Semitism in America: Down, but not out 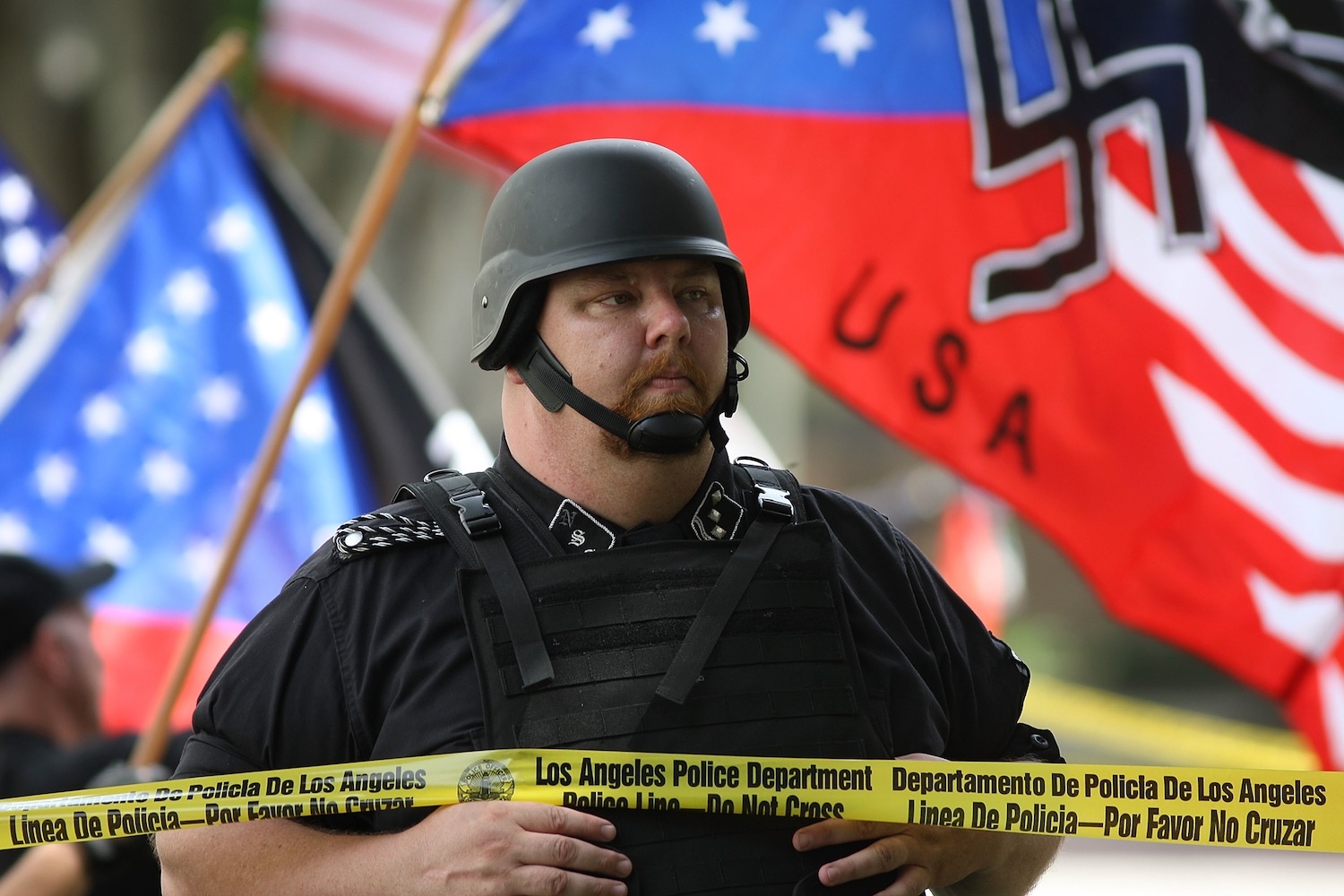 A member of the National Socialist Movement stands behind police tape line during a rally near Los Angeles City Hall on April 17, 2010. (David McNew/Getty Images)
Advertisement

NEW YORK (JTA) — When Abraham Foxman steps down next summer from his longtime post as national director of the Anti-Defamation League, he’ll be leaving his successor with a much brighter picture on anti-Semitism in America than when Foxman joined the organization in 1965.

In an age when anti-Semitic incidents appear to be on the upswing in many parts of the world, America tops the list of countries where Jews suffer least from anti-Semitism, Foxman says.

Jews can live, study and work anywhere they want in America. Yes, there’s Mel Gibson, Louis Farrakhan and the occasional swastika scrawled on a synagogue wall, but Jews in America for the most part live free of discrimination or the threat of violence.

“Statistically, yes, the picture is pretty good,” Foxman told JTA in an interview this week. “We’ve made an awful lot of progress in this country in terms of social anti-Semitism.

In Europe, the wellsprings of anti-Semitism are relatively well-known: the far right, which is the traditional bastion of neo-Nazism; the far left, where Israel-bashing sometimes translates into anti-Semitism; and Muslim extremists.

But where is the anti-Semitism in America? Partly what makes it so difficult to find is that it’s hard to agree on what constitutes anti-Semitism.

The most obvious and easiest to define is classic anti-Semitism: Jew-baiting, swastika scrawling, physical violence.

A recent example cropped up last fall in the Pine Bush school district in upstate New York, when The New York Times ran a front-page story describing how Jewish students there were being bullied, beaten, taunted and harassed while authorities looked the other way. Last month, three Jewish families from the district filed a lawsuit claiming that their children were forced to endure “rampant anti-Semitic discrimination and harassment.”

Then there’s Israel-related anti-Semitism, where there is wide disagreement even among Jews over what constitutes anti-Semitism. When does anti-Zionism become anti-Jewish? Is the boycott, divestment and sanctions movement anti-Semitic? College campuses from California to Florida have become the flashpoint for these battles.

Finally, there is attitudinal anti-Semitism. Approximately 12 percent of Americans hold deeply entrenched anti-Semitic views, according to ADL polling, which uses an 11-question index to measure anti-Semitic opinions. Respondents are asked if they agree with such statements as Jews have too much power in America, Jews are more loyal to Israel than to the United States, and Jews have a lot of irritating faults. (Some critics have noted that some of these statements, such as one about Jews sticking together more than other Americans, also could be answered in the affirmative by respondents who admire Jewish cohesiveness and success rather than harbor genuine anti-Jewish attitudes.)

The proportion of Americans who hold these viewpoints has held relatively study in recent years, at 12 to 14 percent. In 1964, by contrast, roughly 30 percent of Americans held such views.

There are two ways to look at these numbers. On the one hand, as ADL officials often note, some 35 million Americans hold anti-Semitic views. On the other, what are the practical consequence of these attitudes?

“In America, the nature or extent of anti-Semitism has nothing to do with the security of Jews in the United States,” said Jerome Chanes, a fellow at the Center for Jewish Studies at the Graduate Center of the City University of New York.

“There are still crazies out there — 2 percent of people who virulently hate Jews — but who cares? It has nothing to do with the ability of Jews to live normal lives in America or participate in the political process,” Chanes said. “I’m sure there’s anti-Semitism out there, but to tell you the truth, I don’t know where it is. It’s on the Internet, it’s on Farrakhan, but it has no impact on the ability of Jews to participate in society.”

Of the 5,790 bias incidents in 2012 recorded by the FBI, 19 percent were motivated by religious bias, compared to 48 percent by racial bias and 20 percent by sexual-orientation bias, according to the bureau. Of the 1,166 religious bias incidents, 60 percent were anti-Jewish, while the next highest number was anti-Muslim incidents at 13 percent. The approximately 700 incidents of bias against Jews ranged from vandalism to physical assault.

“It’s distressing that Jews are still the No. 1 religious target of bigotry,” Foxman said. “Pine Bush is a wake-up call to say to me that you know what, you have to be careful that these statistics don’t lull you.”

That’s partly why, Foxman says, he’s so quick to speak out when a celebrity says something he considers anti-Semitic.

“If you let the celebrities get away with it, how can you come to a seventh-grader and say you need to stand up and say no?” he said.

“You use celebrities to set a certain standard or message. Therefore, when they engage in what I consider anti-Semitic expressions, it’s not like the average Joe or Sam or Chaim. Because they have this status that our society has given them, and therefore it does reverberate,” Foxman said.

“The gas chambers in Auschwitz did not begin with bricks; they began with words, with ugly words. Because there was no one who stood up and said, ‘Don’t say that!’ I will not be silent.”

By the same token, the ADL takes seriously the spread of anti-Semitism on the Internet, though the organization has not quite figured out how to solve the myriad problems it faces there. Foxman describes the Internet as a “tsunami” of hate speech.

To its critics, the ADL is in the business of selling anti-Semitism, ratcheting up Jewish anxiety for the purposes of fundraising. The organization’s annual budget in 2011 was $54 million, and it has 30 regional offices across the country along with one in Israel.

But at the ADL, its educational and training programs, anti-Semitism monitoring, and legislative and legal efforts are seen as key to “keeping a lids on the sewers” of prejudice, as Foxman puts it.

“There’s a lot of extremism in this country,” Foxman said. “We still have prejudice — against Hispanics, African-Americans, gays and lesbians, Mormons, Asians. The battle for a civil, respectful, tolerant society continues. We haven’t won that battle. We have not found an antidote, a vaccine. Until we find that vaccine, it’s going to be with us.”