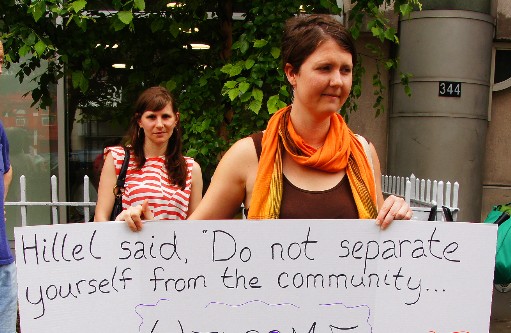 A Jewish Voice for Peace activist protests outside New York City's 14th Street Y in May 2012 after the Jewish institution canceled a “Go and Learn” event organized by the group's youth arm that was scheduled for a rented room in the Y's building. (Courtesy of Jewish Voice for Peace)
Advertisement 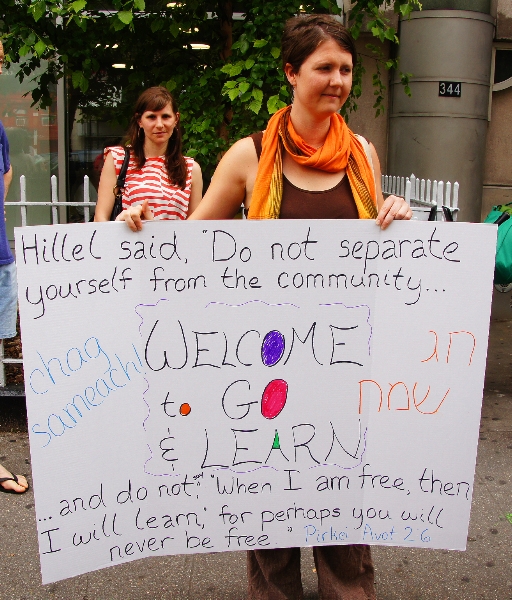 NEW YORK (JTA) — Just how open should Jewish institutions be when it comes to talking about Israel?

That’s the question at the center of a flurry of controversies over the last few days involving Jewish museums, an Orthodox high school and Hillel chapters on college campuses.

For years, Jewish institutions have been grappling with where to draw red lines when it comes to criticism of Israel. Should they open their doors to groups like Jewish Voice for Peace, which is allied with the BDS movement and takes no position on whether or not the Israeli-Palestinian conflict should be solved with one or two states? Should they host speakers who espouse positions some might consider anti-Israel, or close themselves off to these viewpoints to send a clear message that such positions are inappropriate, even if that means never hosting Palestinians? Is a call for boycotting West Bank settlements out of bounds?

The recent cases underscore just how much shifting ground there is on the Israel debate — and how much Jewish institutions are looking over their shoulders.

The quandary for Jewish establishments was captured by a statement issued last week by the head of Ramaz, an Orthodox high school in Manhattan, after he nixed an invitation by the school’s student political club to Arab-American academic Rashid Khalidi.

“We are working with [the students] to navigate a delicate political situation, respecting their wish for open exchange of ideas, but also being mindful of multiple sensitivities within our varied school constituencies,” the school leader, Paul Shaviv, wrote.

Following the cancellation of the event with Khalidi — a Columbia University professor who has argued that Palestinians living under Israeli occupation have a legal right to resistance and that supporters of Israel use McCarthyite tactics to silence debate in America — some Ramaz students launched an online petition to reinstate the invitation.

“I believe it is critical that Ramaz students are exposed to different perspectives and that open dialogue be encouraged at Ramaz — not limited,” the petition reads.

At Vassar College in Poughkeepsie, N.Y., students at the Hillel-affiliated Jewish student union announced their decision last week to embrace unfettered dialogue on Israel, saying they would not abide by Hillel International’s rules limiting Israel-related speech.

The Hillel rules prohibit partnering with or hosting groups or speakers who deny Israel’s right to exist as a Jewish or democratic state; delegitimize, demonize or apply a double standard to Israel; or support the boycott, divestment, sanctions movement against Israel.

The decision by the Vassar Jewish Union follows a similar move last December by students at Swarthmore College, near Philadelphia, who declared an “open Hillel” in contravention of Hillel’s policy on Israel.

“We believe that this policy censors and delegitimizes the diverse range of personal and political opinions held by Jewish students,” the Vassar Jewish Union website says. “We believe that fostering a pluralistic community and supporting all Jewish life on campus cannot be achieved with Hillel International’s Israel Guidelines in place.”

Hillel President Eric Fingerhut declined a JTA request to be interviewed on the subject. Responding to the Vassar announcement, Fingerhut’s office released a statement reiterating the rules of his organization.

“We agree that Hillel should and will always provide students with an open and pluralistic forum where they can explore issues and opinions related to their Jewish identity,” Fingerhut said in the statement. “Hillel will not, however, give a platform to groups or individuals to attack the Jewish people, Jewish values or the Jewish state’s right to exist. This includes groups or individuals that support and advance the BDS movement, which represents a vicious attack on the State of Israel and the Jewish people.”

On the museum front, literary theorist Judith Butler pulled out of a talk she was scheduled to give on Franz Kafka in March at New York’s Jewish Museum amid protests over her support for boycotting Israel.

“While her political views were not a factor in her participation, the debates about her politics have become a distraction making it impossible to present the conversation about Kafka as intended,” the museum said in a statement.

Downtown, the city’s Museum of Jewish Heritage-A Living Memorial to the Holocaust rescinded an invitation to the author of a controversial new book on President Truman and Israel before reinstating the invitation on Sunday.

It’s not clear whether or not these controversies, which seem to be growing in number, are signs of a crumbling of the American Jewish consensus on supporting Israel.

“There’s a real dispute in the scholarly world about whether what we’re hearing is a small, noisy minority or whether what we’re seeing is a harbinger of change,” said Jonathan Sarna, a professor of American Jewish history from Brandeis University. “It certainly is the case that we are seeing more of these issues at the moment.”

For a long time, the communal consensus on Israel has covered most but not all of American Jewry. A significant number of Hasidim — notably members of the Satmar sect — are firmly anti-Zionist, and some voices on the Jewish left long have been fiercely critical of Israel. In both cases, the volume of their opposition to Zionism has waxed and waned depending on events in Israel. During the height of the second intifada, for example, haredi Orthodox voices critical of Zionism were mostly muted.

But in recent years, criticism of Israel has made deeper inroads into the Jewish community, coming during a lack of apparent progress in Israeli-Palestinian negotiations, a dearth of Palestinian terrorist attacks and Israel’s stewardship by a right-wing government.

The question facing American Jewish institutions is what kind of criticism of Israel they should allow.

Concern for donors’ wishes may be the guiding principle, says journalist Peter Beinart, who advocates boycotting West Bank settlements but rejects boycotts against Israel. Beinart was himself disinvited to present a talk about Israel at the Atlanta JCC in the fall of 2012.

“Their perception is there’s this sea of anti-Israel hostility out there and they want these institutions to be sanctuaries from that and places where you incubate people to fight the Zionist fight,” Beinart said.

“The sociological reality is that so many Jewish institutions are reliant on a small group of very large donors, and they don’t have a large donor base anymore,” Beinart said. “Just one or two of them can strike terror into the hearts of a Jewish organization.”

When staffers at the Museum of Jewish Heritage said last week that they had rescinded the invitation to John Judis, author of “Genesis: Truman, American Jews, and the Origins of the Arab/Israeli Conflict,” they cited concerns that “the controversy would overshadow the content.” Judis’ book suggests that Truman didn’t really want the establishment of a Jewish state but was strong-armed into accepting it by a powerful American Zionist movement.

Apparently the museum’s director, David Marwell, made the decision not to hold the Judis event, unaware that an invitation already had been extended by his staff. Once Marwell realized that, he called Judis to reinstate the invitation.

“I have worked very hard over the years to avoid precisely the kind of mess that we found ourselves in,” Marwell wrote on the museum’s website. As canceling the talk would have raised the “ugly specter of succumbing to pressure and giving in to outside influence,” Marwell wrote, the museum would go ahead with a Judis event.

It is now scheduled for June 1.