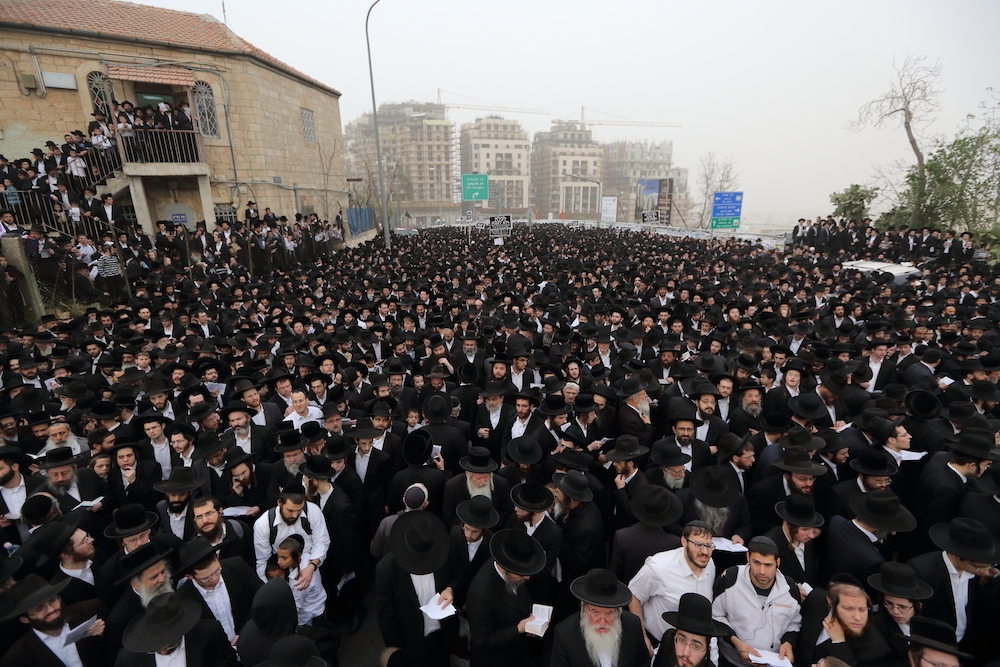 Hundreds of thousands of haredi Orthodox Jews attend a massive protest in Jerusalem against efforts to draft them into the Israel Defense Forces. (Yaakov Naumi/FLASH90)
Advertisement

JERUSALEM (JTA) — Hundreds of thousands of haredi Orthodox men gathered at the entrance to Jerusalem to protest a bill that would require yeshiva students to serve in the military.

The main haredi factions were represented at what was dubbed the “million man protest” on Sunday afternoon. The protest did not have any speeches, just prayers and psalms. Police estimated the crowd at 300,000; protest organizers said it was 500,000.

More than 3,500 police and security personnel were at the site of the demonstration to protect the protesters. The main entrance to Jerusalem was closed to traffic at 1 p.m.; the Jerusalem Central Bus Station closed at 2:30 p.m.

Naftali Bennett, head of the Jewish Home party, made up mostly of modern Orthodox members, called on his party members to stay away from the rally.

“You won’t find any mention of criminal sanctions in the bill,” Bennett said Saturday night. “Those who shout that they need to speak out know that no yeshiva student will be sent to jail. The bill is fair. Military service is not an edict, it’s a mitzvah.”

The measure is likely to be brought before the Knesset plenum this month.

The Tal Law, which allowed haredi men to defer army service indefinitely, was invalidated by the Supreme Court in February 2012 and expired in August that year. Haredi yeshiva students since then have had their drafts deferred.

Modern Orthodox leader Rabbi Haim Druckman on Saturday night called on his community to stay away from the rally.

Another rabbinic leader of the movement, Rabbi Yehoshua Shapira, head of the Ramat Gan yeshiva, changed his mind on Sunday regarding participation in the rally, saying that movement leaders would not attend despite announcing their intent last week to join the rally. Expressions of disrespect by the haredi Orthodox community toward the modern Orthodox reportedly was the reason for the change of heart, according to Israel National News, a modern Orthodox news service.

The Belz Hasidic sect has threatened to leave Israel en masse if the law is passed.