Across the ocean, a poignant end to an Israeli’s search 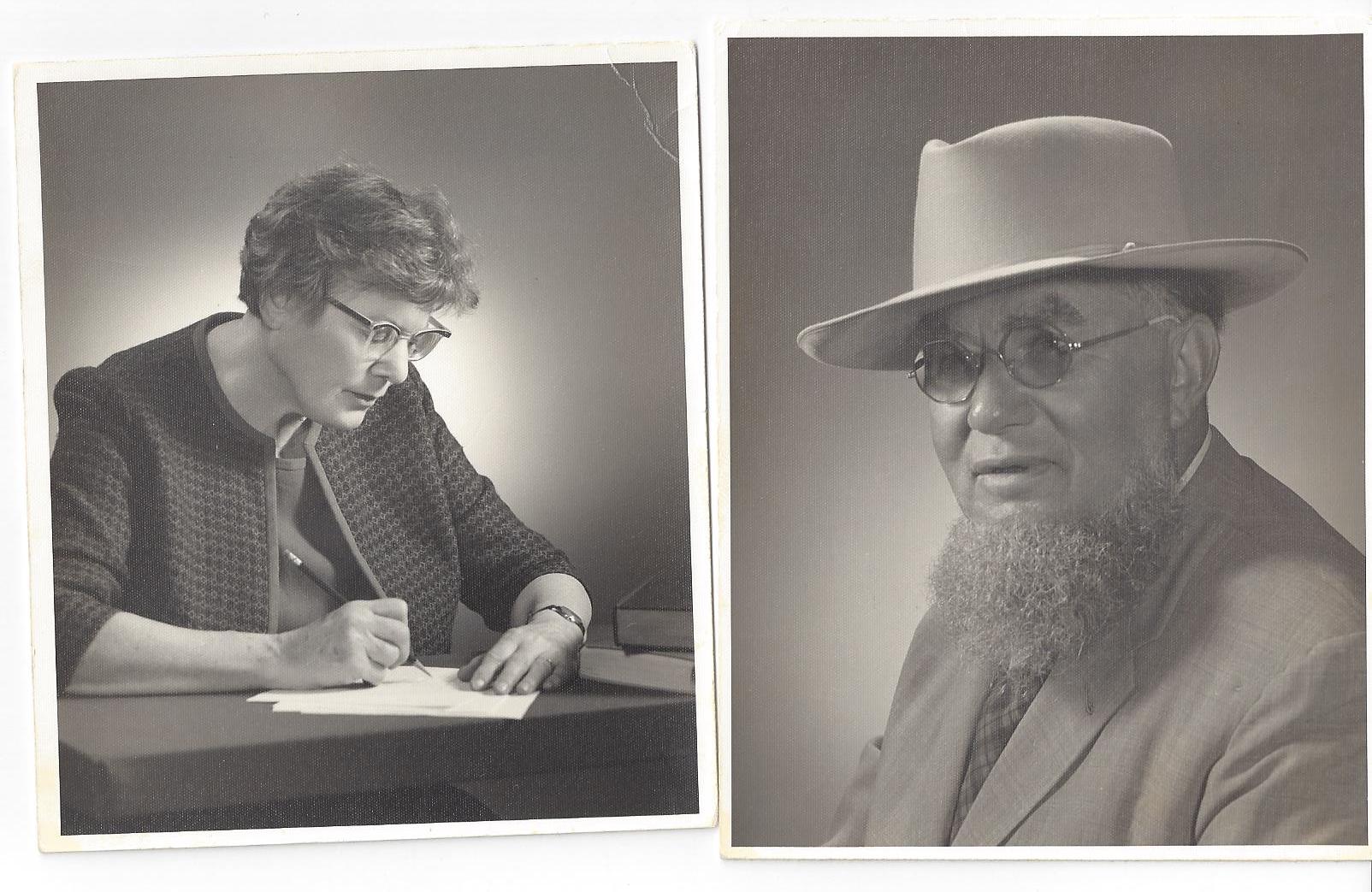 These Allentown, Pa., studio portraits of Lillian and Fillipus Mosesco, were enclosed with a 1965 letter to his cousins in Israel. (Courtesy of Zipora Saar)
Advertisement

BALTIMORE (JTA) — All Zipora Saar had were some letters, names and pictures of American relatives she never knew, people last heard from a half-century ago.

Saar fancied turning up descendants of her mother’s first cousin, Filippus Mosesco, and his second wife, Lillian, who sent the letters from their farm in Macungie, Pa. Filippus was known as Feivush before emigrating as a young boy in about 1902 from the extended family’s hometown of Darabani, Romania.

While the couple was childless, Filippus had a son, Philip, from his first marriage. What became of Philip, whether he became a father – Saar didn’t know.

It wasn’t much, but even across overseas phone lines the 81-year-old Saar, a resident of Moshav Merchavia in Israel’s Jezreel Valley, projected hope in a life once offering none and robbing her of so much. 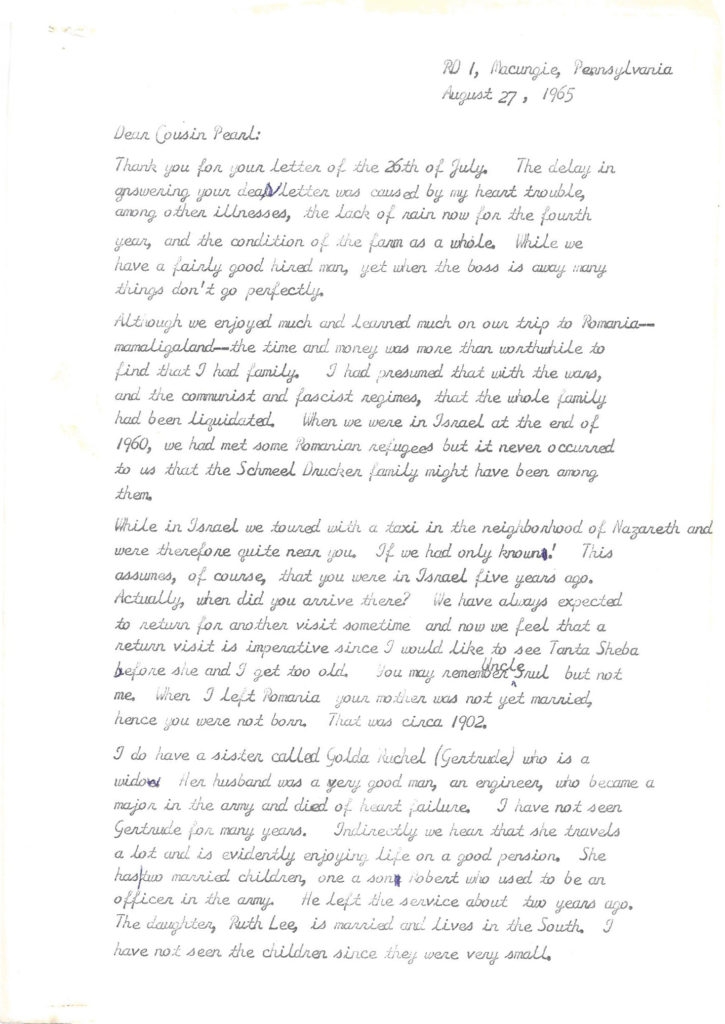 This letter was sent in 1965 by Filippus Mosesco to his cousin in Israel, Pearl Katz. (Courtesy of Zipora Saar)

Saar survived the Holocaust with two sisters and their parents; in 1943, another sister was killed. Saar’s mother, Pearl Katz, was raped. One of the surviving sisters, Sarah, suffered from Holocaust-caused depression and committed suicide in Haifa in 1980. At just 10 years old, Saar, too, was raped, and in Israel her husband beat her.

The cumulative torment forces Saar to take daytime catnaps. She can’t sleep nights, so Saar, a retired teacher, finds comfort in the great literature and classical music keeping her company.

“If I read something good and interesting, I don’t think about the past,” said Saar, who has two sons, six grandchildren and two great-grandchildren.

A longtime listener of “Hamador L’chipus Krovim” (“Searching for Relatives Bureau”), Saar is captivated by the Israeli radio program’s brief interviews of people seeking long-lost loved ones and acquaintances. Maybe, she figured, the show could help her.

As often happens when the missing are American, host Izi Mann asked “Seeking Kin” for assistance. In most cases, the mystery is solved.

Here, too, albeit poignantly.

“Seeking Kin” uncovered rich information about Saar’s relatives, but not what she most craved. Philip, it turned out, had no siblings and died childless in 2005.

Unexpected obstacles nearly stymied the trail: Philip had tweaked his surname’s spelling to Mosescu. Upon marrying his second wife, Dory, he adopted her surname, Walrod.

An obituary for Dory in 2001 mentioned her siblings, and her brother Don Walrod’s 2008 obituary listed his survivors. A phone call to Don’s son, Duane, of Corvallis, Ore., uncovered the first person to have known Saar’s American relatives.

Walrod remembered annual visits to his Aunt Dory and Uncle Philip in the late 1960s and early 1970s in Burlingame, Calif., where Philip served as headmaster of the Moore School. Around 1973, the couple bought a farm in Oregon, where Dory moved her medical practice. 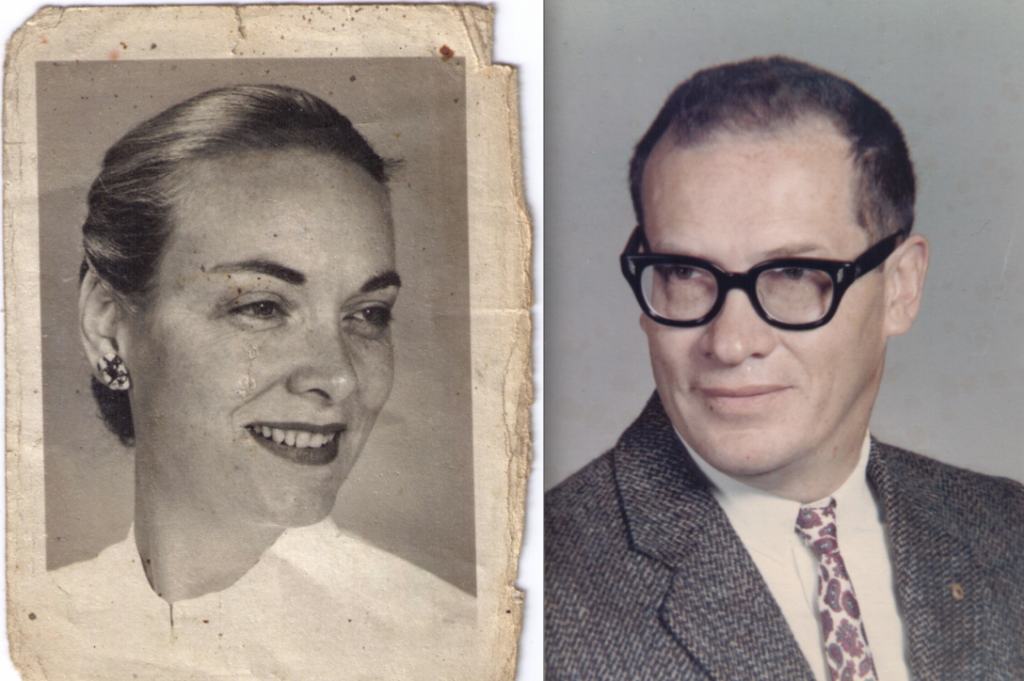 For Dory, said Walrod, “it was like going back to her roots in rural Pennsylvania.”

The Keystone State was where her father-in-law spent much of his life.

A May 29, 1929, article in the Reading News revealed that Filippus Mosesco came to the United States at age 8, skipped school until 17 and fought in World War I. He went on to teach French at Allentown Preparatory School and work as a reporter for the Allentown Morning Call —  both while studying for dual degrees at Muhlenberg College and Kutztown State Teachers College. That summer he would begin a master’s-doctoral program at Lehigh University in nearby Bethlehem.

Mosesco became politically involved. He was a principal correspondent for NAACP conferences in New York in the early 1940s and co-edited The Conscientious Objector. A March 16, 1960, article in the Tyrone, Pa., Daily Herald mentioned his appealing to the American Civil Liberties Union and a Quaker group to assist Amish parents imprisoned for refusing to send their children to high school.

In an Aug. 27, 1965, letter to Saar’s mother in Israel, Mosesco wrote that he and Lillian had moved from New York City to the farm 15 years earlier because of health ailments that included his being “badly disabled” in France during World War I.

The letter discussed his siblings: Golda Ruchel, known as Gertrude; Rebecca; David Joseph; and Pearl. The middle two were unmarried and sickly, living in Philadelphia and Los Angeles, respectively. Gertrude had two children, Robert and Ruth Lee, but their surnames weren’t given. Pearl was a divorcee and widow who disappeared in South America while nursing an infirm businessman.

“Thus, a rather unhappy story of your cousins in the U.S.A.,” Mosesco wrote.

Just seven months later, in March 1966, Lillian was killed in a car accident near the farm. A New York Times obituary mentioned her 37-year career as an editor and author of textbooks at the Prentice-Hall publishing company.

Very early on the Mosescos’ trail, “Seeking Kin” struck gold when the man answering the telephone at a Macungie-area cemetery association said he had driven the ambulance dispatched to the site of the crash. Racing to the hospital, Paul Miller and two colleagues revealed to Filippus Mosesco only that another ambulance was coming for his wife.

Vasillaros discovered that Philip, born in 1921, attended Ohio University and while in Philadelphia in 1942 enlisted in the military. On Nov. 18, 1951, he married Genevieve James, the daughter of Herman James, the university’s former president. They divorced in Florida in 1954 and, on Nov. 12, 1962, Philip married Dory Walrod.

After her death, Walrod moved to Blaine, Wash., where he died in 2005. No doubt remains about Philip Walrod (nee Mosescu) being Saar’s second cousin.

“I’m sorry that no relatives remain,” Saar said, her voice breaking. “There’s no continuity to the family, but this is the reality of life.”

(If you would like “Seeking Kin” to write about your search for long-lost relatives and friends, please include the principal facts and your contact information in a brief email. “Seeking Kin” is sponsored by Bryna Shuchat and Joshua Landes and family in loving memory of their mother and grandmother, Miriam Shuchat, a lifelong uniter of the Jewish people).