Partnership minyans grow among the Orthodox grassroots, despite leaders’ condemnations

A woman leads a partnership minyan at a conference in New York of the Jewish Orthodox Feminist Alliance, December 2013. (Mike Kelly)
Advertisement

Ruth Lockshin of Toronto leads a partnership minyan at a conference in New York of the Jewish Orthodox Feminist Alliance, December 2013. (Mike Kelly)

NEW YORK (JTA) — If it wasn’t clear before, it should be abundantly clear now: The Orthodox establishment will not sanction so-called partnership minyans, and it’s willing to go to the mat to fight them.

In recent weeks, a flurry of articles by leading Orthodox rabbis and scholars have taken aim at the growing phenomenon of partnership minyans, which feature traditional Orthodox liturgy and mechitzah dividers separating the sexes but allow women to read from the Torah and lead certain parts of the service.

Last week came news of a penalty for a rabbinical school student who had attended one such minyan: The New York Jewish Week reported that Yeshiva University’s Rabbi Isaac Elchanan Theological Seminary, known as RIETS, had threatened to withhold rabbinic ordination from a young man who had hosted a partnership minyan in his home.

The threat came in the form of a Jan. 13 letter to the student signed by Rabbi Menachem Penner, RIETS’ acting dean, who said that women leading services or getting called to the Torah for an aliyah are practices “deemed prohibited by all recognized poskim,” or religious authorities.

A rabbi ordained by RIETS “would be expected to not participate in such activities nor create a public impression that he supports such activities in normative practice,” said the letter, a copy of which was posted online by The Jewish Channel.

After news of the threat leaked, Y.U. announced that it had secured a commitment from the student — who had successfully completed his course of study but had not yet formally been granted his certificate of ordination — to uphold the institution’s principles. The student, identified as Shalom, is now cleared to participate in the RIETS ordination event on March 23.

The battle over partnership minyans is just the latest scuffle in the war over women’s roles in the Orthodox community. It comes on the heels of a controversy sparked in January when SAR, a modern Orthodox high school in New York, announced that it was allowing young women to wear tefillin, and it’s part of a continuum of debate on women’s roles in Orthodoxy that goes back decades.

Some changes that proved deeply contentious at the time of their inception are now normative in modern Orthodox circles, such as women’s Talmud study and women’s-only prayer services. Others are still highly controversial, such as ordaining women clergy.

“Whenever there’s change in the Orthodox community, it comes with a lot of birthing pains — by nature it has to,” said Bat Sheva Marcus, one of the coordinators of Minyan Shachar, a partnership minyan that meets at a Reform synagogue in the Riverdale section of the Bronx. “I was very involved in the women’s tefillah [prayer] movement 25 years ago, and the reactions were exactly the same — ironically, because women’s tefillah now is the acceptable option.”

For Orthodox Jews who support expanding women’s roles, the innovations of partnership minyans are a way to bring some of the egalitarianism they experience in other areas of their lives into Jewish practice without breaking the limits of Jewish law, or halachah. Rabbi Daniel Sperber, a professor of Talmud at Bar-Ilan University and the most prominent Orthodox authority on Jewish law who backs these minyans, says that the halachic principle of “human dignity” provides an opening to allow women to take public ritual roles in the synagogue.

To their opponents, these changes are dangerous deviations from halachah made more insidious by the fact that they are happening inside the Orthodox community by Jews who claim to be acting according to Jewish law.

Rabbi Hershel Schachter, a yeshiva head at RIETS, has been the leading voice in the recent chorus of condemnation. In a recent article, Schachter argued that having women lead services or read from the Torah constitutes a religious breach that corrupts the spirit and violates Jewish laws regarding women’s modesty, public dignity and the requirement of deferring to Torah sages.

“It is forbidden for us to adopt new customs such that they will make a mockery of earlier generations,” Schachter wrote in Hebrew.

Partnership minyans have existed on the fringe of the Orthodox community for more than a decade, starting with Shira Hadasha, which was established in Jerusalem in 2002. Over the last decade they have spread rapidly in the United States, including Kol Sasson in Skokie, Ill.; Minyan Tehillah in Cambridge, Mass.; Darkhei Noam in Manhattan and Rosh Pina in Washington. More than two dozen are listed on the website of the Jewish Orthodox Feminist Alliance, though they don’t all meet every Shabbat.

None of the minyans are full-time congregations with daily services, and they operate without congregational rabbis and meet in rented space, usually in Conservative or Reform institutions. Though they draw mostly from the Orthodox community, they also have attracted Jews raised in the Conservative movement looking for more observant communities. The minyans generally avoid calling themselves Orthodox but say they operate within the letter of Jewish law — even if their services upend centuries of Orthodox tradition.

“This is not coming out of the Conservative movement; this is coming from people who regard themselves as Orthodox,” said Marc Shapiro, a Judaic studies professor at the University of Scranton. “These are Orthodox minyanim, structured precisely to appeal to the Orthodox because they claim to be halachic. And it’s a movement from the bottom up.”

In partnership minyans, women may open the holy ark, lead the Kabbalat Shabbat hymns on Friday night and the early morning Psukei D’zimra prayers, read from the Torah and get called to the Torah. But they may not lead the Shacharit or Musaf services — because that would violate Jewish legal precepts requiring prayer leaders to be obligated themselves in the recitation of those prayers (only men are obligated to recite the Shacharit and Musaf prayers at their appointed times, according to Orthodox law).

Because partnership minyans have mechitzah dividers, managing the egalitarianism can require some delicate choreography. The table where the Torah is read must be located in a neutral area accessible by both men and women. Depending on who takes the Torah out of the ark, it may be passed from one side of the room to the other on its way to the table. Some minyans have two lecterns for prayer leaders, one on each side of the mechitzah.

While partnership minyans have made inroads among Orthodox Jews, they’re still kept at arm’s length by Orthodox institutions. A recent article published in Tradition, the journal of the Rabbinical Council of America, the mainstream Orthodox rabbis’ association, concludes, like Schachter, that partnership minyans violate Jewish law.

In a statement issued to JTA, the leaders of the Orthodox Union said they reached the same conclusion.

“The consensus of the rabbis to whom the Orthodox Union turns for halachic guidance is unequivocal, that partnership minyanim are improper,” said the statement, signed by rabbis Steven Weil and Tzvi Hersh Weinreb. “It is our goal to assert this position in a way that strives to maintain the unity of the Jewish people.”

The only Orthodox institution in the country that seems open to the minyans is Yeshivat Chovevei Torah, the liberal Orthodox rabbinical seminary in Riverdale. The founder of that school, Rabbi Avi Weiss, long has stirred controversy for his positions on women’s issues: He ordained the first Orthodox clergywoman several years ago and has established a yeshiva for ordaining women as clergy. His synagogue, the Hebrew Institute of Riverdale, has allowed partnership minyans to take place in the building.

“There’s a lot of disagreement about it, but it’s well within Orthodoxy,” Lopatin said. “It’s just not normative yet.” 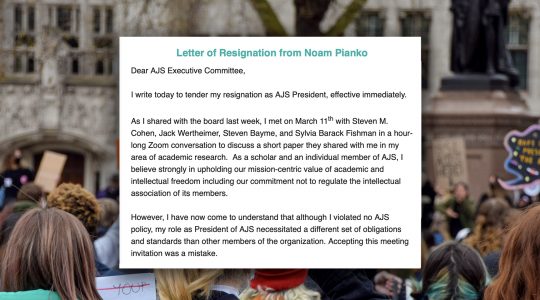 Fox News to ADL: We won’t fire Tucker Carlson for warning of plot to ‘replace’ Americans with ‘Third World’ voters