Op-Ed: Beating back the assault on Israel’s legitimacy 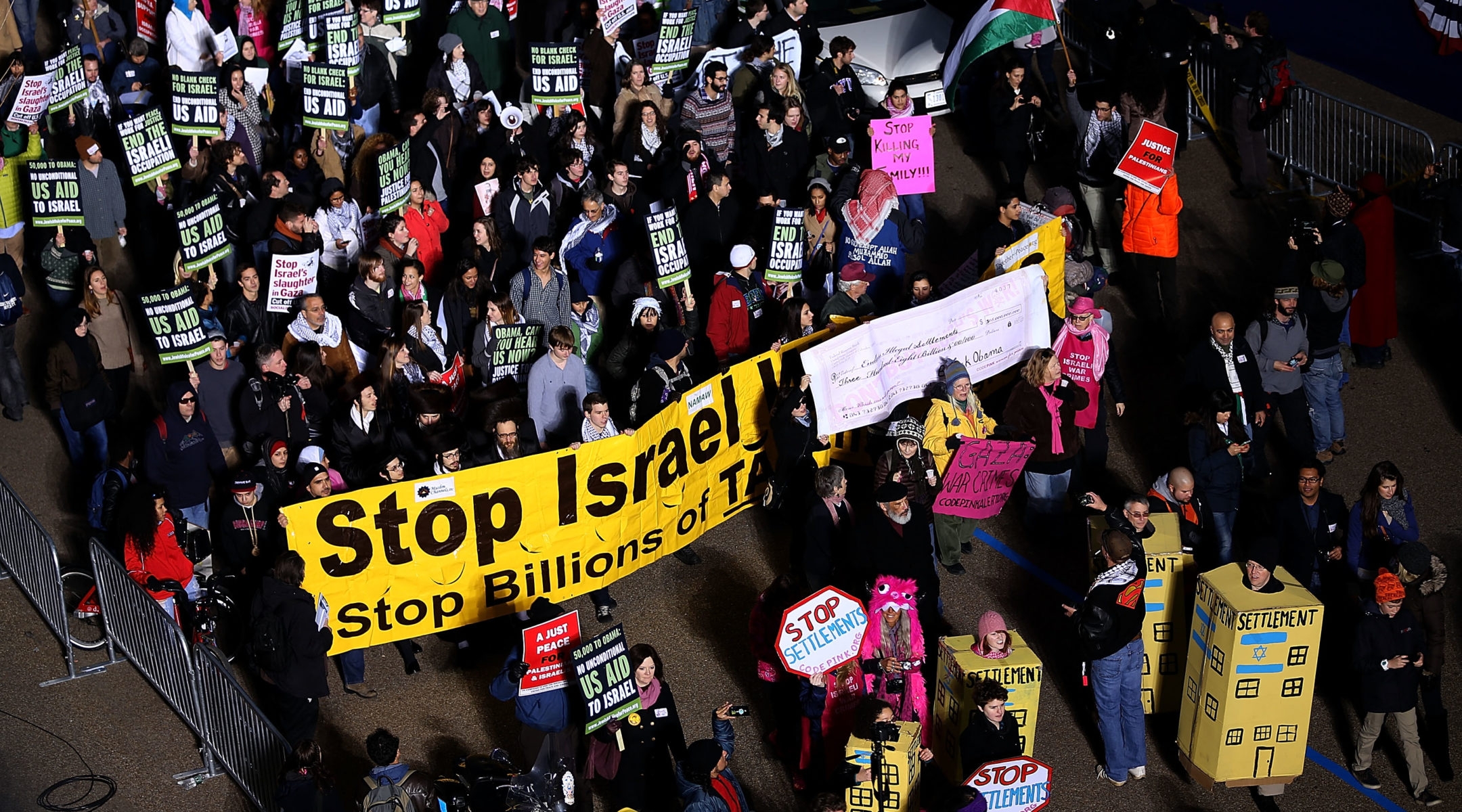 NEW YORK (JTA) — Leaders of the boycott, divestment and sanctions movement say they are protesting Israel’s policies in the West Bank. They are doing far more than that.

BDS advocates routinely oppose a two-state solution and seek to delegitimize the sovereign, Jewish State of Israel. In some cases, BDS becomes the latest form of anti-Semitism.

The BDS movement aims to isolate and punish Israel, using the same techniques applied to apartheid South Africa. Not hesitating to misrepresent facts and ignore context, these Israel bashers take advantage of ignorance and naïveté within civil society circles, mostly in Western Europe, to advance their anti-Israel agenda.

BDS advocates view the situation in the West Bank through a one-way lens, seeing only a single perspective. They cite, for example, the security checkpoints that make life difficult for Palestinians but conveniently overlook the reasons for those checkpoints. They ignore the fact that hurting Israel’s economy would also hurt Palestinians who earn their livelihoods from Israeli-owned businesses.

BDS backers don’t bother to protest the many countries that have horrific human rights records, instead singling out the world’s only Jewish state, often based on false or misrepresented information.

A tipping point for the Jewish community’s response to BDS came in 2009 when a number of anti-Israel groups called for a boycott of the Toronto International Film Festival because one of its themes was Tel Aviv’s 100th anniversary. The Toronto and Los Angeles Jewish federations joined forces and, with the involvement of major figures in the entertainment industry, fashioned an effective response.

With calls for BDS escalating in the mainline Protestant churches, on college campuses and elsewhere, Jewish community leaders realize that the situation calls for more than an ad hoc approach: Local communities need a strategic approach with national support and coordination.

In 2010, the Jewish Federations of North America, representing more than 150 local federations, allocated significant resources so that the Israel Action Network could serve this purpose. The Jewish Council for Public Affairs — with its 16 national member organizations, including all four of the religious movements, and 125 Jewish community relations councils, which work with non-Jewish coalition partners on a range of international and domestic concerns — was the JFNA’s obvious partner.

One principle that guides this work is that we should understand our audiences. And when we speak with others, we should do so with a respect for the sensitivities of that constituency so that our important messages are authentically heard. Whether on a campus, in a church or speaking with an LGBT group, we should always be clear that we stand as partners, sharing the goal of a future with peace and security — not one of conflict and BDS.

Experience and research demonstrate that what works best with these audiences — mostly made up of political and religious progressives — is not an all-good-vs.-all-bad characterization of Israelis and Palestinians. Instead, a more nuanced narrative is the one that is likely to defeat the one-sided and hostile stance of those seeking to delegitimize Israel.

This means honestly conveying the situation’s complexity, expressing empathy for suffering on both sides (without implying moral equivalency) and offering a constructive pathway to helping the parties move toward peace and reconciliation based on two states for two peoples.

Whether we are dealing with a boycott of Israeli academic institutions adopted by the American Studies Association or an attempt to remove Israeli products from a Brooklyn food co-op, the most effective opponents of these initiatives are the people who travel in those circles.

While we in the organized Jewish community should not remain silent in the face of Israel’s delegitimization, we should strongly support and accentuate the efforts of these third-party validators who share our values and viewpoints. The 247 (and counting) universities and colleges that have denounced academic boycotts generally — and academic boycotts of Israel specifically — are just such validators.

It is not enough to only expose the true goals of the boycotters and their allies. Israel’s supporters must also go on the offensive and drain the swamps of ignorance that allow the poisonous ideas of the Jewish state’s opponents to incubate. Thus, we are taking the initiative to inoculate vulnerable politically progressive sectors, presenting a more factual perspective on Israel and taking prominent leaders to the region to see the real situation firsthand.

The Israel Action Network, of course, does not work alone in this arena. On a daily basis, numerous organizations stand up for Israel. Through the IAN, JFNA and JCPA are working together to convene around a common strategic planning table not only our affiliates but also a range of other North American, Israeli and European groups in order to share best practices and coordinate our collective resources in confronting this global danger.