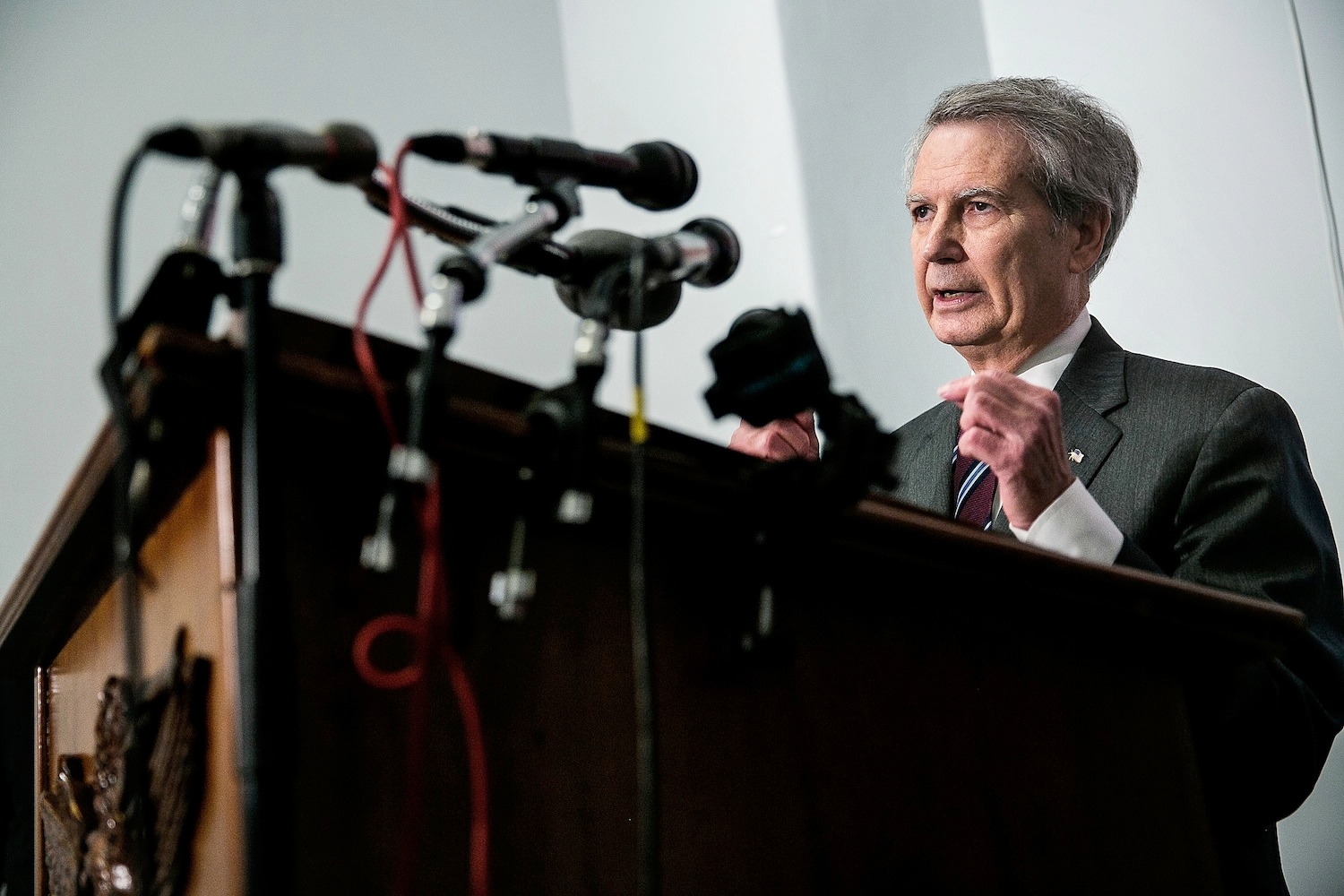 Rep. Walter Jones (R-NC) speaks during a press conference on a bill that would make public 28 pages, currently classified, that were removed from the congressional investigation's report on the terrorist attacks on September 11, 2001. (T.J. Kirkpatrick/Getty Images)
Advertisement

WASHINGTON (JTA) – Rep. Walter Jones wants his constituents to know that advocates of secularism don’t like him.

“In their newly released scorecard, the Secular Coalition for America gave Walter Jones the lowest score of any member of Congress because he constantly voted to protect Judeo-Christian values,” stated a recent press release  featured prominently on the official U.S. House of Representatives website of Jones, a North Carolina Republican.

While Jones is boasting about his cultural conservative bona fides, in his reelection race he is being accused of liberalism.

“Congressman Walter Jones once was a conservative, but he’s changed,” says an ad set to run hundreds of times in his coastal North Carolina district and paid for by the Emergency Committee for Israel. “Today he’s the most liberal Republican in Congress.”

One of Jones’ sins, according to ECI,  a group co-founded by neoconservative journalist William Kristol in 2010, is accepting the endorsement of J Street, the dovish Israel policy group.

“It seems like every time they make an ad there’s a mushroom cloud or a burning American flag,” Kalik said.

ECI’s executive director, Noah Pollak, told JTA that “the point is merely to illustrate that the U.S. and Israel have common enemies who hate us for the same reasons.”

For both J Street and ECI, Jones is an unusual case. He is one of the few Republicans to have been endorsed by J Street, whose liberal Jewish base doesn’t have much common ground with a fierce cultural and fiscal conservative like him. Meanwhile, this is the first time that ECI — which has kept up a drumbeat of criticism of the Obama administration’s Middle East policies — has run ads on TV against a Republican.

“Rep. Jones has embraced the foreign policy views of Barack Obama and the liberal wing of the Democratic Party to such an extent that Congressional Quarterly ranks him the most pro-Obama Republican in the House,” Noah Pollak, ECI’s executive director, said in a statement notifying media of the ad buy, which he says is in the six figures and will air on local TV “hundreds of times” ahead of the May 6 primary.

Kalik said that Jones, not ECI, better represents “the longstanding views of mainstream Republicans going back two GOP administrations as well as American Jews who understand that a two-state solution is in Israel’s interest.”

But it’s not just ECI that has it in for Jones: Also targeting the 20-year incumbent and backing Taylor Griffin, his opponent in the May 6 Republican primary, are major Wall Street Republicans appalled at Jones’ backing for restoration of Glass-Steagall and other banking regulations, as well as a Republican leadership weary with him needling the party’s establishment since the mid-2000s, when he became one of the most outspoken lawmakers opposing the Iraq War.

“No one will be sorry to see him go,” said an aide to the Republican leadership in Congress, who spoke on condition of anonymity because of the sensitivity of criticizing an incumbent. After the 2012 election, in which Republicans suffered losses blamed on hardline conservatives, Jones was among a handful of lawmakers the GOP leadership removed from key committees, citing their “obstinacy.”

Jones is something of an anomaly this electoral season: The establishment is much likelier to be defending incumbents against challenges from the Tea Party. But in Jones’ case, the establishment is coming down hard on an incumbent outlier with strong conservative credentials and in favor of a more establishment candidate, Griffin, 38, who worked in President George W. Bush’s Treasury Department and later in financial services lobbying.

The Republican Jewish Coalition is backing Griffin in the primary.

“We discussed this at our board meeting in Las Vegas and made a relatively unprecedented decision in a significant way,” the RJC’s executive director, Matthew Brooks, told JTA, referring to his group’s annual gathering at the end of March. “We’re going to max out via our leaders and our political action committee. This is an important race, and it sends a signal for us to get involved in an intra-party primary.”

Brooks said the RJC’s affiliated PAC would cut a $5,000 check for Griffin this week, the maximum for a primary fight. He could recall only two previous occasions when the RJC involved itself in a primary, and never against an incumbent.

Unseating Jones will not be easy, said Andrew Taylor, a professor of American politics at North Carolina State University. Others have tried since Jones turned against the Iraq War and have not succeeded.

“In eastern North Carolina, the, Jones family is very well known and respected,” Taylor said, noting that Jones, 71, has served since 1995 and that his father — also Walter Jones — served in the House for decades as a conservative Democrat. “There are number of people who are uncomfortable with his positions on Iraq and Iran, but their inclination would be to say, ‘That’s Walter.’”

Jones, in fact, was initially one of the most prominent Iraq war boosters — he got French fries renamed “freedom fries” on congressional menus in 2003 because the French refused to back the U.S. invasion.

His district includes a major Marine Corps base, Camp Lejeune, and he has said his visits with families who lost loved ones helped turn him against the war. Jones and Griffin did not respond to requests for interviews.

The ECI ad cites a 2012 National Journal ranking of Jones as the most liberal House Republican.

While Jones has not followed the party line on a number of issues, the American Conservative Union last year classified him among its “ACU conservatives,” lawmakers who earned a rating of 80 percent or more. Red State, an influential conservative blog, named him as one of 16 members of the “Conservative Fight Club” for voting against preventing the government from shutting down in March 2013. He was among conservatives who last October voted against reopening the government three weeks after it shut down.

He voted last year for a bill that would ban abortions 20 weeks after conception.

Last year, Jones railed against a local community college that used federal money to buy 25 books on Islam, saying the money would be better spent on tamping down the U.S. debt to China and calling on the college to “give equal exposure to books about Christianity and America’s rich Judeo-Christian heritage.”

Walter also has a libertarian bent and is close to Ron Paul, the maverick retired House member from Texas whose senator son, Rand Paul of Kentucky, is among the frontrunners for the GOP 2016 presidential nod. The elder Paul was unabashed in his criticism of Israel, and his son, though more circumspect, opposes U.S. financial assistance to the Jewish state as well as all other foreign aid.

Jones backed Ron Paul’s 2008 and 2012 presidential runs. He is currently one of 18 advisers to the Ron Paul Institute.

“At a time when the national debt has reached over $17 trillion, the United States cannot afford to continue to funnel millions of dollars overseas in the form of foreign aid — especially when that aid is comprised of money we ourselves have borrowed from foreign governments like Russia and China,” Jones said in an April 2 statement.

J Street said that it was aware of Jones’ association with Paul.

“Walter Jones and Ron Paul share a lot of views on issues not related to our work,” said J Street spokeswoman Jessica Rosenblum. “Walter Jones has a legislative record that speaks to his commitment to Israel’s security, part and parcel of which is support for a two-state solution.”

“He is very much a pro-Israel member of Congress,” he said.

ECI, in its ad, notes that Jones in 2012 was the sole Republican abstaining on the “U.S.-Israel Enhanced Security Act,” which would have established even closer military relationships between the two nations. The bill passed overwhelmingly, 411-2, with nine abstaining. The only other Republican not voting in favor was Ron Paul, who voted against.

The ad also notes Jones’ vote against a 2012 Iran sanctions bill, which passed overwhelmingly with only five House Republicans and one Democrat opposed.

J Street has struggled to assemble a bipartisan congressional slate to back.

Its political action committee won the agreement of a couple of Republicans in Congress to accept its endorsement at its outset in 2009, but they bolted a year or so later, when it became known that J Street had concealed its fiduciary relationship with liberal billionaire George Soros. For a few years, the group’s endorsees were solely Democratic.

This cycle, for the first time since 2010, J Street is endorsing two Republicans: Jones and Rep. Ed Whitfield of Kentucky.