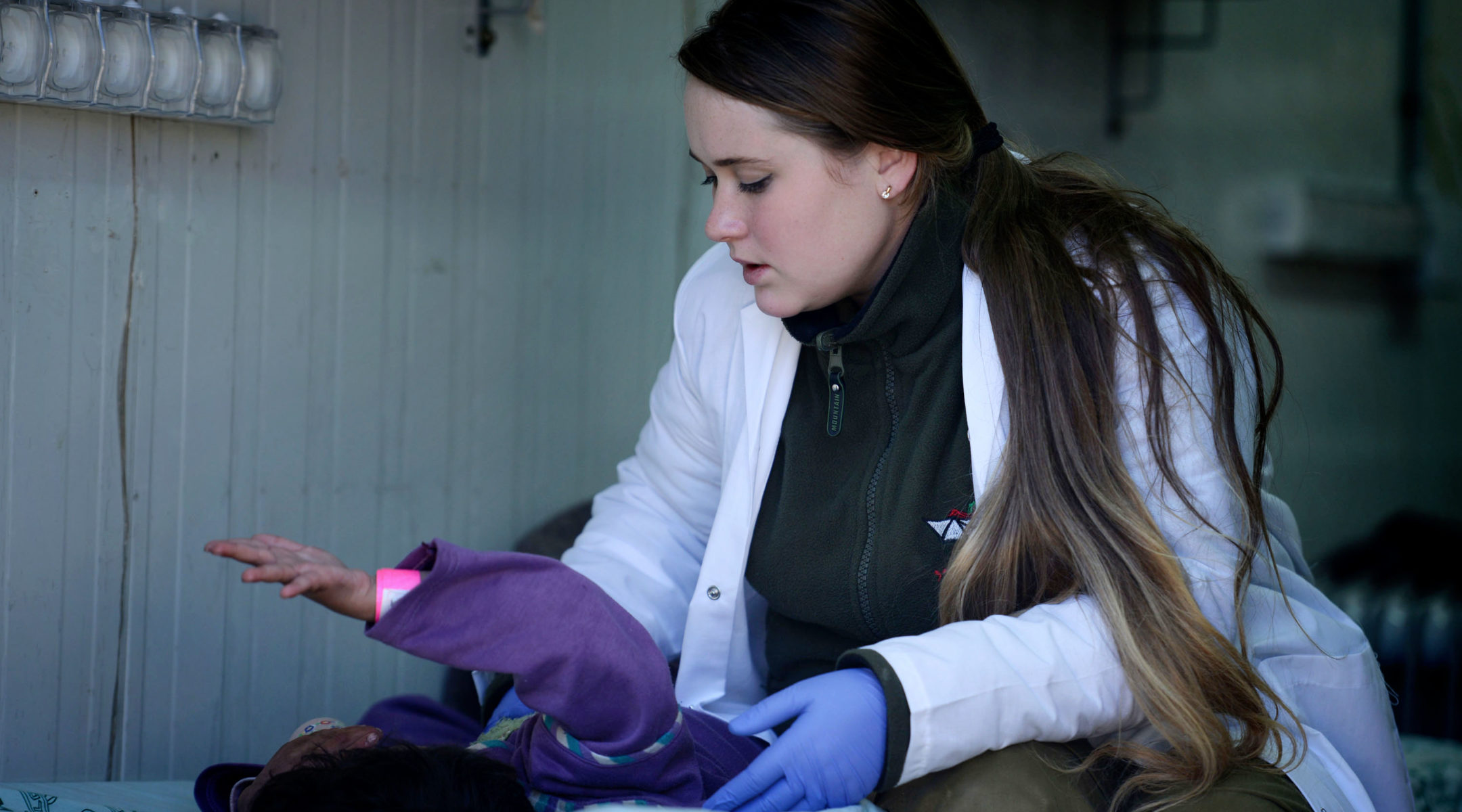 A medical worker at a field hospital in the Golan Heights in February treats wounded individuals from the Syrian civil war. (Kobi Gideon /GPO/FLASH90)
Advertisement

SAFED, Israel (JTA) — When an Israeli army ambulance brought an injured Syrian man to Ziv Medical Center in this northern Israeli city two months ago, the doctors didn’t know where exactly he was from.

They saw that his leg had been amputated, and based on his own fragmented account and the physical evidence, the doctors surmised he had been hit by a shell.

But they didn’t know exactly how he had gotten there. And when he leaves the hospital later this month, they don’t know where he’s going.

“I’m not scared,” said the Syrian, whose name was withheld by the hospital because Israel and Syria are in a state of war. “Nothing worse will happen to me, so who cares if I’m in Israel?”

Despite decades of hostility between Israel and Syria, hundreds of victims of Syria’s 3-year-old civil war have received life-saving treatments in Israeli hospitals. Israeli medical personnel say that while they’re happy to treat Syrians, the wounded pose a unique set of challenges.

For one, their injuries are often complex, owing to the heavy artillery used in the conflict. They sometimes arrive at the hospital as much as days after suffering the injury, complicating treatment. And the wounded often are wary of Israelis they have been taught to despise, making it hard for Israel to address their emotional traumas in addition to their physical ones.

“As nurses, it’s unique to deal with wounded like this,” said Refaat Sharf, a nurse at Ziv, which has treated 162 Syrian patients. “We hadn’t been used to these injuries, neither in terms of their character nor their frequency.”

Since last year, more than 700 wounded Syrians have come to Israeli hospitals via the Syria-Israel border crossing on the Golan Heights. The Israel Defense Forces has set up a field hospital there, and transfers patients it cannot care for to nearby hospitals. In some cases it brings a family member as well.

Northern Israel’s hospitals have extensive experience dealing with patients wounded in battle — most recently during Israel’s 2006 war with the Lebanese terrorist group Hezbollah. But in that conflict, the wounded typically received medical attention rather quickly.

Joseph Guilbard, the director of pediatric neurosurgery at the Rambam Medical Center in Haifa, recalled an especially severe case in which a 12-year-old Syrian boy arrived in a deep coma with a severe brain injury. Guilbard performed multiple surgeries, reducing excessive pressure on the brain, removing parts of his skull and replacing them with acrylic. When he was discharged, the boy was walking.

“If you see yourself as a doctor, a surgeon and a trauma specialist, you give the same treatment to everyone,” said Hany Bathoth, the director of the trauma unit at Rambam. “In every trauma, that’s how it is. You feel like you helped the injured. That gives you strength.”

Hospital personnel tasked with providing emotional support say Syrians are reticent to open up about their experiences. Besides the trauma of war, there is the additional fear of being in an enemy state. Israeli Arabs who share a language and certain cultural norms with the wounded are employed at all levels at Ziv and Rambam and say they help Syrian patients navigate the cultural gaps they encounter.

“If you want to talk about respect for men and women, [a male Syrian patient] can’t see a woman, say hi to a woman,” said Johnny Khbeis, an Israeli Arab who works as a medical clown at Ziv. “There are women who change their sheets, and that’s hard for them because that doesn’t happen there.”

Adi Pachter-Alt, Rambam’s deputy director of social work, said the patients’ reluctance to speak openly about their feelings comes more from the trauma of being injured and less from ill will toward Israel.

“It’s hard for us to give overall emotional support because they mistrust us,” Pachter-Alt said. “It’s not due to the state of war. It’s because you’re in a different state after trauma. You’re very alone, very suspicious.”

Medical personnel said that when they do leave the hospital, Syrians are grateful for the care they received. The Syrian patient in Ziv said his opinion of Israel had flipped during his stay there.

“Before the revolt, the authorities told us Israel was the enemy and we must fight them,” he said. “But after the recent events there, I saw that in Israel they take care of the patients. All of the Israelis I met, Arabs and Jews, seemed unified.”