From three countries, a family reconnects 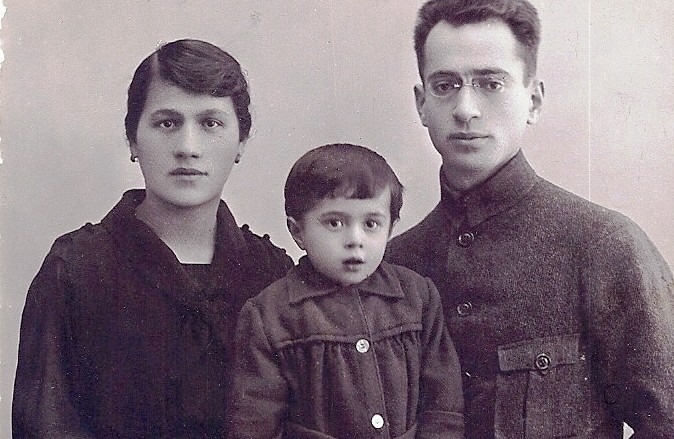 Mendel Eidlitz with his wife, Chasia, and one of their daughters, Sima; all three, along with another daughter, were killed at Ponari, a forest near their native Vilna. (Courtesy Rivka Gurvitz)
Advertisement 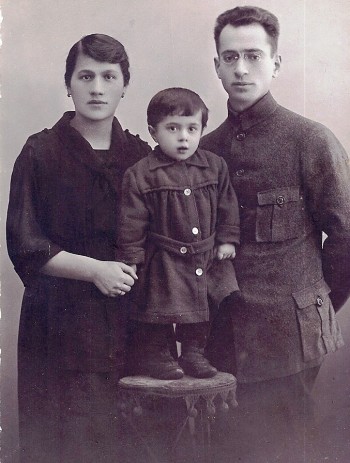 Mendel Eidlitz with his wife, Chasia, and one of their daughters, Sima; all three, along with another daughter, were killed at Ponari, a forest near their native Vilna. (Courtesy Rivka Gurvitz)

BALTIMORE (JTA) — Serving in the early 2000s as an emissary in Kiev for the Israeli government and the Jewish Agency for Israel, Maksim Gur never dreamt he had a relative living in Ukraine.

Gur heard  just a few weeks ago from Polina Gavriluk of Kostopil, a town in western Ukraine 220 miles from the capital city, after she conducted research on the website of Yad Vashem, Israel’s central Holocaust commemoration institution.

They are second cousins — their grandfathers were brothers.

Having found one another, they quickly set out to locate the descendants of Charna Brier, another of their grandfathers’ siblings. Brier and her parents had settled in the United States long before the start of World War II, and she became known as Sylvia.

Yad Vashem requested the assistance of “Seeking Kin,” which the next day found Brier’s son, Joseph, living in New York, and reunited the three branches of the family.

The key to reunifying Gur and Gavriluk was a “page of testimony,” a form filled out at Yad Vashem in 1983 by Rivkah Gurvitz attesting to the July 1941 murder of her father, Mendel Eidlicz, at the Ponari forest outside Vilna, the Lithuanian city where the extended family lived.

Gavriluk’s grandfather was Eidlicz’s brother, Moshe, who was killed on June 26, 1944, while fighting with the Russian army in present-day Belarus.

Gurvitz had signed the Yad Vashem form and listed her Jerusalem address, and Gavriluk called her there. Now 90 and suffering from Parkinson’s disease, Gurvitz was unable to speak with Gavriluk, but her son, Maksim, and daughter, Ahuva Stav, did.

When the Nazis entered Vilna in June 1941, Gur told “Seeking Kin” last week, Mendel was arrested as a municipal worker “and not because he was Jewish.” His wife, Chasia, and three daughters — Sima, Rivka and Miriam — were among the Jews soon incarcerated in the Vilna ghetto. The four were murdered at Ponari, but Rivka happened to be elsewhere in the ghetto when her street’s occupants were marched to their deaths.

She would escape to the forests and serve in a unit of partisans prior to the Soviets’ liberation of the area in 1944, married another Vilna native in 1946 and moved to Israel in 1958.

Gavriluk, writing in an email from Kostopil, told “Seeking Kin” that she recently found five letters that Moshe had sent his wife, Pesia, from the front. With no photographs in existence, the letters “are all we have from him,” she said, and reading them “touched my heart.”

“He wrote about his brother Mendel, and he dreamed to find [him] and his family after the war,” she wrote. “I felt that my grandfather would like me to try to find [them].”

Researching the 1940 U.S. census, she saw documentation for Sylvia Brier, her husband, Jacob, and their son, Joseph, but didn’t know what became of them. “Seeking Kin,” starting with the assumption that Joseph, then age 5, still lived in his native New York, searched on WhitePages.com and immediately found him. 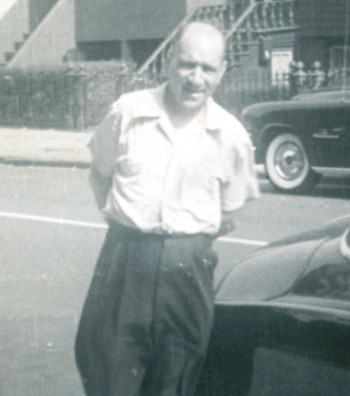 Harry Eidlitz is shown on a 1953 visit to Brooklyn, N.Y., to see his sister, Sylvia Brier. (Courtesy Joseph Brier)

Brier, 79, a resident of Suffern, a New York City suburb, was understandably surprised to learn he had kin in Ukraine and Israel.

An only child, Brier grew up with few relatives — the most central being his maternal grandparents, Tobias (formerly called Tuvia) and Malka Eidlitz, the surname being slightly varied from the one Rivka Gurvitz had submitted to Yad Vashem.

His parents worked long hours at their housewares store, Brier recalled, so his grandparents, who spoke only Yiddish and lived steps away across Lafayette Avenue in Brooklyn’s Bedford-Stuyvesant neighborhood, helped raise him.

The information Brier had gleaned from conversations with Malka, and from being raised in America, will doubtless be a huge surprise to his “new” relatives.

Gavriluk knew only that in addition to Mendel and Sylvia, her grandfather had a brother and sister, and through Yad Vashem learned that the three siblings had two other brothers, Reuven and Yaakov, both murdered in the Holocaust. But the clan was larger than those five children — much larger.

“My grandmother told me she had 14 children and that eight were killed in the Holocaust,” Brier said.

One of the 14 was Harry, also known as Hymie, who survived the Holocaust and settled in Toronto with his wife, Sonia; they had a son, Arnie. Two other sons of Tobias and Malka, whose names Brier does not recall, also survived and moved to Buenos Aires, Argentina, where they worked as civil engineers. They visited Brooklyn in the 1940s, but he never saw them again.

Tobias died in April 1946, and Malka almost exactly 10 years later, and are buried in New Jersey. If Gur or Gavriluk were to visit the United States, Brier said, he’d meet them and take them to the graves of their great-grandparents. But they are now all strangers to him, he said.

“We have a common background, but we have not seen each other,” Brier said.

Berman said 4.3 million names of the estimated 6 million Jewish Holocaust victims are recorded in the project’s database, and with fewer and fewer survivors remaining, the effort to account for all the victims is in “the 11th hour.”

“We hope that stories like [the Eidlicz family] inspire people to search the names’ database,” she said. “Yom Hashoah ceremonies are a very good occasion for people to check and double-check the names [there], and make additions and corrections … so they’re not forgotten forever.”