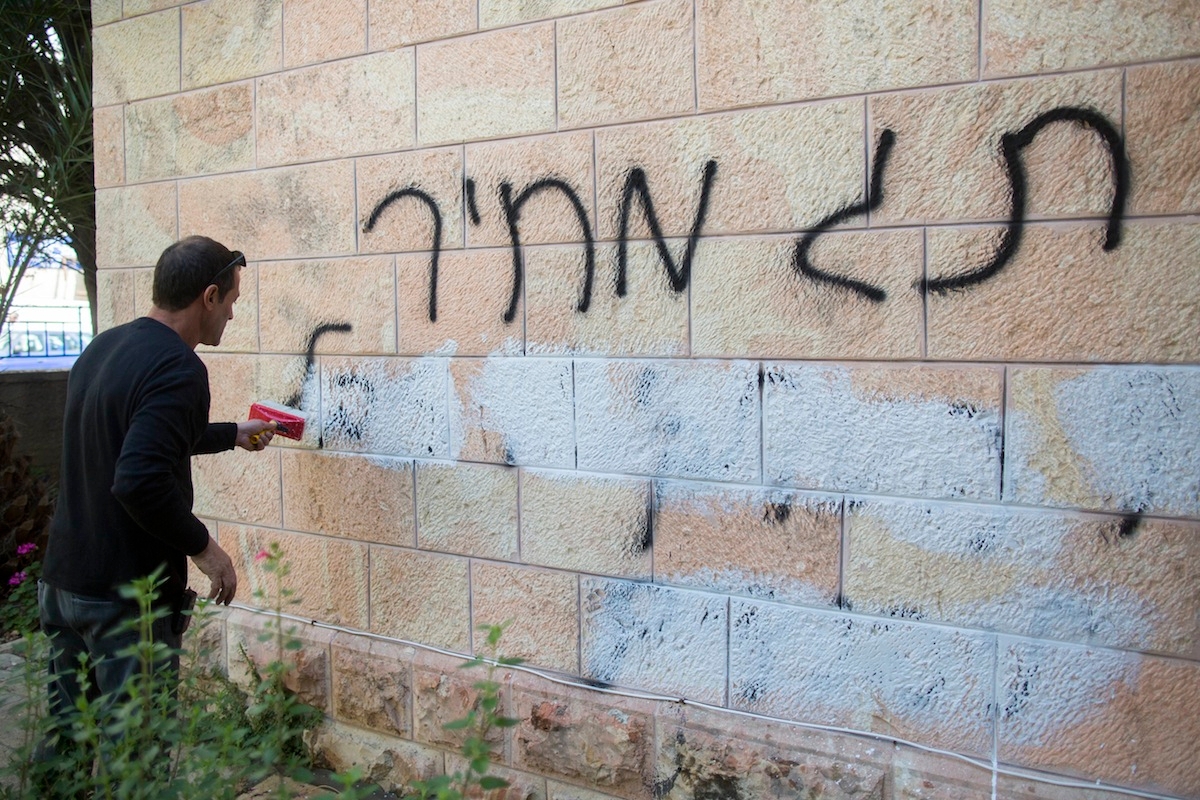 So-called “price tag” attacks have proliferated since Israeli-Palestinian peace talks were suspended at the end of April.

Intended to exact a price for Israeli government policies seen as detrimental to the settlement enterprise, such attacks have long been a problem in the West Bank. But suspected Jewish extremists increasingly are targeting Israeli Arab citizens, mosques and churches within the country’s borders.

Israel’s government has been left in the awkward position of confronting a string of ideologically motivated attacks perpetrated by Jews. Now calls are growing for the government to mount a stronger response.

The latest attacks come at a particularly sensitive time — just weeks before Pope Francis is due to make a high-profile visit to Israel. Anti-Christian graffiti has prompted the Vatican to express concern for the safety of Israel’s Christians.

“What began as love of the land has become, in part, a wild west sown with hate toward Arabs, the state of laws and its representatives,” Justice Minister Tzipi Livni wrote in a Facebook post May 7.

Protesters in Jerusalem calling on the Israeli government to take action against so-called “price tag” attacks, May 11, 2014. (Yonatan Sindel/Flash90)

Attackers have slashed the tires of Arab-owned cars in the Israeli towns of Yokneam, Acre and Fureidis. Graffiti reading “Death to Arabs” was sprayed in Yokneam and eastern Jerusalem. On Friday, Jerusalem’s St. George Romanian Orthodox Church was defaced with the words “Price tag, King David is for the Jews, Jesus is garbage.”

Even Jewish and Israeli Defense Forces institutions are not immune. On Monday, vandals reportedly defaced an Israeli army base with slogans demeaning the pope and Arabs. The same day, swastikas inside Jewish stars were found outside Jerusalem’s Conservative Moreshet Yisrael synagogue.

Israeli security forces have responded as they have since the price tag attacks began in 2008 — with investigations and arrests.

Amos Oz, one of Israel’s leading literary figures and a stalwart of the left, likened price tag perpetrators to neo-Nazis in a nationally televised speech on Friday in honor of his 75th birthday.

“ ‘Price tag’ and ‘hilltop youth’ are sweet, sugary nicknames, and the time has come to call this monster by its name,” Oz said. “We wanted to be like all other nations, we longed for there to be a Hebrew thief and a Hebrew prostitute — and there are Hebrew neo-Nazi groups.”

Reuven Rivlin, a Likud Knesset member and former Knesset speaker who was present for the speech, called it “a cheapening of the Holocaust.” The Samaria Residents’ Committee, a West Bank settlers’ advocacy group, filed a police complaint accusing Oz of incitement to racism.

The former head of counterterrorism operations in Netanyahu’s office, Nitzan Nuriel, told JTA that continued price tag incidents could lead to a bloody backlash from Palestinians, either against the attackers themselves or other Jewish targets.

Last week, in an apparent response to the price tag attacks, graffiti was found in northern Israel on the tomb of Abba Halafta, a second-century rabbi, reading “Tag will pay a price.”

Nuriel called for a preemptive approach to the price tag attacks, similar to how Israel deals with Palestinian terror groups.

“We need to frustrate it, to cause it not to happen,” said Nuriel, now a research associate at the Interdisciplinary Center Herzliya’s International Institute for Counter-Terrorism. “We need to act against it with more determination, to set rules.”

Some Israeli media have taken to calling the attacks hate crimes, but Hebrew University political sociology lecturer Eitan Alimi said the definition obscures the political element in the attacks. The hateful language is a means of protest, Alimi said, not an end in itself.

“There’s no doubt that the price tag phenomenon is very influenced by political processes,” Alimi said. “I’m not sure these are primarily hate crimes. They’re violent acts with political logic and political goals.”

While government officials decide on how best to respond, a group of civilians has attempted to help the attacked communities heal. Founded in 2011 and called Light Tag, the coalition of activists from a range of left-wing and pluralist nonprofits has visited places where attacks took place to meet with community leaders and offer emotional support.

On Sunday, Light Tag organized a protest opposite Netanyahu’s residence in which it invoked guarantees of tolerance in Israel’s Declaration of Independence. Gadi Gvaryahu, Light Tag’s chairman, noted that price tag attacks have included attempts to burn down mosques and feared they could lead to deaths if not curbed.

“A Jewish state cannot allow itself, based on Jewish beliefs, to burn down a mosque,” Gvaryahu said. “People think that price tag is just graffiti. It’s not just graffiti. They hurt people.”