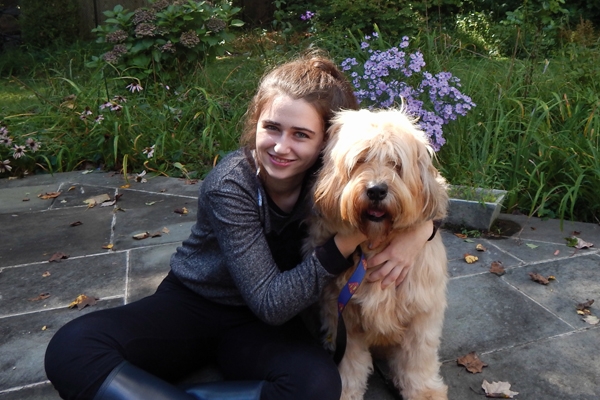 WASHINGTON (JTA) — Annie Blumenfeld’s joy from adopting her dog Teddy was short-lived after she discovered he was infected with heartworm disease.

Transmitted through the bite of a mosquito, heartworm disease passes through the bloodstream and takes up residence in a dog’s heart and lungs. If left untreated, the disease will progress, damaging the organs and eventually causing death. While it is preventable, an estimated 45 percent of dogs in the United States are left unprotected.

To fight heartworm disease, Teddy received injections of arsenic, was confined to a crate for nearly two months and subjected to multiple trips to the veterinarian.

Blumenfeld soon discovered that preventing the disease, accomplished by administering a monthly pill, is easier than curing it.

“How to take care of a pet after you rescue them is not something that’s publicized,” she said.

So the 16-year-old decided to embark on an awareness campaign about heartworm disease and its prevention.

Two years ago she started Wags 4 Hope, a nonprofit through which she sells her own original paintings of cats and dogs, donating the proceeds to animal shelters and rescue groups. Blumenfeld said she has raised nearly $15,000 from approximately 230 paintings.

A sophomore at Fairfield Warde High School in Fairfield, Conn., Blumenfeld speaks at local libraries to younger children about responsible pet care and started a Wags 4 Hope club at her school that has made blankets for a local animal shelter and raised $2,000.

She testified recently in the Connecticut State Legislature on behalf of a bill that would raise awareness of heartworm disease prevention throughout the state.

“I realized I should share my story,” Blumenfeld said. “And I didn’t want any other pet owner to experience with their dog what we went through with Teddy.”

Today, she said, Teddy is “very bouncy and always wagging his tail” and is expected to live “a nice happy, healthy long life.”

Blumenfeld shared with JTA the shaggy friend who’s been her biggest influence, the television personality whom she’d like to meet and her advice to other teens interested in starting a nonprofit.

JTA: Who or what have been the biggest influences in your life so far?

Blumenfeld: I would have to say it’s my dog. My parents have been really great, too.

If you could have lunch or coffee with anyone and tell him or her about Wags 4 Hope, who would it be?

Jill Rappaport. I love the rescue work that she does on her segments for NBC’s “Today Show.”

A little over three years ago, I went to the Maccabi Games with my brother. He played for the soccer team. It was a lot of fun to meet Jewish families in Australia.

What do you think you want to be doing when you “grow up”?

Obviously, my paintings. I also like doing schoolwork; English and global studies are my favorite classes.

What advice would you give to other teens interested in starting a nonprofit?

Find an issue that you’re passionate about and have a personal connection to, but it doesn’t have to be a glamorous issue. If you really run with it, it will take you far.