Rabbi Jonathan Sacks: Religious liberty’s under threat — on both sides of the pond 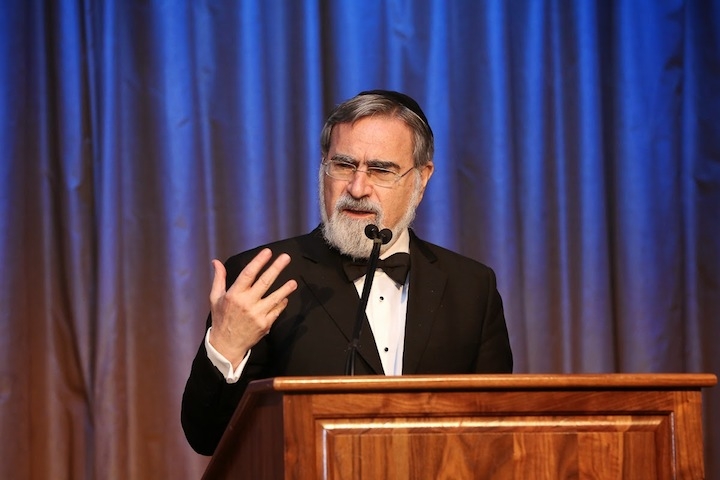 Rabbi Jonathan Sacks, the former British chief rabbi, addressed a gala dinner hosted by the Becket Fund for Religious Liberty in New York on May 15, 2014. (Courtesy of the Becket Fund)
Advertisement

Rabbi Jonathan Sacks was praised by a Catholic cardinal and then blessed by a Mormon apostle.

The former British chief rabbi was being honored by the Becket Fund for Religious Liberty, a Washington-based public interest law firm that’s been busy representing clients — such as Hobby Lobby — who say their religious freedoms are being trampled by the government.

The crowd gathered last week at Manhattan’s Pierre hotel may not have shared a dogma — one could spot yarmulkes, Sikh turbans, clerical collars and nuns’ habits in the room — but they did have a common concern. And Sacks made clear that he shared that concern.

“Today, I’m sad to say that that liberty is at risk throughout Europe,” he said in his keynote speech, during which he accepted the Becket Fund’s Canterbury Medal.

In Britain, we have seen a worker banned from wearing a small crucifix at work. A nurse was censured for offering to utter a prayer on behalf of one of her patients. The Catholic adoption agencies were forced to close because they were unwilling to place children for adoption to same-sex parents. And as far as Judaism is concerned, religious liberty has been under very serious threat indeed. We have seen shechitah — the Jewish way of killing animals — banned in Denmark. We have seen circumcision banned by a court in Germany. These are liberties Jews have enjoyed throughout Europe for centuries. And this is for me the empirical proof that this deeply secularizing Europe, that the secular societies in Europe are much less tolerant than the religions that they accuse of intolerance.

Sacks noted that the threat from what he called “political correctness” also extended to America.

“Look at what has happened in this country to people merely because they oppose same-sex marriage, or they gave a donation to a body that opposed same -sex marriage,” he said, an apparent reference to the controversy that last month forced the resignation of the newly appointed chief of the Internet company Mozilla.

Sacks recently finished his tenure as chief rabbi and moved across the pond to teach at NYU and Yeshiva University. In Britain, Sacks had used his pulpit and erudition to establish himself as one of the country’s leading public intellectuals, a widely respected voice on issues related to religion and society.

From his reception at the Becket Fund, it was clear that he had garnered some admirers on these shores as well. In his brief speech, New York’s Cardinal Timothy Dolan praised Sacks: “I don’t know of a man who understands the theology of Pope Benedict XVI more than you do.”

Later, Sacks was blessed by D. Todd Christofferson, an member of the Quorum of the Twelve Apostles of the Church of Jesus Christ of Latter-day Saints, who hailed the rabbi’s work as he offered the event’s closing prayer.