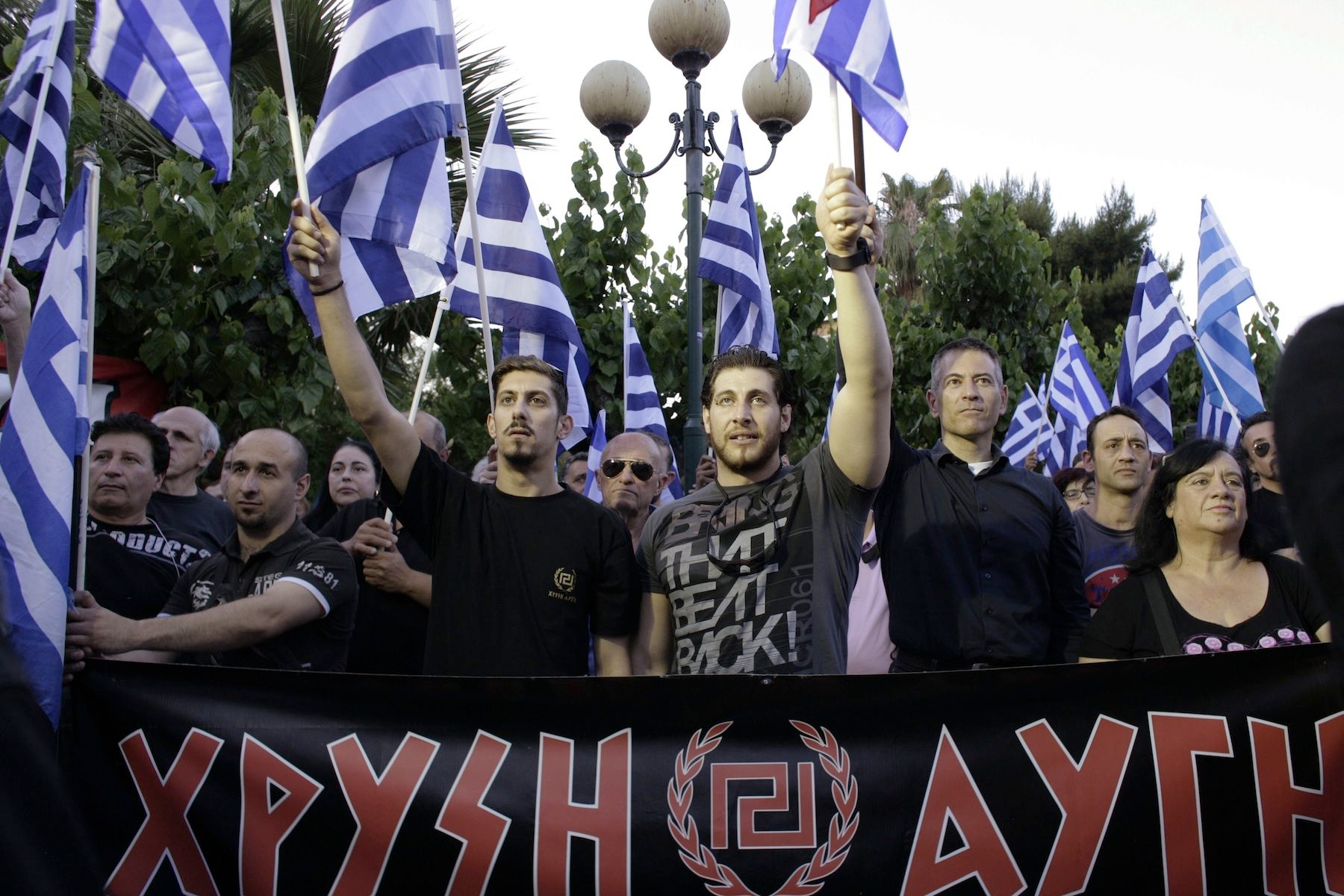 ATHENS, Greece (JTA) — The picture of Golden Dawn leaders being led away in shackles by masked policemen last September was supposed to be a defining image: Greek authorities cracking down on the country’s neo-Nazi party as a harbinger of its demise.

Instead, soon there will be a new iconic image: three members of the party taking their seats in the European Parliament.

Golden Dawn — supposedly persecuted, prosecuted and in tatters – made substantial gains over the weekend in European elections, capturing 9.4 percent of the popular vote to emerge as the third-largest political party in Greece. Leaders of the party, which won 7 percent of the vote in the 2012 national elections, hailed the weekend vote as a clear triumph.

“We are the third political power in Greece,” jailed Golden Dawn leader Nikolaos Michaloliakos wrote in a message to his followers. “We are the upcoming Greece.”

For Golden Dawn’s opponents, including the small Jewish community in Greece, the election was deeply frustrating, signaling the apparent failure of Prime Minister Antonis Samaras’ strategy for dealing with ultranationalist party.

“It is a vote that makes us very uncomfortable,” said David Saltiel, the president of the Jewish community in Thessaloniki, the second-largest city in Greece. “I think the Greek government needs to find ways to explain to the voters that the Golden Dawn is a Nazi party of killers.”

For the embattled Greek government, already struggling to pull the country out of a massive economic crisis amid a harsh austerity regime imposed by Europe, the vote is another blow. Samaras’ center-right New Democracy party, fearful of alienating the right wing of the party, until now has balked at outlawing Golden Dawn or bringing a tough anti-racism bill to parliament.

Instead, the government went after Golden Dawn in the courts, arresting most of its lawmakers. Six were jailed and stripped of their political immunity and state funding.

Samaras had been forced to act following widespread outrage and protests in Greece in the wake of the Sept. 18 killing of anti-fascist rapper Killah P by a suspected Golden Dawn member. Party members also have been accused of being behind dozens of violent attacks on immigrants in Greece.

Prosecutors have said the party, with its Nazi swastika-like flag and Holocaust-denying leadership, has a structured organization that operates along military lines and is inspired by the ideals of National Socialism.

Some of the leaders since have been released on bail while others await their trials. No dates have been set; Greece’s legal system often operates extremely slow.

Much of the government’s credibility with the public evaporated in April when a top aide to Samaras was forced to resign following the release of a video that appeared to show him telling Golden Dawn lawmakers that the government was only pressuring the courts to jail party members in order to stem the loss of New Democracy votes.

Golden Dawn spokesman Ilias Kasidiaris released the video during a parliamentary debate on lifting his immunity.

The elections for European Parliament, the EU’s legislative branch, also have undermined the Greek government’s central tenet — that exposing Golden Dawn members for what they are would drain them of support.

This was clearly a fallacy, said Victor Eliezer, the secretary general of the Central Board of Jewish Communities in Greece.

For Greek Jews, the question remains of what can be done?

Some, like Saltiel, believe that only by tackling the underlying problems that affect Greece can they truly deal with Golden Dawn. A recent survey by the Anti-Defamation League showed that Greece has Europe’s highest rate of anti-Semitic viewpoints, with 69 percent of Greeks espousing anti-Semitic views. That’s nearly twice the rate as the next highest country, France, where the rate was 37 percent.

“Golden Dawn is a symptom of the sickness,” Saltiel said.

RELATED: Why is Greece the most anti-Semitic country in Europe?

Some of Golden Dawn’s support comes from the role it has played in filling a vacuum created by the economic crisis.

While the government has slashed salaries and pensions, and unemployment soared to nearly 30 percent, Golden Dawn has stepped up by distributing food, medicine and other supplies to ethnic Greeks and providing security patrols in predominantly immigrant neighborhoods. Some of the patrols have resulted in violence against immigrants. Greece has seen a huge influx of immigrants in recent years who have used the country as a gateway to the rest of Europe.

“I think the government has to work to see the real problems of the people and see why people are voting for this extremist Nazi party,” Saltiel said.

Greek authorities have not said what their next steps will be, except for a brief statement from government spokesman Simos Kedikoglou reiterating that the government needs to do a better job explaining the dangers of Golden Dawn.

Others say it’s time that neo-Nazi extremism is addressed on a wider level. They point not just to the far-right surge in the European Parliament elections but to an uptick in extremist violence across Europe – including Saturday’s attack at the Brussels Jewish museum that left four dead.

“European leaders must address this problem urgently and come up with a strategy to fight extremism,” said Ronald Lauder, president of the World Jewish Congress.

Lauder said he wants European leaders to find a “credible plan” to combat the problem.

“The future of European Jewry is at stake if these forces are not reined in,” he said.