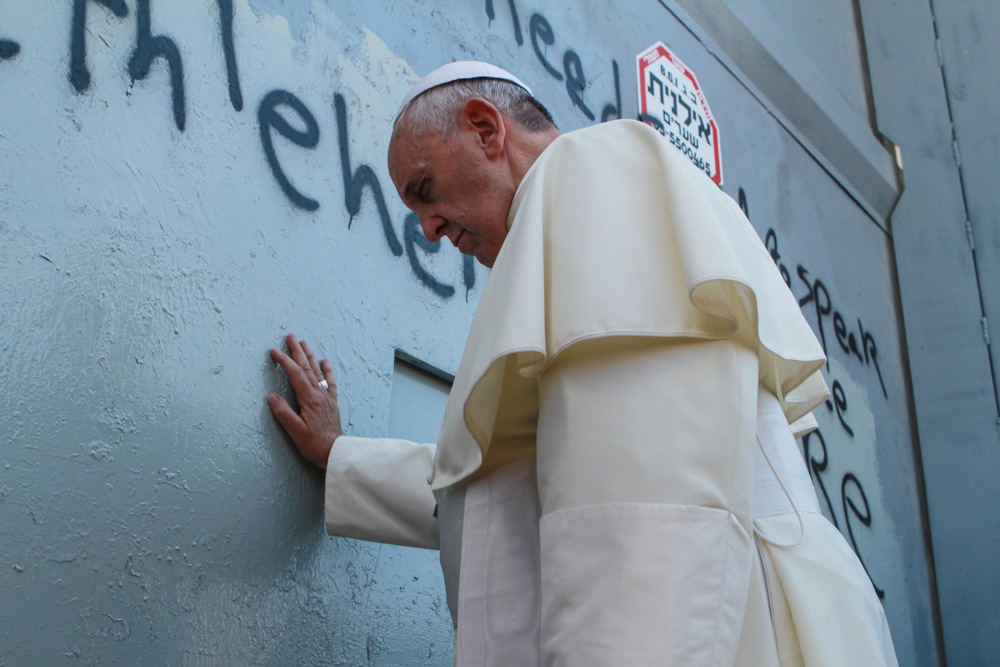 Pope Francis touching the wall that separates Israel from the West Bank on his way to celebrate a mass in Manger Square in Bethlehem, May 25, 2014. (Nour Shamaly/POOL/Flash90)
Advertisement 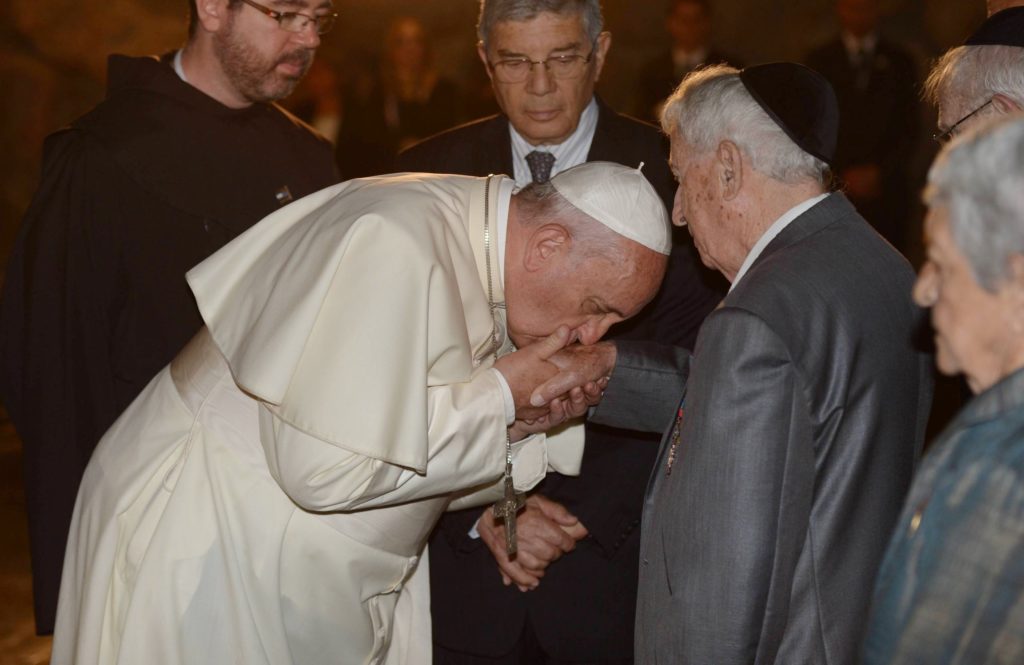 Pope Francis kissing the hand of a Holocaust survivor at the Yad Vashem Holocaust Memorial museum in Jerusalem, May 26, 2014. (Amos Ben Gershom/GPO/FLASH90)

JERUSALEM (JTA) — Perhaps the most lasting image from Pope Francis’ trip to Israel and the West Bank will be the pontiff praying, eyes closed, with his head against a wall.

It wasn’t the Western Wall in Jerusalem, Judaism’s holiest site and a necessary stop for visiting dignitaries. It was Israel’s security fence in the West Bank city of Bethlehem.

Francis, who has made tolerance a theme since becoming pope last year, aimed to bring a message of peace when he visited Israel, the West Bank and Jordan over the weekend. But the Israeli-Palestinian conflict loomed over his visit as leaders on both sides aimed to present him with their narrative of the conflict.

Palestinian Authority President Mahmoud Abbas asked Francis in a speech for help in “bringing the Israeli occupation to a complete end.” Palestinian authorities then took the pope to a walled segment of Israel’s West Bank security fence, where he prayed near graffiti comparing the wall to the Warsaw Ghetto.

Prime Minister Benjamin Netanyahu told the pope that barriers were erected to protect civilians, and at the Israeli leader’s request, Francis made an unscheduled stop Monday at a memorial for terror victims during an already packed itinerary.

“We don’t teach our children to plant bombs,” Netanyahu said, standing alongside the pope at the memorial. “We teach them peace. But we have to build a wall against those who teach the other side.”

For his part, Francis offered symbolic gestures to both sides. On Sunday, the pope entered the West Bank directly from Jordan rather than stopping first in Israel as previous popes had done, and he referred to the “state of Palestine” in a speech in Bethlehem.

In Israel, he became the first pope to lay a wreath at the grave of Theodor Herzl, the founder of modern Zionism, and made the standard stops at the Western Wall and the Yad Vashem Holocaust memorial. He also invited Abbas and Israeli President Shimon Peres to a prayer summit for peace at the Vatican next month. Both leaders accepted the invitation despite the collapse of Israeli-Palestinian negotiations last month.

“Peacemaking demands first and foremost respect for the dignity and freedom of every human person, which Jews, Christians and Muslims alike believe to be created by God and destined to eternal life,” Francis said in a speech at Peres’ official residence. “This shared conviction enables us resolutely to pursue peaceful solutions to every controversy and conflict.”

The pope began his Mideast sojourn in Jordan on Saturday and traveled to Bethlehem the next morning, where he gave joint speeches with Abbas and led a Mass at the Church of the Nativity, the traditional site of Jesus’ birth.

Francis arrived in Israel later on Sunday and spent the afternoon meeting with his Eastern Orthodox counterpart, Ecumenical Patriarch Bartholomew I, and visiting the Church of the Holy Sepulchre in Jerusalem.

On Monday, he visited the Temple Mount and met with the Muslim grand mufti of Jerusalem. He also met with Peres and Netanyahu, Chief Rabbis Yitzhak Yosef and David Lau, and Western Wall Rabbi Shmuel Rabinowitz.

At Yad Vashem, the pope said in a speech, “A great evil has befallen us, as such that has never occurred,” and referred to the Holocaust by its Hebrew term, Shoah. “Grant us the grace to be ashamed of what men have done, to be ashamed of this massive idolatry.”

Monday afternoon, Francis met with Christian leaders and visited several Christian holy sites, including the Cenacle, regarded by Christians as the site of the Last Supper and by Jews as the tomb of King David. Tensions have risen recently over reports that Israel will allow increased Christian access to the site.

In advance of the pope’s visit, Israeli police arrested 26 people who planned to protest there.

The pope departed for Rome on Monday night.

Pope Francis touching the wall that separates Israel from the West Bank on his way to celebrate a Mass in Manger Square in Bethlehem, May 25, 2014. (Nour Shamaly/POOL/Flash90)

The pope’s trip came 50 years after the first first papal visit to Israel, by Pope Paul VI in 1964. During that trip, Paul VI did not meet with Israeli leaders and did not refer to the State of Israel in his speeches.

Much has changed in the interim. Israel and the Vatican established diplomatic relations in 1994 and Pope Francis offered rich words of praise for Israel’s leaders.

“Mr. President, you know that I pray for you and I know that you are praying for me,” Francis said in his speech at Peres’ residence. “I assure you of my continued prayers for the institutions and the citizens of the State of Israel.”