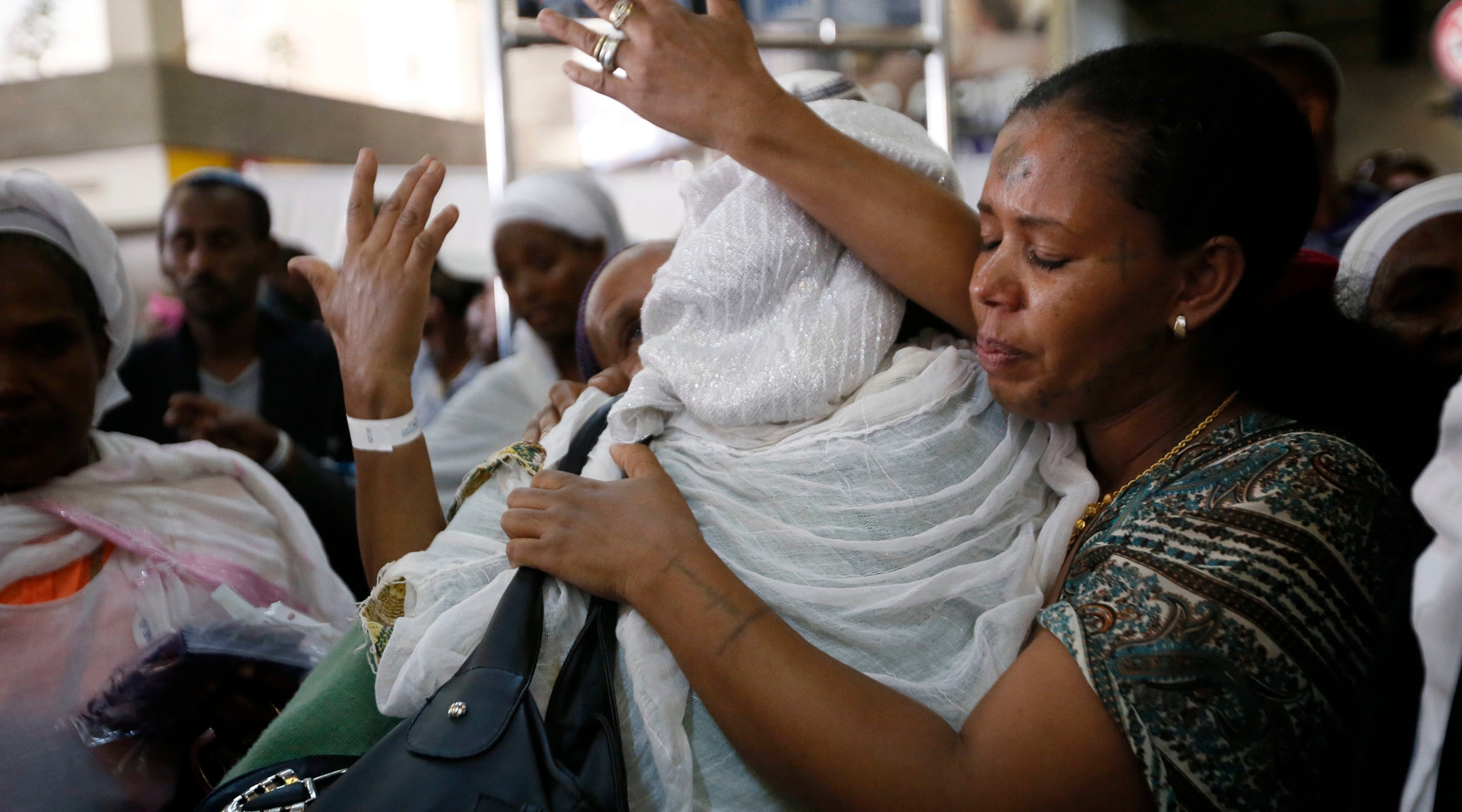 Ethiopian Falash Mura are greeted by family and friends as they arrive at the Ben Gurion airport, outside Tel Aviv on August 28, 2013. (Miriam Alster/Flash 90)
Advertisement

Today, Jews in Jerusalem, Israel and the world over are celebrating Jerusalem Day, a holiday meant to commemorate the reunification of Jerusalem in the Six-Day War.

In Israel, the day has become somewhat controversial. Right-wing politicians often use it to advance political messages, while some on the left demur from the festivities.

But few note that on this date, Israel commemorates another holiday — Memorial Day for Ethiopian Jews Who Died on the Way to Israel.

Established by the Knesset Committee for Immigration, Absorption and the Diaspora in 2003, the holiday was first officially celebrated four years later with the unveiling of a memorial for fallen Ethiopian Jews on Jerusalem’s Mount Herzl.

The day, and the memorial, pay tribute to the dangerous and often lethal journey Ethiopian Jews had to take from Ethiopia through Sudan in the 1980s and early 1990s before being flown into Israel. Israel’s government estimates that 4,000 Ethiopian Jews died en route, from hunger, sickness or violence.

There is, of course, a connection between the two holidays commemorated today. Jerusalem Day was chosen as the Ethiopian Jews’ memorial day because of the longing for Jerusalem that stood at the center of Ethiopian aspirations to move to Israel.

Prime Minister Benjamin Netanyahu and President Shimon Peres attended a candle-lighting ceremony today at the Mount Herzl memorial, which lists the names of the fallen, etched in stone. But otherwise, the holiday is largely considered an afterthought amid the singing and dancing in Israel’s capital.

Ethiopian aliyah to Israel officially ended last year, when the last planeload of Ethiopian Jews landed on the tarmac at Ben-Gurion Airport in August. They join 125,000 Ethiopian Jews settled here, but many challenges remain for Israel and the community. Ethiopian students lag in education, poverty rates are higher among Ethiopian families and anti-Ethiopian discrimination is still common.

But in a Facebook post about today’s ceremony, Immigrant Absorption Minister Sofa Landver wrote that in making a life in Israel the community also has much to be proud of.

“I know that the absorption of Ethiopian immigrants has not yet finished, but even so I see an opportunity to highlight that with the passage of two decades from the start of this immigration, the community has recorded impressive achievements in every aspect of life in the state,” she wrote. “On this day I bow my head in memory of those who did not make it here to realize the dream and vision of thousands of years.”