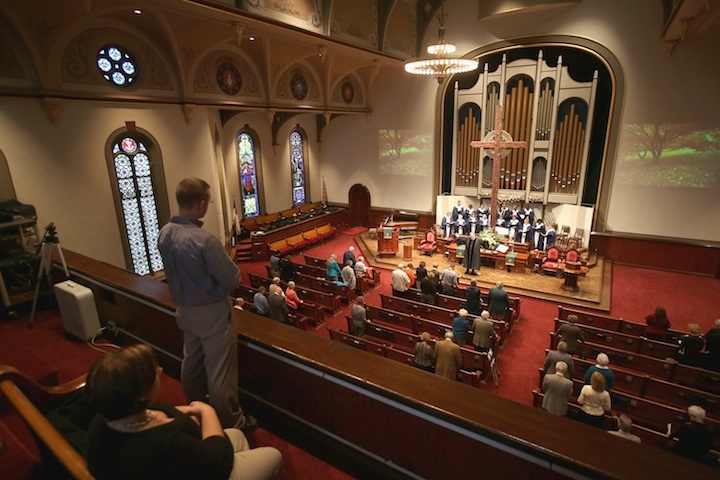 WASHINGTON (JTA) — Which way will Presbyterians go this time?

That’s a question Jewish groups and their Presbyterian allies are nervously asking as they work to head off divestment efforts within the church targeting Israel. The fear is the efforts could pass this time after a narrow defeat two years ago.

A successful divestment vote at the biennial Presbyterian Church (U.S.A.) General Assembly this month could precipitate a rupture between the mainline Protestant denomination and the Jewish community, they warn.

Jewish-Presbyterian relations already were strained severely following the publication by a church-affiliated group of a document, “Zionism Unsettled,” that depicted Zionism as a false theology.

“The publication of ‘Zionism Unsettled’ by the very voices backing divestment in the PC (U.S.A.) revealed an agenda that is not about church investments,” said Ethan Felson, the vice president of the Jewish Council for Public Affairs. “These backers of divestment want to return their church to a place of retrograde anti-Jewish theology, hostility to mainstream Jews and, of course, a blind eye to the responsibility of Hamas and Hezbollah on the Israel-Palestinian conflict and the steps Israelis are forced to take to defend themselves.”

Delegates to the General Assembly, taking place June 14-21 in Detroit, will consider at least five resolutions, or “overtures,” that would advance divestment from companies that deal with Israel’s military and one that would reconsider whether the church supports a two-state solution.

Church officials organizing the assembly declined to comment directly on the resolutions.

At the 2012 church assembly, delegates rejected a divestment initiative by the slimmest of margins, 333-331.

Jewish communal officials and their allies worry that divestment proponents could find success at this year’s Presbyterian assembly.

Since the last assembly, a contingent of conservative Presbyterians have broken away from the denomination over its recent embrace of the ordination of gay clergy. Conservatives are seen as likelier to reject anti-Israel measures.

Meanwhile, divestment proponents are pointing to the collapse of Israeli-Palestinian peace negotiations in their efforts to encourage church members to back divestment.

“Part of what this is about is highlighting how we’re now at the tail end of the peace process due to settlement construction,” said Rabbi Alissa Wise, director of campaigns for Jewish Voice for Peace, which is lobbying for divestment at the church’s General Assembly.

Christopher Leighton, a Presbyterian minister who is the executive director of the Institute for Jewish and Christian Studies in Baltimore, said one reason he feared divestment would pass was that typical delegates to assemblies are not necessarily steeped in each issue under consideration.

“The vast majority of Presbyterians don’t know these issues or the historical religious complexity of the region,” Leighton said. “What they’re bombarded with is ‘Palestinians are suffering terribly. If we don’t do something about it we become complicit in an injustice.’ The arguments put forth traffic in all kinds of stereotypes that require work to undo.”

Leighton was outspoken in his criticism of “Zionism Unsettled,” the study guide published in January by the church’s Israel/Palestine Mission Network. The guide targeted what it called “the theological and ethical exceptionalism of Jewish and Christian Zionism, which have been sheltered from open debate despite the intolerable human rights abuses rooted in their core beliefs.”

Rabbi Noam Marans, the American Jewish Committee’s director of interreligious relations, said the combined damage of the study guide and the passage of divestment overtures would likely have consequences for Jewish-Presbyterian ties, although he did not want to outline them until the assembly had finished.

“Depending on which resolutions pass, and they may yet evolve, we will have to make challenging decisions,” said Marans, who will attend the assembly. “It certainly is an ongoing crisis in Presbyterian-Jewish relations.”

But Wise said that linking the divestment bid to the study guide is “opportunistic.”

Each was generated by a different church body, she noted — “Zionism Unsettled” by the Israel/Palestine Mission Network and the divestment overtures by the church’s investment committee, the Mission Responsibility Through Investment. The investment committee had been considering divestment since 2004, a decade before the study guide was published.

“To bring ‘Z.U.’ into this process is disrespectful to how intentional the Presbyterian community has been,” Wise said.

“Zionism Unsettled” was praised as “smart and gutsy” by the co-chair of Jewish Voice for Peace’s rabbinical council, Rabbi Brant Rosen, in a blog post republished on the group’s website.

The Rev. Katharine Rhodes Henderson, president of the Auburn Theological Seminary, said there was considerable overlap between the Israel/Palestine Mission Network and those promoting divestment. She said they shared an agenda informed by the boycott, divestment and sanctions, or BDS, movement.

“The stakes are very high,” said Henderson, who criticized “Zionism Unsettled” and will advocate against divestment at the assembly. “In my mind, all of these things go together, you can’t pull apart motives. Divestment today may mean full-out BDS tomorrow, and that’s the decision that Presbyterians face.”

One veteran of pro-Israel outreach among Presbyterians said he was close to giving up.

“At this point, we’ve done a lot to educate the Presbyterians about what’s going on in their church,” said Dexter Van Zile, the Christian media analyst for CAMERA, a pro-Israel watchdog.

Van Zile, a veteran of such assemblies, said he will not be heading to Detroit.

“Let the General Assembly decide and the church live with the consequences,” he said. “For the G.A. to affirm the agenda of its so-called ‘peace activists’ would basically be a punch in the nose to the Jewish community.”

But pro-Israel groups are not giving up.

The pro-Israel groups plan to counter what they say is the mistaken impression of sentiment among young Jews created at past Presbyterian assemblies by pro-divestment groups such as Jewish Voice for Peace. A letter opposing divestment signed by more than 1,500 rabbis, cantors and seminary students of all streams of Judaism also will be circulated at the assembly.

As in years past, a pillar of organized Jewish pushback will be showing that left-leaning and dovish Jews also oppose divestment.

Rachel Lerner, J Street’s senior vice president for community relations, who has made the pro-Israel case to church groups in the past, said she had decided not to attend this year’s assembly because of the time commitment. She changed her mind, however, when she read “Zionism Unsettled.”

“It portrays Zionists as pathological and racist and scarred and unable to act in any normal way,” she said. “It ran contrary to everything I think Zionism stands for. I was personally offended by it. I think it says something about the movement, where divestment is coming from and who it is coming from in the church.”

Lerner said that should divestment succeed, it would challenge friendships she had made with church officials.

“I don’t anticipate cutting them off, but it puts a strain on them,” she said.

John Wimberly, a co-convenor of Presbyterians for Middle East Peace, a group that works with mainstream Jewish groups, said “Zionism Unsettled” may prove helpful in his efforts to defeat the divestment overtures at the assembly.

“There are Presbyterians who are very upset with Israel’s policies toward the Palestinians and would like to find a way to make a statement about that treatment,” he said. “But they will not make the statement by voting for people whose intention is to destroy Israel.”

The challenge, he added, would be to “keep that clear so the other side is unable to create enough smoke to hide that agenda.”