Parents of kidnapped U.S.-Israeli teen: ‘Israel will bring you back’ 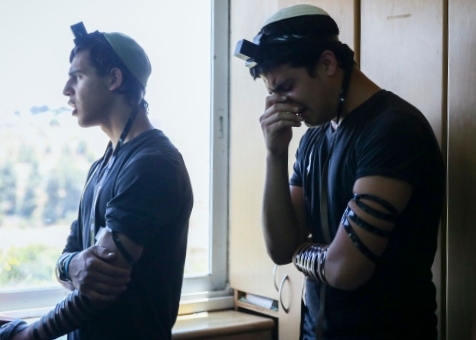 JERUSALEM (JTA) — The parents of Naftali Frenkel, one of three teens kidnapped last week, assured their son that “Israel will bring you back.”

“Naftali, Mom and Dad and your siblings love you to no end. Know that Israel is turning the world upside down to bring you home,” Rachel Frenkel said in a message to her son during a meeting with reporters on Sunday afternoon in Nof Ayalon, a city in the center of Israel near Modiin where the family lives.

It was the first time that the parents of the 16-year-old boy, a dual Israeli-American citizen, have addressed the media since the kidnapping Thursday night.

Naftali Frenkel; Gilad Shaar, 16, from Talmon, a West Bank settlement; and Eyal Yifrach, 19, from Elad, near Petach Tikvah, were last seen trying to get rides home from a yeshiva high school in Gush Etzion, a bloc of settlements located south of Jerusalem.

“We are optimistic, with God’s help, He will see the combined effort of the prayers and solidarity, and we will embrace Naftali, Eyal and Gilad here,” Frenkel said.

Later in the day, Shaar’s mother, Bat Galim, offered similar sentiments in a briefing with reporters in Talmon.

Frenkel, who is a U.S. citizen, said the U.S. Embassy in Tel Aviv has been “very supportive.”

“We are grateful to every soldier in the field, Knesset member, parents of soldiers and the media for bringing our story to the world,” she said, adding that the family has been in constant touch with the Israeli army, police, the Shin Bet security service and government representatives.

Frenkel also praised her family, friends and neighbors for looking out for her, her husband and her six other children since the start of the episode.

A Nof Ayalon resident told JTA that community residents have been instructed not to talk to reporters.