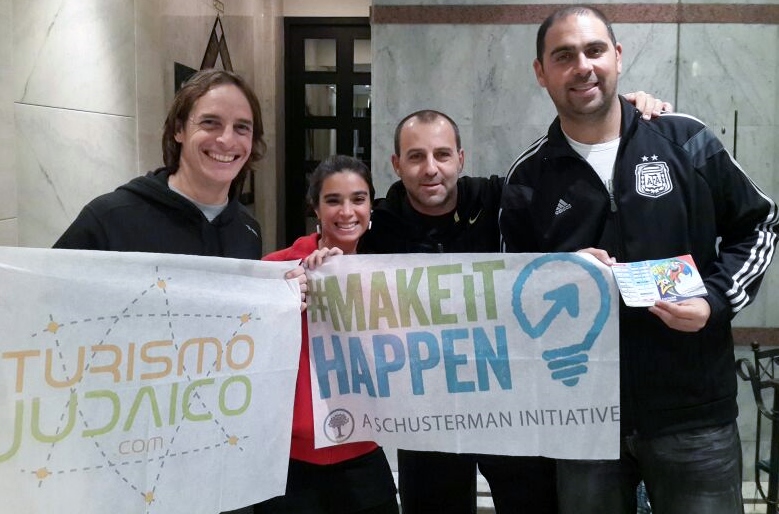 (JTA) – When Argentina plays its opening-round matches in the World Cup, Mariano Schlez of Buenos Aires will be screaming his support from the stands.

But taking in his home country’s matches in Brazil isn’t all that will be occupying Schlez for the first fortnight of the monthlong soccer spectacle.

Also filling his calendar are 14 “Jewish” events that he and his wife have organized in seven of the host cities. They include Shabbat evening prayers, beach soccer games leading into Saturday night Havdalah services, pickup games and Jewish heritage tours.

For Schlez, 38, and his wife, Paola Salem, 37, the World Cup being played in the region prompted them last winter to mull opportunities to fashion Jewish experiences for fellow soccer fans. They figured on organizing two or three activities.

Now, though, “the project is bigger than we’d thought at first,” Salem said.

Their goal was to bring together international Jewish visitors already united by a passion for soccer – known throughout the world, but not in America, as football.

“It’s great to connect Jewish football fans,” Schlez said Thursday after arriving in Rio de Janeiro. “I love football, I’ve played it all my life and I’m a teacher of lots of kids in this lovely sport, so it was an opportunity to make a connection between my love for football and my Jewish life.”

His friends Maxi Klein and Damian Beker joined him on the 1,800-mile, three-day drive from Argentina. They’re helping out in the Jewish programming, too. All three work for the Maccabi youth sports organization in Buenos Aires.

While remaining at home with the couple’s two children, Salem is serving as a one-woman command center, responding to inquiries posted on the project’s two Facebook pages – Jewish Soccer Fanatics Traveling to Brazil in 2014 and Jewish Connect at the World Cup Football 2014 – along with maintaining communication with Brazilian Jewish organizations helping to organize the events in the seven cities: Belo Horizonte, Fortaleza, Manaus, Porto Alegre, Recife, Rio de Janeiro and Sao Paulo.

Fans from approximately 20 countries have exchanged information on the Facebook pages about the events and such key matters as procuring World Cup tickets and places to stay, she said.

Those wishing to attend any of the Jewish events – all are free – must register, with Salem passing along the information to security officials at the venues. Volunteers are offering their services through Facebook.

Salem said she budgeted for $9,000, with $5,000 covered by a grant from the Tulsa, Okla.-based Charles and Lynn Schusterman Family Foundation. Large and small businesses donated funds and products, while others provided discounts for printing promotional flyers and embroidering the 400 kippahs that Schlez brought along to give away at the Shabbat events.

At the Havdalah services, soccer-themed note paper will be distributed for participants to write messages heralding the coming week. The messages will be collected and displayed, Salem said.

The gatherings promise to be a multicultural cholent that thrills Salem.

“Connecting Jewish people from all over the world is what I love,” Salem said. “It’s like a dream.”

The dream began taking shape at a family dinner when Schlez, a longtime fan of the Boca Juniors team – Diego Maradonna, who led Argentina to the 1986 World Cup title, was his favorite player – expressed a desire to attend the Brazil tournament. The couple mulled programming ideas before approaching the Schusterman foundation.

Returning from a camping trip in January, they learned that their grant request was approved. That’s when the planning gears really started churning.

The World Cup programming dovetails with the aim of Turismo Judaico, a company Salem launched to provide Jewish travelers with information such as Shabbat candle-lighting times, kosher dining options, and sites of cultural and religious interest.

“We think that young adults are the levers of change in the Jewish world and in the world Jewishly,” Cohen said, and the Brazil events bring “a Jewish lens to an experience the entire world is watching.”

“The eyes of the world are on Brazil. Let’s shine a light on the Jewish community there as well.”