At prayer vigils, Israelis gather in moment of unity over kidnapping 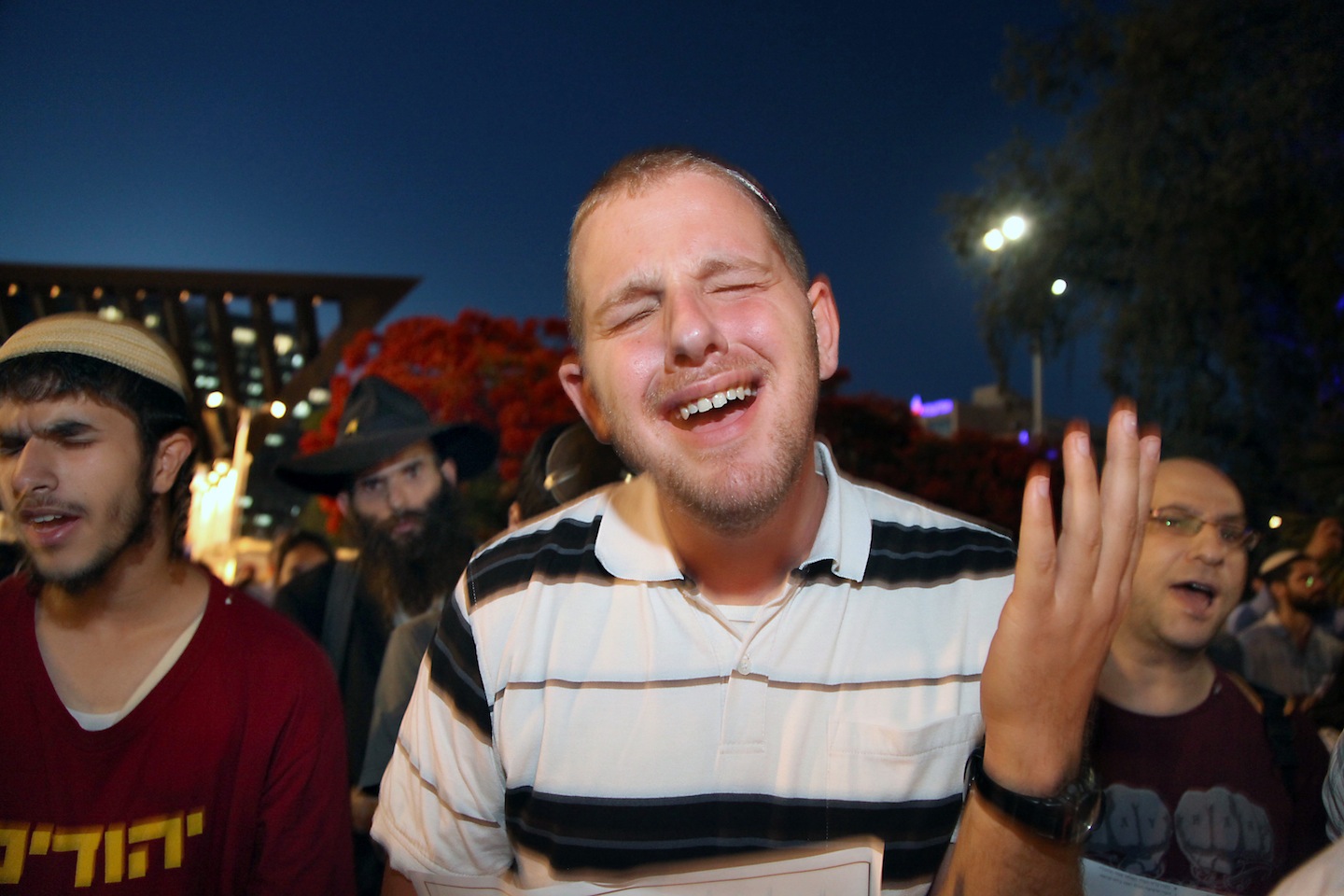 Rabbis delivered speeches, singer Yonatan Razel performed two pieces based on liturgical invocations of God’s mercy, and a prayer was recited for the safe return of Gilad Shaar, Naftali Frenkel and Eyal Yifrach, who were kidnapped last week while hitchhiking from the West Bank settlement of Kfar Etzion.

Nearby, the calm warmth of summer in Israel seemed to take the edge off the anxiety a little. Children played and babies cried. Adults snapped pictures on their smartphones.

Such a beautiful day, such a terrible thing.

Last week’s kidnapping brought Israelis together as few things do in this divided nation. Thousands joined prayer vigils across the country, including a massive one Sunday at the Western Wall in Jerusalem.

News — or lack thereof — about the kidnapped teens is dominating life here, from news reports to conversations among friends in cafes, prompting a rare thaw in the political and religious debates that typically overshadow Israeli discourse.

Rabbis at the vigil in this Tel Aviv suburb on Sunday night mostly stayed away from politics, sticking to broad mantras of solidarity with the prisoners — two 16-year-olds and a 19-year-old — and faith in God. The only exception was Rabbi David Stav, who called for the release of Jonathan Pollard, the American defense contractor convicted of spying for Israel in 1985. Pollard’s case is controversial in the United States, but the call for his release is a near-consensus issue in Israel.

“It’s like we were all kidnapped,” said Rabbi Eliezer Elbaz, the chief rabbi of Givat Shmuel. “This did not happen for nothing. This must awaken us to soul searching.”

Most politicians steered clear of divisive statements, too. The boys belong to all of us, said government ministers from left and right. On Facebook or in speeches, they repeated safe declarations of zero tolerance for terror and expressed sympathy for the families, even refusing to answer questions about what this means for deteriorating Israeli-Palestinian relations.

On Monday, Israeli Prime Minister Benjamin Netanyahu spoke with Palestinian Authority President Mahmoud Abbas for the first time in a year. Netanyahu has blamed the recent reconciliation between Hamas and Abbas’ Fatah party for creating conditions that enabled the kidnapping, but most other Israeli government ministers have avoided such statements.

Coming from people who just days ago accused each other of bringing the country to ruin, the constant declarations of unity seem a little performative. And the solidarity evident across the country feels fragile, threatened to be forgotten amid the small inconveniences of daily life or swallowed up by the existential questions that serve as the backdrop to this tragedy.

Radio reports from the Israeli military’s chief of staff came sandwiched between the latest pop music hits. Even at the vigil, as Razel came onstage, hands holding smartphones rose up from the crowd to record the performance.

Israelis, of course, are experts at this sort of juxtaposition, famous for reboarding buses or casually sipping espresso in cafes that were recent scenes of terrorist carnage. Surely this national focus on the teens’ plight too will pass and we’ll all soon enough return to the ideological battles that are the norm here.

Writing on Facebook, Yesh Atid lawmaker Meir Cohen all but promised as much.