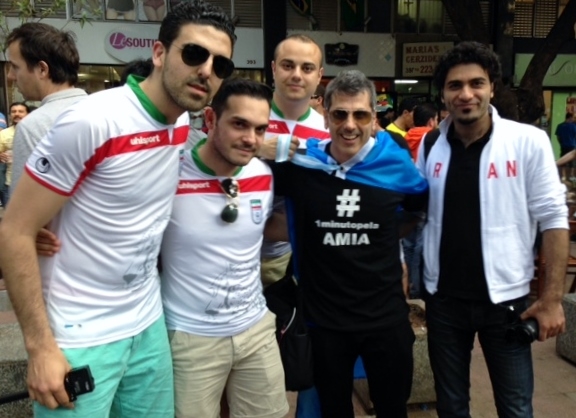 Fabio Kornblau, a former member of the AMIA Jewish center board, posing with Iranian soccer fans before the Argentina-Iran match at the stadium in Belo Horizonte, Brazil, while wearing a T-shirt with the "One minute for AMIA" motto in Spanish. (Courtesy Fabio Kornblau)
Advertisement

(JTA) — Latin American Jews held several demonstrations in Brazil prior to the Argentina-Iran World Cup match in memory of the victims of the 1994 Jewish center bombing in Buenos Aires.

One of the three demonstrations held Saturday was in front of Mineirao Stadium in Belo Horizonte, where Argentina defeated Iran, 1-0. The others were held at Copacabana beach in Rio de Janeiro and at the Museum of Art in Sao Paulo.

Argentine justice officials suspect Iran of being responsible for the AMIA center attack, which killed 85 and injured hundreds.

The demonstrations included a moment of silence and a reading of victims’ names. Signs and banners read “20 years without justice” and “A red card for lack of justice.”

“We organized the activities to remember that on July 18 there will be 20 years without justice,” Roberta Lavelberg, a Jewish activist from Sao Paulo, told JTA.

The World Jewish Congress failed in its attempt to convince FIFA, international soccer’s governing body, to hold one minute of silence in the stadium before the match.

Facebook featured a “One minute for AMIA” initiative by Brazilian youth to hold the moment of silence.

Fabio Kornblau, a former member of the AMIA board in charge of its youth department, said a Brazilian friend prepared a T-shirt for him with the saying; Kornblau took a photo with Iranian soccer fans while wearing the shirt.

“I traveled from Argentina to Brazil to see only one match: the match against Iran,” he said.