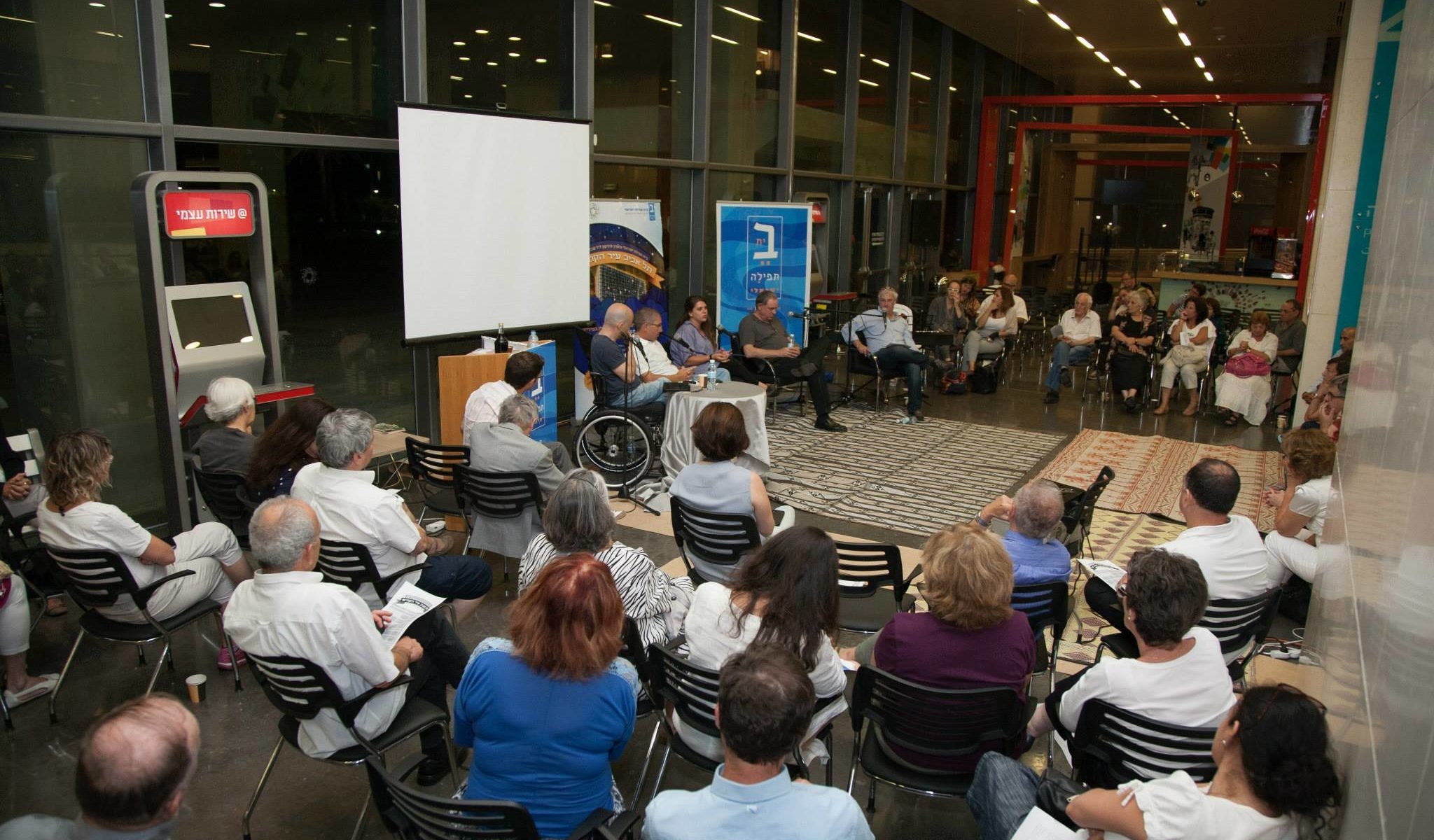 TEL AVIV (JTA) — At 3:30 Shavuot morning, more than 100 people are seated on folding chairs singing in Yiddish as men walk around with shots of vodka and cups of coffee. Up front, a man in a black frock coat and black hat is belting out the notes, his eyes closed.

Except for the live instruments and free mingling of men and women, the scene would have been common in any of the many haredi Orthodox communities of Jerusalem. But in a room at City Hall in Tel Aviv, Israel’s historically secular metropolis, it was something new.

“It’s very important to strengthen the voice calling for pluralism from many directions,” said Mickey Gitzin, a first-term councilman from the left-wing Meretz party who provided municipal space for the all-night study program organized by the liberal prayer group Beit Tefilah Israeli. “We let the right completely decide what our Judaism will be, and as soon as we fight for an open, pluralistic Judaism, we’ll have more strength in the fight over Israel’s identity.”

Historically, the pluralism fight has been focused mainly on breaking the Orthodox monopoly on government religious services such as marriage and conversion. But Gitzin and others are taking a different tack, aiming to build up the non-Orthodox sector through increasing government support.

The effort comes at a time when Israelis are beginning to self-identify religiously in more nuanced ways, breaking the once neat division in Israeli society between Orthodox and secular. A 2010 survey found that a quarter of Israeli Jews defined themselves as neither Orthodox nor secular but “traditional,” a term that connotes the embrace of certain Jewish customs while not committing to the full observance of Jewish law.

Another recent poll found that a majority of Israelis support more Jewish cultural and educational programming in public schools and public spaces. Israelis are also voting with their feet for non-Orthodox programs, a development some activists have begun to call a “Jewish renewal.” The Tel Aviv municipality’s first-ever all-night Jewish study program was one of 10 non-Orthodox events held this year in the city on Shavuot, the springtime festival when it’s customary to stay up till dawn studying Torah.

“People are looking for community and want to reach the deeper parts of their identity, but don’t want to give themselves old definitions,” said Lior Weintraub, the CEO of Shearim, a lobbying outfit funded by several American Jewish groups that commissioned the 2010 survey and pushes Knesset members to support financing for non-Orthodox groups. “They won’t say ‘I want religion, so I’ll take it as the haredim present it, as the religious Zionists present it.’ [But rather] ‘I want to consume it and connect to it how I want.’ ”

Despite the growth of non-Orthodox programming, state funding has not kept pace. Shearim estimates that until 2013, government funding of non-Orthodox Jewish groups stood at roughly $700,000 per year, most of it coming from the Education Ministry.

Since Shai Piron became education minister last year, funding has risen to nearly $3 million annually. Piron is a member of the centrist Yesh Atid party, which rode a wave of popular resentment against haredi Orthodox privileges to become Israel’s second-largest party in 2013 elections.

The number, however, is still tiny compared to funding for Orthodox institutions. Israel’s Chief Rabbinate, for example, receives about $7 million in state funding. Including local municipal chief rabbis, the total balloons to approximately $160 million, according to Hiddush, an organization that promotes greater freedom of religion in Israel.

Weintraub would like funding for liberal Jewish groups to multiply and plans to lobby the government to increase funding to non-Orthodox schools, pre-military academies and informal study programs.

Yizhar Hess, the CEO of the Israeli Conservative movement, says that as long as the Orthodox government monopoly exists, that’s precisely the tactic liberal Jewish groups should embrace.

“In Israel there isn’t separation of religion and state, so we must make sure that there will be equal funding to the different streams and aspects of diverse Jewish life,” he said.

But others see the growth of non-Orthodox Jewish life as separate from state investment. Yesh Atid lawmaker Aliza Lavie, a member of the Knesset’s Religion and State Caucus, said the core strength of liberal Jewish groups in Israel comes from grassroots activism, not government funding.

“It’s supported from the ground up,” Lavie said. “It didn’t bloom in the Education Ministry or the Public Diplomacy Ministry. It came from a generation asking questions.”

Gitzin’s city council work already has brought concrete benefits to some Tel Aviv groups. Due to his efforts, the city publicized and provided public space for the liberal Jewish study programs on Shavuot and is now working to find permanent space for non-Orthodox groups in various locations in the city. He also hopes to organize pluralist Shabbat programming in city community centers and bring non-Orthodox teachers to teach classes on Jewish heritage in public schools.

Both Gitzin and Weintraub hope their efforts will spark less controversy than campaigns to roll back haredi privileges in Israel, which have led to massive street protests and acrimonious political conflict. But Reform Rabbi Uri Regev, the head of Hiddush, says pluralism advocates also must work to break Orthodoxy’s monopoly on marriage, divorce and conversion.

“This is a very partial segment of the picture and [is] not understanding the all-encompassing need for renewal,” Regev said. “Major life-cycle celebrations remain the monopoly of the Orthodox rabbinate.”