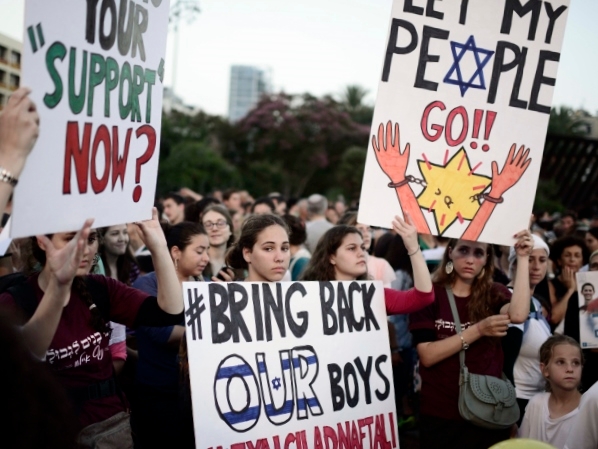 JERUSALEM (JTA) — The parents of the three kidnapped Israeli teens visited the West Bank junction from where their sons were abducted hours before a massive solidarity rally in Tel Aviv.

During Sunday’s visit to Gush Etzion, located south of Jerusalem, the parents of Naftali Frenkel, Gilad Shaar and Eyal Yifrach thanked the soldiers working to find and return the teens, who were abducted on June 12.

They also visited a nearby army base, handing out care packages to the soldiers who have been arriving from across the country and touring the area with security forces.

At the rally, tens of thousands of Israelis called for the teens’ release.

In a statement issued before the meeting, Peres said, “I met with the families of the three kidnapped boys and they touched my heart; all of Israel is with them. The United Nations is an important organization which represents the world — it is your responsibility to cry out on behalf of the mothers of the kidnapped boys and call for their immediate release.”

Peres called on the United Nations to “raise a moral cry and condemn terror on behalf of the entire world. I know how much the situation in Gaza concerns you, but we must speak honestly — the one who is responsible for that is Hamas which runs Gaza and leads to terror and poverty — we have a moral responsibility to condemn Hamas and fight against all terrorism.”

Israel last week named two Hamas operatives as being responsible for the kidnapping of the teens.

Ban stressed that the United Nations unequivocally condemns the kidnappings and said, “I have already issued a statement on the kidnapping of the young Israeli students. Under any circumstances, for any reason, it cannot be justified. It is totally unacceptable.”